Our weather has gone bipolar here in the Bay Area. We’ll have two days of 80 degree humidity, and then the skies will falter to an overcast 55, with a wind chilly enough to send you clamoring for your scarf. Then, the next day, we’ll have a few overcast days where the thermometer manages to reach 74 while the sun has yet to peek its heads out from behind the clouds.

You know those kinds of days, when you look outside and see fog, decide to grab a coat on your way out, and then you’re doused in sweat within two minutes of stepping out of your front door. Those are the days when I feel out of sorts, like my body and the weather are at odds, like I’m expecting one thing but getting another. The color of the light doesn’t match how I feel, and my brain can’t seem to make a connection between my insides and my outsides.

If I have enough of those days in a row, I get sick.

I’ve spent the past ten days tormented by some terrible demon plague of the magnitude I don’t usually experience. Thankfully I had my wonderful boy to take care of me, though in the end he got terribly sick, too (which is odd, because he’s the one who gave it to me to begin with!).

Now that I’m feeling better – only marginally, unfortunately – I’m craving comfort food. I want to fill my belly with all sorts of familiar things, especially sweets. But my body needs to be taken care of, and a huge bowl of pudding just isn’t going to cut it. That is, unless it’s made with healthy ingredients.

That’s when Amy Green magically appears onstage with a *poof*. Her new book, Simply Sugar and Gluten-Free: 180 Easy and Delicious Recipes You Can Make in 20 Minutes or Less, is like Santa’s bag of toys with it comes to recipes that don’t push you over the glycemic edge (she has a blog, too, that I highly recommend). Packed with 180 recipes for those of us trying to avoid sugar and gluten, she caters to the gourmet side of food allergies. Cooking and baking from this book, you’ll never feel deprived.

A few of my personal favorites from Simply Sugar and Gluten-Free:

When craving something sweet that’s on the healthier side of the dietary spectrum, a lot of people tend to forget that you can bake lovely things with whole grains. Take quinoa, for example. It’s not just for savory dinner-type dishes – with a little creativity, it turns into a most satisfying dessert.

Below you’ll find Amy’s recipe for baked quinoa pudding with raisins, a dish that will satisfy your cravings for something warm and comforting without treading into refined sugar and white flour territory. If you like it a little sweeter, I’d recommend adding a tablespoon or two of molasses, which imparts a nice brown sugar flavor without adding a ton of extra carbs.

And by the way, it makes a great breakfast, too! ;) 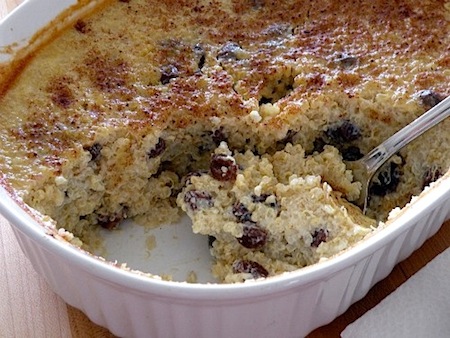 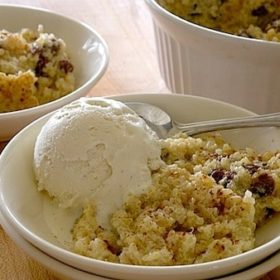 This baked quinoa pudding will satisfy your cravings for something warm and comforting without treading into refined sugar and white flour territory. If you like it a little sweeter, I’d recommend adding a tablespoon or two of molasses, which imparts a nice brown sugar flavor without adding a ton of extra carbs.
0 from 0 votes
Print Pin
Course: Dessert
Cuisine: French
Prep Time: 25 minutes
Cook Time: 25 minutes
Total Time: 50 minutes
Servings: 8 servings
Calories: 237kcal
Author: Amy Green

Nutritional analysis does not include whipped cream for serving.

If you like cooking desserts with quinoa, try this Quinua con Leche (Quinoa Milk Pudding).