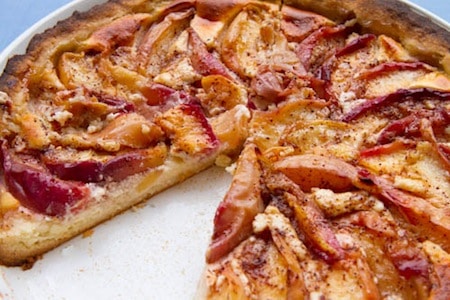 Bavarian torte recipe is from someone entirely new to food blogging. For my birthday, Thadeus decided to make me a huge dinner, complete with dessert. And, it was all from scratch (perhaps to say thanks for the strawberry-peach cobbler I made a few days prior). Considering I’ve never had a guy cook a big meal for me before – at least guy that I was dating – the whole experience was a revelation. I could totally get used to being treated like this.

Even though he doesn’t talk about it much, Thad’s a pretty adept cook. He’ll mention in passing the minestrone soup he makes for his family, the tri-tip he grills during the summer, or the favorite banana bread recipe that was handed down from his grandma. He seems to think I’m the gourmet in this relationship, but he’s giving me a run for my money! At this rate, we’re going to be engaging in a culinary deathmatch before our first anniversary.

Here he is to share his adventures in torte making.

I’m peering into the ditch that I somehow dug; on a whim I said I would make a birthday dinner for my girlfriend. I can cook and bake. Honestly! I can! Though this is special: it’s her birthday, and she happens to be the beautiful girl that writes this blog. So, back to that ditch…..

Cooking for your girlfriend is the best thing a guy could ever possibly do to make her swoon, gush, or feel like she is the only person in the world that you have ever cared about. It really is that powerful, and you can rest assured she will talk about it to all her friends who will also swoon over what you did and wonder why their boyfriends’ idea of cooking is fast food. It’s like winning the lottery, the Nobel Peace Prize, and being crowned Champion of the Earth all at once! First, however, you have to cook.

Since I lived in Frankfurt, Germany, till my second year of college, I decided that an entirely German meal was in order. I wanted to make something for Steph that I grew up eating and was close to my heart. The menu for the night would be weisen held (rosemary stuffed roasted chicken, liberally salted), gurken salat (cucumber salad that marinates in a vinegar/sugar dressing for at least four hours), spargel (asparagus), and for desert, a Bavarian torte recipe.

I decided on this meal because I could get it virtually anywhere in Germany, and it really reminds me of Bavaria, the southernmost state. I love Bavaria, Bier Halles at Oktoberfest in München, or skiing in the German alps at Garmish-PartenKirchen, but summer in Frankfurt holds all my favorite memories: weird bugs flying around, humid weather with thundershowers, staying light out till 10:30pm or longer, and picnics with my dad’s squadron. Everything I made for Stephanie is comfort food for me, but also a real taste of Germany. The menu also made for conversation about the different regions of Germany, and how language and food differ from region to region (such as, hendl is the southern German word for ‘chicken’).

I decided that the first thing I would make is the torte for dessert – the most important dish. It’s light cream cheese filling goes well with apples or any other fruit you choose. This is definitely a dessert that packs a visual punch and doesn’t disappoint when eating it. The torte is very rich, though the fruit keeps it from being too overloaded. It’s one of those ‘just one more slice’ dishes for certain!

This Bavarian torte recipe is a very easy dessert to make, and the cream cheese filling works with any type of fruit that you decide to use. I’ve had it with apples, cherries, nectarines, and assorted mixed berries. I happened to choose nectarines for this torte, but with such a wide selection of fruits in California, I could have chosen anything.

Making the crust is really easy, since it only consists of 3 key ingredients: flour, sugar, and butter. You can use a fork to mash it all together so it’s one blob. Make sure that the texture is consistent throughout, then put it in a 9-inch pie plate and press it evenly all over the bottom and the sides. Making the cream cheese filling is just as easy — just mix the cream cheese and sugar together, and it’s ok if it’s a bit lumpy. Beat in the eggs and vanilla, then pour the entire mixture over the crust.

Take the fruit and add the sugar mixed with the cinnamon, coating everything. You can get creative laying out the fruit on the cheese filling; semi-circles to the middle, or one long spiral from the outside in. However you do it, just make sure it’s pretty evenly distributed.

How did it taste? Steph loved it! We both had seconds, then took some over to a friend’s house for dinner the following evening. It was gone too fast, though our hosts that night loved it.

All things considered, I think I really surprised her with my level of culinary skills, and the fact that I could actually make anything I wanted, with minimal help. Now, as for being Champion of the Earth? Well, yeh, I don’t think I’m winning any awards for that, but I have Stephanie’s heart, and that is all I ever need.

While I use nectarines here, the traditional recipe calls for apples. If you use apples, I recommend that you use Granny Smiths. The tartness works so well with the sweetness of the filling, which perfectly suits the apple flavor. Also, if you do use apples, you need to cut the skin off. Other fruits you don’t need to. You only need about 4-5 pieces of fruit if they are about tennis ball size. Cut them into 1/2″ slices. 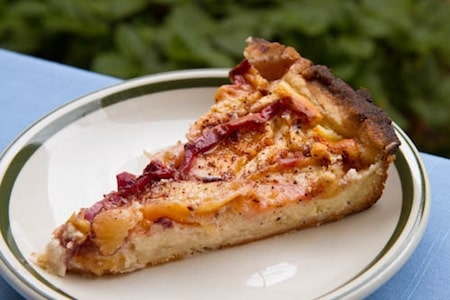 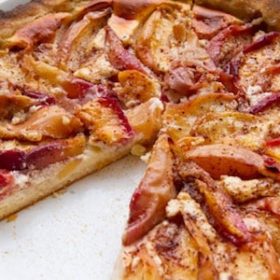 If you like this Bavarian tart recipe, check out these others: