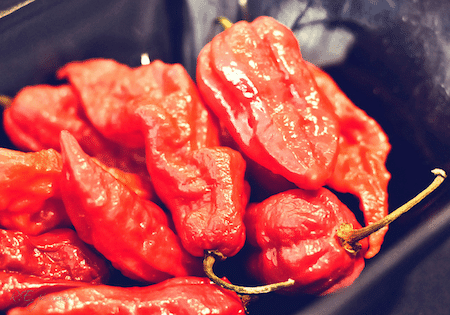 A few months ago, I was in New York with some good friends, shopping for whatever interesting culinary tidbits we could find. We were visiting the Chelsea Market when I found a little jar of salt, wrapped in innocuous-looking paper and tied with a little brown bow. The label read: “Ghost Pepper Salt, infused with ghost pepper extract.” I’d heard of of these little capsaicin bombs before and feared them greatly, due to this video – yikes! But I have a friend who loves spicy food, so I grabbed the jar as a gift. The warning sticker said, “Use only one or two grains of salt,” which made me giggle. I threw the salt in my bag and continued shopping.

About ten minutes after buying the salt, I noticed that my face was burning. My jawline, the right side of my nose, and just above my eyebrow were on fire. After a few minutes of irritating scratching that was only making it worse, I realized that I’d gotten some pepper oil on my face – just from handling the $&#^$*&@^ jar. Dammit! These peppers are dangerous! Thank god I hadn’t stuck my finger in my eye.

At one point, Casey took us to a spice shop (can’t remember the name, naturally), where Garrett and I found a baggie of dried ghost peppers. Curiosity got the better of us, so we picked up a bag to share. I figured anything that potent was worth looking into, in the name of furthering my culinary savvy. We split the bag, and I brought my half back to the Bay Area and promptly forgot about them.

A little background. The ghost pepper, or Bhut Jolokia, is noted by many to be the hottest pepper in the world. Grown in India and Bangladesh, this small, red chili weighs in at 855,000 Scoville heat units (or SHU). To give you a better idea of what that means, Tabasco sauce is somewhere around 3,000 SHU. There’s enough capsaicin in the ghost pepper to cause serious bodily harm if you consume too much – just watch the video I linked above for an idea of what it will do to you. Example: these peppers are used in grenades by the Indian Defense Department, and have been added to smoke bombs used to subdue angry elephants. What does that tell you?

Note: Earlier this year, Guinness snatched away the title of “world’s hottest chili” and awarded it to the infinity chili (1,067,286 SHU). Then a few weeks later the organization named the naga viper pepper (1,382,118 SHU), a hybrid from England, as the world’s hottest pepper. 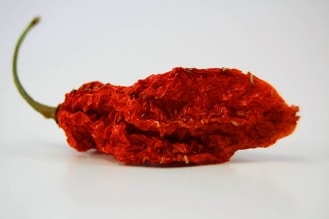 A few weeks ago, I found the bag of peppers and decided to experiment. With others, of course. I threw a few chilis into a small bag – making sure not to handle them with my bare hands – and took them down to The Boy, who is purported to have a high tolerance to spicy foods. And I accidentally left the remaining peppers in a tiny ziploc sitting on the counter at my dad’s house.

I showed the peppers to The Boy, who eagerly took a nibble of a tiny flake. Then he just stood there, turning a funny shade of pink. I asked him how it was, and he said it was hot, but not too hot. Surprised, I pressed further. He repeated that it wasn’t so bad, and then I noticed him heading to the fridge for a glass of milk. Which, if I remember correctly, was followed by a second glass of milk. Not too hot, eh? ;) 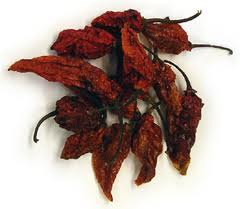 A few days later, I get a call from my stepmother.

Her: “So, those peppers you left here. What are they again?”
Me: “Ghost peppers. They use them to make pepper spray for rampaging elephants, so I wouldn’t touch them. Why?”
Her: “Well, heh, dad ate one.”

Turns out my father, who has a habit of eating anything and everything that isn’t bolted down (gee, I wonder where I get it?) had walked by the bag of peppers too many times to resist their call. He’d nibbled on the edge of one, decided it wasn’t too spicy, and then went back for another bite. What happened after that isn’t clear, since no one seems to remember, but according to my dad, he’s not going back for another bite.