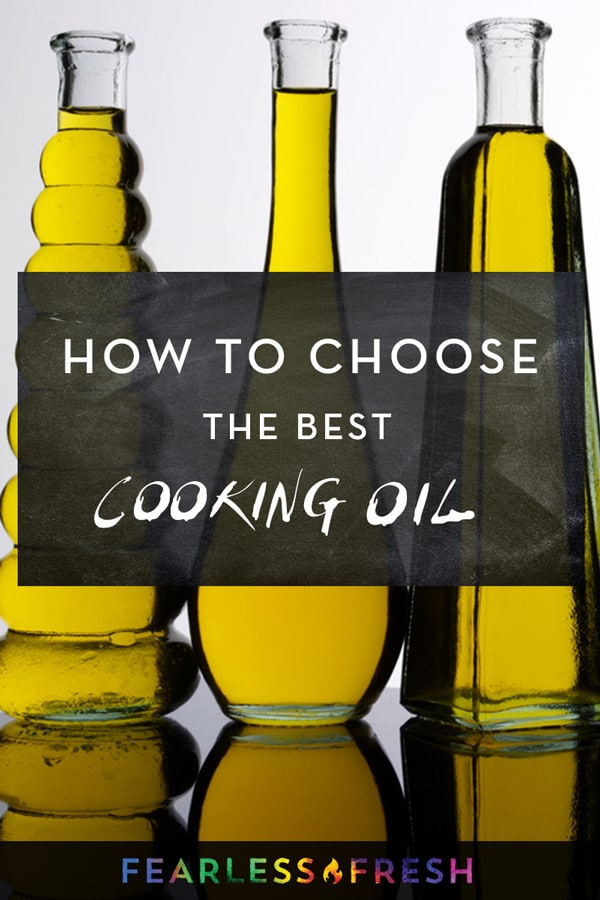 Have you ever wondered how to choose the best cooking oils for your kitchen? I get this question a lot — especially when I posted my sweet potato chips recipe — and today we’re going to answer it. I’m very excited to welcome Rachel Andorfer as a guest poster here on Fearless Fresh, because this girl KNOWS HER SHIT when it comes to oil. In fact, she blogs all about oils on her website, The Essential Girl.

I thought I had a strong knowledge of cooking oils, but she put me to shame. And because I’m one of those people who wants to deliver the real story wherever I can, I’m going to let her do it way better than I can. ?

– – – – – – – – – – – – – – – – –
When it comes to choosing the best cooking oils, there are dozens of options on the market these days. You can choose from canola, olive oil, coconut oil, or (if you’re feeling adventurous and have a few extra dollars) go for something more exotic like avocado oil. The choices can seem endless, and we’ve been told that vegetable oils are lower in saturated fats which is good, right?

However, there’s more to choosing the best cooking oil than price and type of fat.

Cooking oils have two properties that should be considered when deciding on an oil for a specific application: smoke point and oxidative stability. Both of these are temperature-dependent properties of oils that define how quickly they break down and either burn or become rancid.

How Are Cooking Oils Damaged?

There are two major ways that cooking oils can break down: age and high heat.

Let’s start with age. As with anything in this world, even the best cooking oils degrade over time. Through exposure to heat, light, and oxygen, all oils will eventually become rancid, breaking down into nasty free radicals. This is easy to avoid by following these tips:

In most cases, your choice of the best cooking oil probably won’t depend on the shelf life of your oil, but make sure you aren’t buying that super expensive oil and then using it only for ‘special occasions.’ I know it can be tempting to use something like avocado oil sparingly, but keep track of its use-by date to avoid eating a rancid oil.

Make sure you aren’t buying that super expensive oil and then using it only for ‘special occasions.’

The more common way oils are damaged is with high heat. At high heat, oils either burn or form free radicals (similar to an accelerated aging process) and aldehydes (the most common aldehyde is formaldehyde).

Some oils are more susceptible to this heat damage than others. Unfortunately, traditionally healthier cooking oils which are high in polyunsaturated fats and low in saturated fats are the most susceptible to heat damage. This is because an unsaturated fat is, well, unsaturated. This means that the fat molecule is not carrying the maximum amount of oxygen atoms. Due to these empty molecular spaces, the fat is unstable, and more prone to oxidation (aka loss of electrons). This oxidation is what produces the free radicals and aldehydes.

What Cooking Oils Are Safe to Use?

As I said above, oils that are high in healthy unsaturated fats tend to be the most susceptible to high heat damage, making them unsafe for cooking. So which are the best cooking oils when it comes to safety? Unfortunately, the answer isn’t black and white. There are two properties of oils that contribute to heat damage: smoke point and oxidation stability.

Cooking oils all have a smoke point, or a temperature at which it begins to burn and smoke, and begins releasing toxic degradation products into the air. (Plus it ruins the flavor of whatever you’re cooking.) This can vary depending on the source of the oil as well as how refined it is. In general, more refined oils have higher smoke points.

Each kind of cooking oil has an oxidation stability, which is a measure of how easily it can break down into free radicals and aldehydes when exposed to heat. Personally, I would expect oils with high smoke points to have good oxidation stability, however this is just not the case.

Let’s back up real quick: how exactly is oxidation stability measured? It’s actually fairly complicated, but here’s the need-to-know:

So, Which Are the Best Cooking Oils?

Both of these factors must be considered when choosing the best cooking oils for your kitchen, along with the temperature you plan to cook at. Here are the oils I personally use:

So ghee is best for short term, high temperature cooking, while coconut oil is better for longer periods of cooking at lower temperatures. It’s also important to note that refined oils will have higher smoke points than unrefined oils, because solids that would burn faster are removed from the oils. However keep in mind that the refining process tends to lower the nutritional value of an oil, so there is a trade-off.

How hot does oil get when cooking?

Just to give you an idea of what we’re looking at, here are some reference temperatures:

Gas stoves are a little trickier, because turning up the flame increases heat output, not temperature of the flame. But these temperatures can be used as a guide to help you pick the correct oil for whatever it is you’re cooking.

Let’s recap. Here are the things you should consider when choosing the best cooking oils for you:

Rachel is a blogger and Bioengineering masters student who lives in Clemson, SC (go tigers!). After studying conventional pharmaceuticals and how they target specific ailments, she applied that knowledge to figuring out how essential oils can work to treat the same ailments, and ended up creating the blog The Essential Girl. When she’s not blogging or sciencing the shit out of something in the lab, she likes to drink tea, nom on popcorn, and binge Netflix.