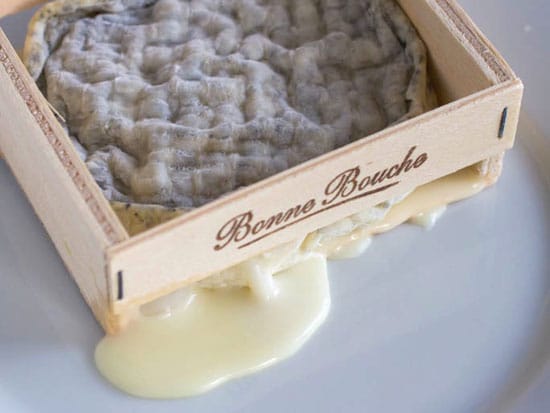 I have a favor to ask. Please, right this very second, go to your local cheese shop and ask for Vermont Creamery’s Bonne Bouche. This little puck of goaty love has become one of my most favorite things in the world, and I want nothing more than for you to fall in love with it also.

Bonne Bouche is a whimsical, intriguing goat cheese. Creamy, rich, buttery, salty, mushroomy, peppery, sour… the list goes on and on. It seems that every person who tastes it takes away something different. My first impression of Bonne Bouche goat cheese was big on salt and funk, but my friend, who sampled the very same cheese right alongside of me, sensed more of a mushroomy impact followed by an assertive sour note. A second tasting revealed a distinct layer of cured bacon, and a third had me swearing I tasted a quick smack of crème fraîche. Bonne Bouche is all of these things, and that’s what makes it such a winner.

This diminutive ash-ripened cheese sits nestled in a darling wooden crate, which gives it a little support during packing and shipping. Bonne Bouche is incredibly runny and should be purchased only when it has lazily relaxed across the entire expanse of said crate, and without the structure of the box, there’s no way this cheese could ship outside of a sealed plastic container (which would prevent the cheese from ripening…and smelling up your refrigerator).

Aged for only 10 days before it leaves the creamery in Vermont, Bonne Bouche reaches perfect ripeness somewhere between 8 and 15 days after that. The inside of the cheese should be entirely smooth and buttery, so if you’ve got an under ripe specimen that is still resistant to the poke of a finger, allow the cheese to ripen in your refrigerator until it relaxes to the point that it nearly melts into its little crate. Then bring it to room temperature, set it on a plate, and allow Bonne Bouche to spread its creamy finger as far and wide as it likes. When you’re done, control your urge to lick the plate. Or don’t. I won’t judge.