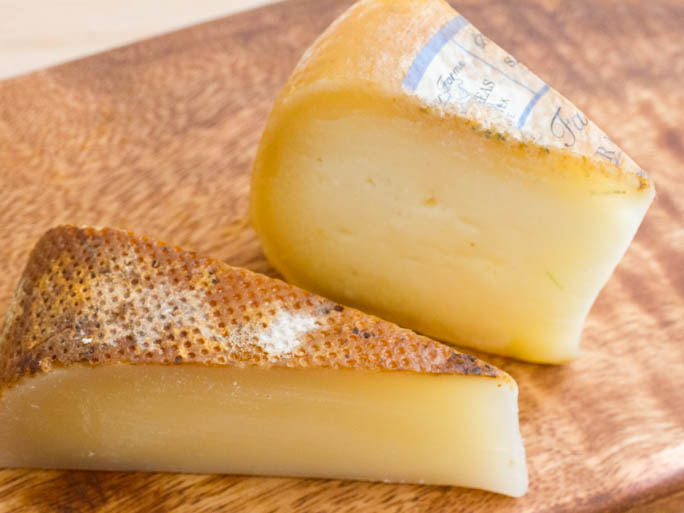 These days, sheep’s milk cheeses dominate my list of favorite dairy treats. For some, they’re an acquired taste, but for others like me, they’re a staple in our cheese drawer. Maybe it’s the luxurious fatty texture—sheep’s milk is incredibly rich, despite the fact that ewes don’t yield that much milk—or perhaps it’s the characteristic grassiness that conjures visions of green pastures and wide-open blue skies.

Regardless of your reasoning, the fact remains that when you sink your teeth into a fine specimen of fermented sheep’s milk, it can rock your world. I have a similar feeling towards mixed milk cheeses, like Andante’s Metronome cheese.

Here’s a list of my favorite sheep’s milk cheeses. There’s good variety here, spanning a wide range of personalities and flavor profiles. And, of course, you can’t forget the amazing cheese I just discussed a few weeks ago, Brebirousse d’Argental: a perfectly creamy exercise in sheep’s milk indulgence.

Abbaye de Belloc
A full-flavored example of sheep’s milk finery, Abbaye de Belloc is produced in the Pays Basque region of Northern Basque Country. This cheese doesn’t pussy-foot around; its forthright sheepy flavor carries with it a distinctly barnyardy funk along with a salty-sweetness that makes it difficult to put this cheese down. Superbly meaty and with 60% fat content, you can taste every luscious ounce of oil as it slathers its way across your tongue (more trained palates may even detect a hint of lanolin). When aged correctly, Abbaye de Belloc relaxes a bit and shares an addicting caramelized flavor with those patient enough to wait a few weeks before indulging. Produced in the temperate climates of Northern California, San Andreas is a great sheep’s milk cheese for beginner and advanced cheese lovers alike. With a robust flavor and firm, smooth mouth feel, this cheese is complex but doesn’t like to play coy. I love its lactic maturity—very nice for a cheese aged just 60-days—and it’s saltiness is punctuated with handsome sour notes, right where they need to be. This may be a relatively young cheese, but you can taste every week it spent in the aging room, and you may even be able to sense the grass, grain, and alfalfa that Bellwether’s well-tended ewes dined on during the milking season.

P’tit Basque
One of my favorite cheeses of all time, P’tit Basque is another Basque cheese produced in the Pyrénées. Mild and nutty, firm and slightly fruity, this cheese isn’t overly complex, making it an ideal candidate for introducing beginners to the world of sheep’s milk. Aged for about 70 days, P’tit Basque maintains a sweet smoothness reserved for younger cheeses, and melts well when swirled into a béchamel sauce or sprinkled across the top of a creamy gratin. Even though it is produced by a large French producer, P’tit Basque still maintains a certain level of artistry that keeps it on many learned cheesemongers top-ten lists.

What are your favorite sheep’s milk cheeses? What makes them stand out for you?

Previous Post: « Sour Cream Coffee Cake Recipe with Lemon and Vanilla
Next Post: How to Roast A Turkey In the Oven — How long and how to prepare it »