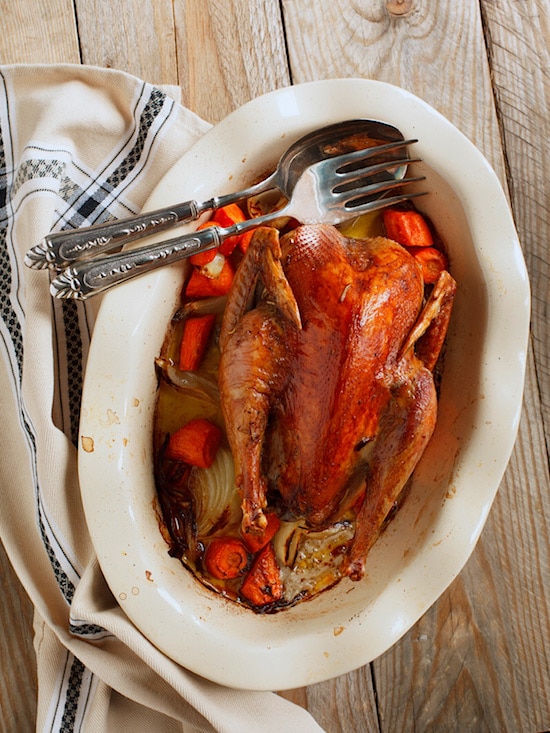 – The most moist, flavorful roast pheasant recipe ever! –

Like most households, Thanksgiving is Turkey Time with my family. A few years ago, I spent the holiday with some good friends, and given that they weren’t beholden to ye olde traditional turkey, I got to test my mettle and learn a new skill: how to cook a pheasant. Not only did I decide to roast my very first pheasants, but the birds in question were two I hunted myself. (!!!)

A few weeks before that T-Day, with a very clear vision of roast pheasant in my mind, I met up with the California Waterfowl Association and participated in an organized women’s pheasant hunt. The weekend included one day of classroom training and testing on firearm safety, where we learned what not to do with a gun (for example, did you know that a disproportionately high number of hunting accidents occur when armed individuals fall out of a tree?). Then we spent the following day in the field actually shooting things.

Each pair of women were assigned a guide with a dog. Our guide, Chris, was a great guy, and as far as I could tell, his top priority was continually letting us know that our shotguns were, at pretty much every given moment we were out there, pointed at a human being off in the distance. (I guess that’s the downside of hunting with a large group.) We had a handful of chances to hit a moving target, but most of them went like this:

Inevitably the dog came back unscathed, which is a miracle considering it’s primary occupation is running around the field at ground zero with your target. Sadly, the dog also continually came back sans pheasant. Finally, after countless spent rounds and three hours wandering through the brush with a gun that seemed to mysteriously double in weight every 15-minutes, Chris called out another bird in sight. Right in front of me.

Chris: “You’re about to step on a pheasant.”

Now, I’m not a fan of kicking birds. Or any live animal. So when I was told to kick the bird, I paused for what the hunters I know would call more than a reasonable amount of time. Thankfully, it bought enough time for the pheasant to get its bearings and flutter away in a doomed attempt at escape. I lifted my gun and — after making sure there were no humans in the distance (geez, so much to keep track of!) — fired. I clipped the pheasant and the dog loped after it, then brought it back. Chris put it out of its misery and to rest in a pocket at the back of his hunting vest.

Thus far, I was not terribly satisfied with the hunting experience. It turned out we were hunting in a bird club, which we weren’t aware of before arriving, where the animals are released the day of the hunt. Perhaps I’m naive, but I imagined we’d be out in an open field where the pheasants had been on their own dime their entire lives. Also, I was vegan for four years so I instinctively have my eye trained on causing as little pain to animals as possible. (Peanut gallery: no comments on the morality of hunting, you hear?) So kicking and winging pheasants were not part of the plan I had envisioned when I set out to give this a try. But I was there and I wanted to be a good sport, so I kept at it and enjoyed the experience.

A little while later, we decide to call it a day. We were hot, tired, and dubiously considering the hunting process as a whole. On the way back in, a bird fluttered up five feet in front of me and, compelled by a weird, reflexive passion that came out of nowhere, I raised my gun and fired.

The dog ran up with the bird, after doing its own little victory lap around the periphery. Upon its return, we notice something. The pheasant had no head.

Chris: “You shot its face clean off!”

Chris: “No, that’s a good thing. It means it died right away.”

Afterwards, as all of us ladies sat around munching on barbecue and talking about how the day went, the organizers of the weekend started handing out prizes, little hunting trinkets for Most Improved, Most Birds Shot, that sort of thing. Holly Heyser, a beloved friend and one of the administrators of the organization, looked straight at me and announced, “This year we have a new prize. This one goes to Stephanie, for the Shot It In the Face Award.”

The two birds mentioned above sat in my fridge for a while, plucked and ready to go, but I had a hard time confronting them. I still have yet to make peace with the act of hunting, even though I very much support it as a fair way to eat. As one that’s visited factory farms and seen firsthand the state the majority of our meat animals live in before they’re sent to slaughter, I adore the idea of an animal that’s lived a free life until the day the axe falls; but I’m still figuring out how that fits into my life, specifically. Also, the event I attended was held at a club, which I wasn’t aware of beforehand, and I’m not too stoked about the idea of releasing captive birds just to be chased and summarily, um, harvested.

When I had finally processed the weekend, I had to decide what to do with the birds. The roast pheasant vision has waned slightly out of waffling guilt, but Thanksgiving was looming and I was in charge of the protein portion of the evening. So, pheasant it would be, though I had to set out learning exactly how to cook pheasant, which is generally a pretty lean bird and prone to drying out. A call to Hank Shaw pointed me to a few pointers — cook it low and slow, above all — and I found the recipe below in an old Napa Valley vineyard cookbook that was gifted to me by my boyfriend’s mother. I edited a few things for the sake of availability and modern tastes, and came up with the recipe below.

Using bacon to cover the breast of a roasting pheasant is an old trick I picked up while digging around in countless pheasant recipes. It keeps the breast from cooking too quickly and also adds a nice layer of fat that moisturizes from the outside. And being an enthusiastic pyro (ex-fire dancer here, thanks) the idea of dousing something with a flammable liquid and setting it ablaze totally flips my switch.

This dish takes a while to prepare, so make sure you read the recipe all the way through: It requires four hours of brining, and at least another two hours of drying time. I recommend brining the bird early in the morning on the day you want to cook it, then letting it rest for a good four hours in the fridge to dry the skin thoroughly. Feel free to use a high-alcohol brandy instead of bourbon, if you like. I used Makers Mark to great effect. Be careful when you light the bird on fire, as the flames will jump quite a bit, depending on how much liquor you used; the smell of burning facial hair will not improve the taste of the bird. 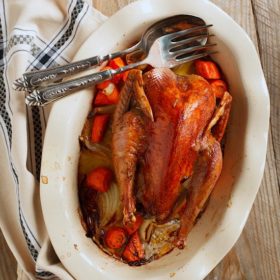 How to Cook Pheasant: Buttered Roast Pheasant with Cream and Bourbon

This is a long, slow recipe for roast pheasant, cooked in butter and cream, with a splash of bourbon for good measure. Please read the entire thing so you understand how long it will take to complete the dish. If you want to learn how to cook a pheasant, this is your go-to dish.
0 from 0 votes
Print Pin
Course: Entree
Cuisine: American
Prep Time: 7 hours
Cook Time: 1 hour
Total Time: 8 hours
Servings: 4
Calories: 676kcal
Author: Stephanie Stiavetti

Nutritional information does not include brining ingredients.