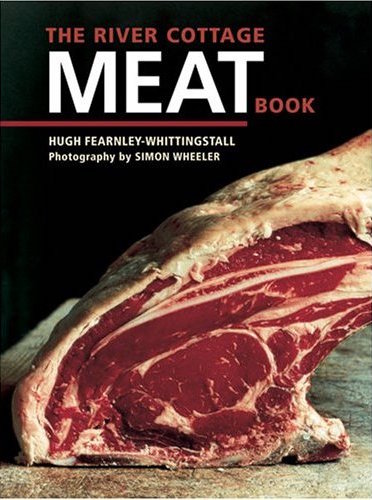 While I’ve been trying to not indulge my little cookbook problem, I recently picked up The River Cottage Meat Book by Hugh Fearnley-Whittingstall. I’d seen the book around, but not being a big meat eater, I was always a little put off by the cover. Recently, though, my in-laws butchered an extra cow that was taking up space on the farm, so I’ve now got 300 pounds of organic, free range beef in my possession. I don’t know a chuck from a round from my ass, so I thought I should probably read up on the finer points of bovine butchery before dolling out the half carcass that’s taken up residence in my freezer. So of course, I turned to the River Cottage for more information.

One thing I have to say about Hugh – he certainly talks a good game. The man runs the gamut of meat-related knowledge, and addresses the subject in moral, culinary, and academic terms throughout the entire River Cottage series. The first thirty or so pages of The River Cottage Meat Book discuss the morality of eating meat, and how he came to his own ethical conclusions on the topic. While I’m not one to yeigh or neigh anyone else’s moral character, I have to say that Hugh’s certainly given this a lot of though, and his argument is one I’d not really heard before.

The information provided in this River Cottage book is extensive. While I was looking for butchering information, that’s really only a tiny portion of what’s here. This isn’t a journey – rather, Hugh takes you on an entire meat pilgrimage, covering exhaustively a series of topics from animal husbandry to proper storing and cooking. He discusses exactly what good meat is: how to find it, recognize it, appreciate it, and honor it. His philosophy that preparing a weak meat dish is completely disrespectful to the animal that gave its life for your dinner is spot on, and the recipes he includes will most definitely raise any flesh you’re cooking to a level of near enlightenment.

After doing a bit of research, I ended up perusing the River Cottage website and found not only an awesome forum that addresses all levels of farming, but also a series of internet e-classes that will train you on anything from mushroom hunting to big game preparation. River Cottage e-classes aren’t cheap (£20.00) and honestly, taking an online mushroom identification class seems a little – um, unnerving? – but I really like the idea of online cooking lessons. While I wouldn’t necessarily pay for instruction that I can find on Youtube for free, Hugh’s got to pay for that cute little river cottage somehow, right? ;)

I hit up the local bookstore to check out Hugh’s other River Cottage cookbooks, and I’d like to buy a few of them if the economy ever picks up and decides to grace my bank account with a paycheck again. I’ve recently developed this strange and wonderful urge to make jam, so I put in an order for the River Cottage Preserves Handbook. I’m still trying to find a way to make jam without the use of refined sugar, so if you’ve got a suggestion, I’m all ears.

The River Cottage seems to be quite prolific in the video arena as well, boasting several TV shows and a plethora of instructional DVDs. I’ve been watching what appears to be his original show, Escape to River Cottage, and Hugh’s nearly got me on the next flight to Dorset. I’ve been feeling the itch to jump ship from this urban setting for a while now, and it’s taking everything I’ve got to keep from packing it all up and starting my own escape from city life.

The final word: I’m intrigued. Had I the money, I would start up my own River Cottage in a heartbeat. But until then I’m left to live vicariously though our friend Mr. Fearnley-Whittingstall, and for that I’m thankful.