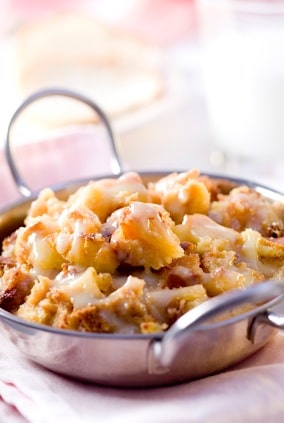 World, I’d like to introduce you to my dear friend, my favorite croissant bread pudding recipe. But first, a few words on life.

Last Sunday, I had a birthday. I won’t share how many years I’ve seen float by from my seat on the river bank of time, but I will tell you this: I had the stark realization that my life has changed an awful lot over the past seven months, more than it’s changed in any short period prior. Nearly everything I knew a year ago is completely different now. Living situation, marital status, career track, you name it. Basically, life as I knew it for the preceding six years has completely failed to exist.

That’s not to say I’ve had a bad time of it – quite the contrary, actually. In truth, all of these changes are based on decisions that I made consciously, with my eyes and heart wide open. I knew where I wanted to be in life, and in order to get there, I had to do some serious rearranging of the core elements that made up my day-to-day existence. Sure it hurt, and at times I thought the pain was going to do me in. But when has change ever been easy?

I’m going to risk becoming a cliche and quote one of my favorite poets and authors, Rainier Maria Rilke. Letters to a Young Poet, a collection of letters he wrote to then 19-year old Franz Kappus, was a welcome flashlight during some of my darkest periods:

“Why do you want to shut out of your life any uneasiness, any misery, any depression, since after all you don’t know what work these conditions are doing inside you? Why do you want to persecute yourself with the question of where all this is coming from and where it is going? Since you know, after all, that you are in the midst of transitions and you wished for nothing so much as to change. If there is anything unhealthy in your reactions, just bear in mind that sickness is the means by which an organism frees itself from what is alien; so one must simply help it to be sick, to have its whole sickness and to break out with it, since that is the way it gets better.”

Over the past few years, I’ve learned to do more than accept change – I’ve learned to embrace it. To celebrate it. To understand that even though times may be tough, I have to live in the moment and breathe through every one of those difficult seconds, thankful just to be alive. Because the alternative? Yeah… no thanks.

I’ve dealt with my fair share of adversity, but I’d also count myself lucky in a lot of ways. I am the recipient of countless blessings, in the form of both privelege and the people who care about me. I’ve managed to reclaim my health, sustain my optimism, and maintain my sanity (though some would argue the latter). I’ve traveled all over the world, seen things people only dream of, and I know that in the not-so-distant future, I’ll get to have even more heart-pounding experiences to top the ones I’ve already had.

Most importantly, I know at any given moment that I can and do love, and am very much loved in return. It took me many years of beating my head into a wall of self-loathing to figure out that love is all around me. All I had to do is open myself to it, to trust that it exists. I’d count this as one of the most important lessons of my entire life.

What does this have to do with croissant bread pudding? Let me explain. One of the most important tenets of my life is carpe diem, or “seize the day.” Life is short and the little time I have here on my slice of existence is bumpy. Who knows what will befall me when I walk out the door tomorrow, so I need to make the most of every minute, right? I think Erma Bombeck said it best:

“Seize the moment. Think of all those women on the Titanic who waved off the dessert cart.”

So for all of you out there who think that combining butter croissants and heavy cream is coronary sacrilege, I’d like to inform you that your heart has two sides. Sure, your cardiologist doesn’t want you packing on the fat grams, and she’s right. But, let me tell you that there are some things in life that are just worth taking a bite of – croissant bread pudding being one of them. One little plate of this pudding will cause you to curl your toes in ecstasy, tossing back your head in a heatwave of sheer, sweet pleasure, touching a place in your heart that no low-fat, olestra-laden dessert can come close to. No, you shouldn’t eat the whole pan, but if you were to get hit by a bus tonight, wouldn’t it be incredibly satisfying to count this as the final dish that graced your taste buds? 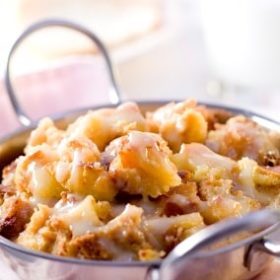 I love croissants. I love bread pudding. When I had idea of putting the two together, it seemed like a work of sheer genius on my part. But after a little research, it turned out that I wasn’t the only one who had thought to combine these two concepts. Oh well, I guess I’m not a genius after all.
0 from 0 votes
Print Pin
Course: Dessert
Cuisine: French
Prep Time: 20 minutes
Cook Time: 1 hour
Total Time: 1 hour 20 minutes
Servings: 8 servings
Calories: 625kcal
Author: Stephanie Stiavetti

Nutritional analysis does not include dessert sauce.

*For gluten-free croissants, here are two recipes to try: