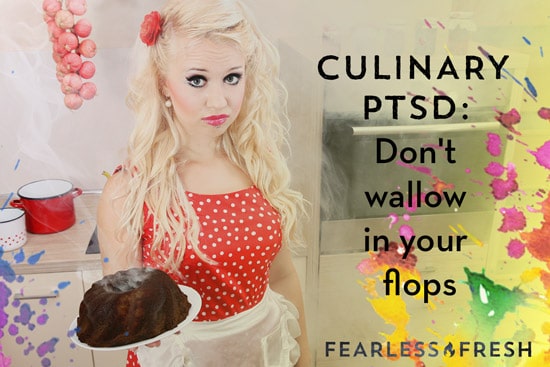 A few years ago, a friend who was learning to cook decided to make me rainbow cupcakes for my birthday. At the time I was battling some health issues and had removed gluten from my diet to see if that made a difference in my overall sad-sack-sick-girl status (because honestly, that’s how I felt at the time). She threw together some gluten-free cupcakes, popped them in the oven, arrived at my house, and presented me with… some of the sorriest cupcakes I’ve ever seen.

I’ve seen some baking flops, but I’d never seen anything quite like this. The cupcakes had collapsed into bright, colorful little craters, not unlike those you see on the moon, and when bitten, they had the texture of fresh asphalt. I had never seen her to stressed out, and I’m way familiar with cooking stress.

She was near tears and wanted to know what happened. I wasn’t there when she made them, so I had to do some digging to find out what went wrong. The conversation went something like this:

Her: “I’m so embarrassed! I’ve made cupcakes a hundred times and they always work out great! All I wanted was to bring dessert for after dinner tonight, but now I feel awful.”

Me: “Aw, it’s all good. Don’t worry about it. How much baking powder did you use in the recipe?”

Her: “Whatever the recipe called for. One and a half teaspoons, I think?”

Me: “Ok, that’s a reasonable amount. Did you alter the recipe in any way?”

Her: “I just added food coloring.”

Me: “Which gluten-free flour blend did you use?”

Me: “Oh. What kind of flour did the recipe call for?”

Her: “Regular flour. I just used rice flour instead.”

What my friend didn’t know was that baking – especially gluten-free baking – is a delicate science, one that can’t be changed up without a little forethought. She was just figuring out how to cook, muddling her way through. By swapping out one of the primary components of the recipe, she had drastically altered the chemistry involved with the cupcakes and the experiment had blown up in her face, so to speak. And she was super upset about her cooking failure..

What had happened here was my friend had taken a recipe that called for regular flour (which contains the sticky protein gluten) and swapped it for straight rice flour (which contains no gluten). I’ll avoid a baking science lesson here, but long story short: since the batter had no stretch, when the baking powder did its job, there was nothing that allowed the cupcakes to hold onto the gas when they rose in the oven. So they collapsed in on themselves like a dying star.

No harm, no foul. Someone ran out and bought a cake for my birthday, and it was awesome. My friend, though, was feeling pretty butt-hurt and down on her baking skills.

A few weeks later, I called her to see how she was doing. She brought up the cupcakes again, feeling like they were an elephant in the room, and apologized a few more times. Then she made a comment: “It might be a while before I bake for anyone else again.”

I told her I was still figuring out what to cook for dinner and invited her over that night, then sneak-attacked her with a baking project – a simple gluten-free banana bread. She fidgeted at the thought of a crater cupcake repeat performance but graciously humored my attempt to get her back on the horse.

The banana bread turned out great and she felt a lot better about her baking skills. Later that week she made a gorgeous birthday cake for her mom.

Cooking trauma is a real thing, especially when you’re just learning to cook. Even though cooking failures and inedible home cooked meals are not the end of the world, they can have very real consequences on our self esteem, especially when they happen in front of other people. (Can you say dinner party cold sweats?) The ante can be even higher if you’re known to be a good cook, and that knock to the ego can ground a home cook for weeks, months, or in some cases, years.

Part of what I do is coach people through cooking failures, and show them that one failure – or even a string of them – doesn’t make you a bad cook. It means you’re growing and trying new things, and that’s one of the most important things you can do when cooking.

There’s the old cliche that the road to success is paved with failures, but that’s doubly true here. The lessons you learn the hard way and often the ones you remember forever.

Case in point: Last week I tried to make a chocolate mousse at a friend’s house, and I didn’t have the regular ingredients I would use for my favorite recipe. So I improvised and used what we had on hand. I’ve made mousse a thousand times, so why would it not work, right?

As we sat there whipping this would-be mousse that just refused to come together, I felt that pit in my stomach – the same feeling I’d get when I was learning to cook and I suddenly knew it wasn’t going to work. And then came the thoughts:

“How could I, trained at one of the best pastry schools in the country, a person who teaches people how to cook, mess up something so simple as chocolate mousse? What the hell is wrong with me? I might as well hang up my apron and call it a day. F— this.”

I felt like a total idiot. I got butt-hurt for a little while, then realized I was being a big baby and made the conscious decision to let it go. We all make mistakes, right? I was shooting from the hip for this dish, and I missed. No harm, no foul.

It’s just dessert, for frack’s sake. No one’s going to die over it.

I’m here to tell you that cooking failures happen to everyone. They happen to professional chefs, cooking teachers, culinary school graduates, cookbook authors, and especially to folks who are learning to cook. They will happen to you, too. There’s no way around it.

The only thing you can do after falling on your butt is to pick yourself up, dust off your backside, and keep walking.

Now it’s your turn. Reply and let me know about your biggest or most recent cooking failure. What were you trying to accomplish? What did you learn in the end? Did it rattle you badly, or did you move past it and keep on cooking? Please let me know!

To-do this week:
Take a second to think back over your culinary failures, from now to all the way back to when you were learning to cook. Have you messed something up so badly that it threw you for a loop and totally threatened your self esteem in the kitchen? Hop over and share it on the Fearless Fresh Kitchen Ninja group on Facebook. Sharing is important because it lets others know they’re not alone. The group is also a great place to ask cooking questions – and getting information is the #1 way to avoid kitchen fails!

Previous Post: « The Fearless Fresh Ninja Community: Your Key to the Kitchen
Next Post: How to Cook Vegetables: 8 Easy Tricks to Make Any Veggie Delicious »