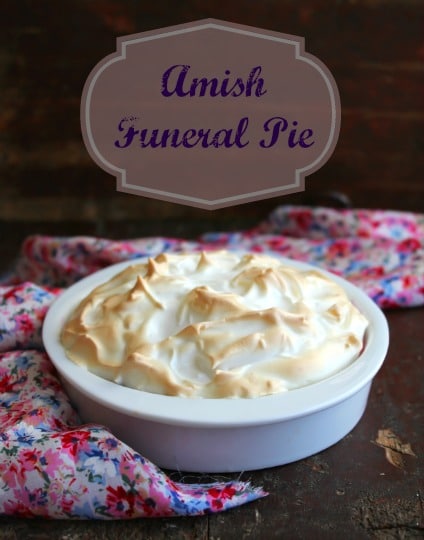 Today I’ve got a quirky little guest post from friend and colleague Lisa Rogak. She recently released a fascinating ebook called Death Warmed Over, which was originally published in paperback in 2004 but became a hard-to-find cult classic after it went out of print. Lisa recently re-released it as an ebook which was subsequently and enthusiastically reviewed by Food News Journal, Chicago Public Radio, Neatorama, and other national media. You’ll find more details about the book at the bottom of the post. Until then, enjoy this classic Amish Funeral Pie!

An elderly man was at home, dying in bed. He smelled the aroma of his favorite chocolate chip cookies baking. He wanted one last cookie before he died.

He fell out of bed, crawled to the landing, rolled down the stairs, and dragged 1himself into the kitchen where his wife was busy baking cookies. With his strength waning, he made it to the table and was just barely able to lift his withered arm to the cookie sheet.

As he grasped a warm, moist, chocolate chip cookie, his favorite kind, his wife suddenly whacked his hand with a spatula.

“They’re for the funeral.”

Many cultures would politely disagree. For some, not only are there different degrees of dead, but they also like to keep the bodies around until they concur that the person is 100% dead, or at least 100% able to proceed to the next world, wherever that may happen to be. Of course, in the interim, the almost-dead still have to eat, so people in these cultures continue to serve food to their undead relatives, usually foods that were favorites of the person when they were 100% alive. Sometimes the type and amount of food served to the formerly-vibrant family member depends on how dead (or almost-dead) he or she happens to be.

It’s possible that the practice of feasting after a funeral originated with early people who were determined to send their dead off with some nourishment for the journey. And whatever was left over, well, at least the living could eat it. Some cultures took this to extremes by placing a tube in the mouth of a corpse before burial, and snaking it out of the casket and up through six feet of compacted dirt. This was to ensure that the deceased would continue to receive nourishment during the long journey into the afterlife, or at long as somebody remembered to put food in the tube.

But a long journey for mourners attending a funeral may have also been responsible for the development of some death food customs. After all, it would take a number of days for word to travel about a deceased relative living in a distant village, and then an equal number of days to travel to view the body and visit with the mourners. If the grieving family expected others to come, they had to be prepared to feed them.

For most cultures today, sharing a meal after the funeral has become pretty standard; indeed, it’s considered rude to refuse. In any case, there’s no better way to prove you’re alive, as compared with the body in the box you’ve just said farewell to, than by eating. Actually, most people would include sex in their response, and indeed, food combined with carnal hunger can sometimes provide a double dose of post-funeral vitality, not to mention a jump in the birth rate exactly nine months later.

However, as funerals become more of a do-it-yourself proposition – not the embalming, mind you – with more people taking charge of planning their own funeral services with a mind towards turning it into a party instead of a sobfest, thanks in part to the popularity of the TV show Six Feet Under, learning about the funeral practices of other cultures can only help us put the fun into funeral.

Some people may believe it’s distasteful to spend time thinking about how death and food are so interconnected. Both are an essential part of life after all, but I’d like to think that many more are intrigued by discovering the differences, as well as the similarities. And my book Death Warmed Over: Funeral Food, Rituals, and Customs from Around the World, which I’ve recently reissued as an e-book after being out of print for years, is full of both differences and similarities.

Here’s a recipe for a traditional Amish funeral pie, along with some background.

In keeping with the simple tenets of their faith and lifestyle, Amish communities follow a similar path when a death hits their community. They, and their spiritually-close kin, the Mennonites, are perhaps the only people in the United States who use a coffin – a hand-built six-sided simple wood box – instead of the four-sided caskets.

Since Amish extended families can run into hundreds of people, funerals are often held in the barn of the deceased. The service is generally held in the barn to accommodate the crowd, then mourners eat a traditional funeral feast that is prepared by the female relatives and neighbors. In summertime, tables will be set outside for up to 500 or more people, which means an immense amount of food must be prepared. The funeral table is also simple, mostly to streamline the cooking chores for the women. Hot or cold sliced meats, cheese, vegetables, and breads are laid out on the tables. But even the local women can’t prepare all the food; with families that large, funerals can be frequent, leaving little time for chores of a normal workday.

Therefore, mourners who have to travel a great distance to the funeral also contribute food to the dinner, which is how Raisin Pie, or Amish Funeral Pie, became a traditional dessert at Amish funerals, since it travels well.

Only after everyone has finished eating, and the women who have spent the day preparing and serving the meal have paid their respects to the deceased, does the funeral continue with a trip to the cemetery. 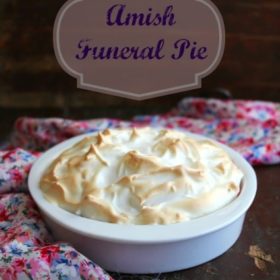 At Amish funerals, hot or cold sliced meats, cheese, vegetables, and breads are laid out on the tables. But even the local women can’t prepare all the food; with families that large, funerals can be frequent, leaving little time for chores of a normal workday. Therefore, even mourners who have to travel a great distance to the funeral also contribute food to the dinner, which is how Raisin Pie – a/k/a Funeral Pie – became a traditional dessert at Amish funerals, since it travels well.
Only after everyone has finished eating – and the women who have spent the day preparing and serving the meal have paid their respects to the deceased – does the funeral continue with a trip to the cemetery.
0 from 0 votes
Print Pin
Course: Dessert
Cuisine: Amish
Prep Time: 15 minutes
Cook Time: 25 minutes
Total Time: 40 minutes
Servings: 10
Calories: 259kcal
Author: Lisa Rogak

Nutritional analysis does not include pie crust of your choice.

More about the book: One part sociological study and one part cookbook, Death Warmed Over explains the background and proper timing for such culinary rituals as passing a hen and a loaf of bread over a grave as dirt is shoveled onto the coffin, serving chocolate caskets and skull-shaped cakes at a funeral, and baking up a Funeral Pie to acknowledge the passing of a loved one.

Whether you’ve been asked to provide food for a funeral feast or wish to bring an appropriate culinary contribution for the extended mourning period, look no further than Death Warmed Over. A unique cookbook that shows you how to incorporate long-standing ethnic and cultural traditions — from the Amish and Eskimo to Greek and Polish — into the planning of a well-rounded celebration of life. The book features suggestions for ways to incorporate recipes and traditions into non-funeral parties or gatherings.

Lisa Rogak is the author of over 40 books, including One Big Happy Family: Heartwarming Stories of Animals Caring for One Another and the forthcoming Hillary Clinton In Her Own Words. She lives in New Hampshire.