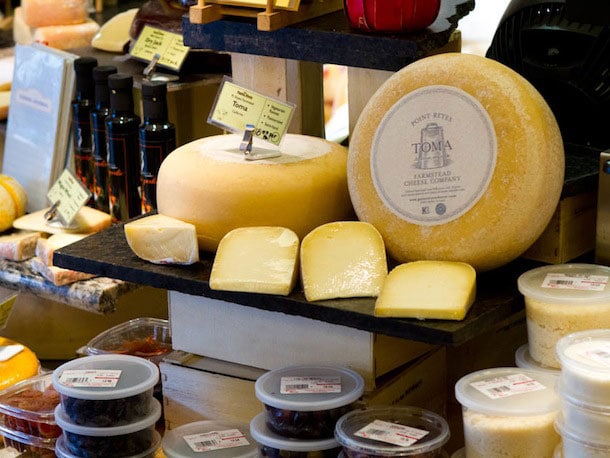 Cheese is a pretty simple food. It’s easy to store cheese, it’s easy to eat cheese, and it’s even easy to make cheese. (Seriously!) But when it comes to categorizing the stuff, it can get confusing.

There are any number of adjectives that can be used to describe cheese, and those words are plastered across the gleaming packages before you at the cheese counter. You’ll hear terms like washed rind, creamline, and curd, and you might hear about a cheese’s bloomy rind or its penicillium mold. But before we go into all of the particulars of what makes up a cheese’s personality – which I’ll teach you in a later post – we have to cover one very important topic: a cheese’s method of production.

While there are many ways to classify cheeses, it’s important to properly categorize different varieties by how they are produced. Cheeses generally fall into one of four production categories: mass-produced, specialty, artisan, and farmstead. How is a beginning cheese lover supposed to tell the difference between a mass-produced cheese and a farmstead cheese?

For a solid definition of these categories, let’s turn the the experts. When it comes to any cheese-related questions, you can always count on The American Cheese Society to know the answer.

Now that you’ve been informed, how does this all come into play when buying and enjoying cheese? Looking at a cheese, you may not be able to tell how large the production was that created it; artisan varieties can have very sophisticated labels, and mass-produced cheeses can easily employ terms that lead consumers to believe the cheese was made on a small scale. What can you do to find out the truth about how a cheese was made?

Here’s where cheese becomes a social activity: in order to learn more about cheese, start talking more to your local cheese purveyor. If you have a cheese counter in your area, get to know your cheesemonger behind the counter. Reputable cheese counters have a great relationship with the distributors who provide their products, and as such, they are very knowledgeable about the varieties they carry.

I cannot stress this enough: get to know your cheesemonger, and you will be well taken care of.

Unfortunately, some areas are not blessed with a local cheese counter. If you live in one of these cheese-less areas, don’t despair. Specialty cheese shops are popping up all over as the artisan cheese movement takes hold in American culture. You can also order your cheeses from a respected online shop, such as Murray’s or Artisanal. Reputable online cheese shops will also answer your questions if you want to give them a call or shoot them an email.

Here are some examples of cheeses in each of the above categories.

SOME EXAMPLES OF… MASS-PRODUCED CHEESES