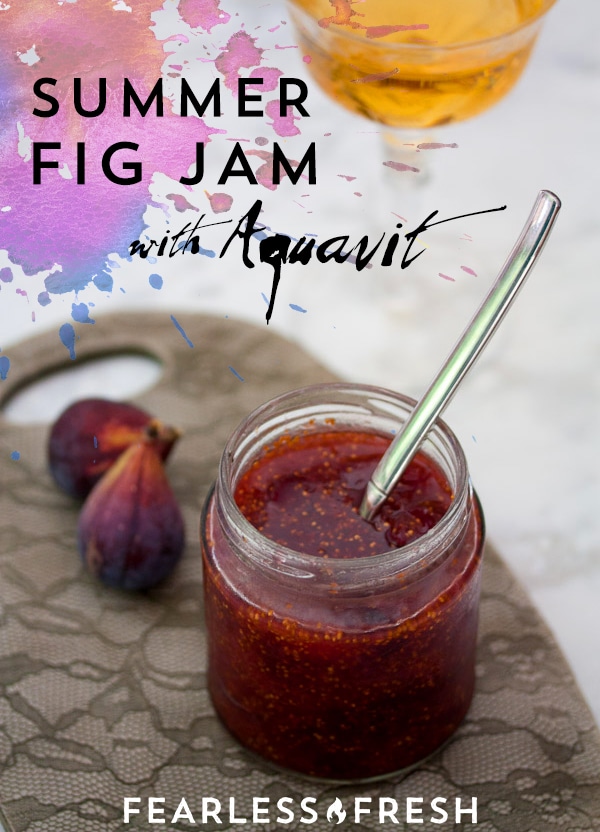 This fascinating fig jam is compliments of my food writing friend/brother/husband/colleague Garrett McCord. Garrett formerly wrote the blog Vanilla Garlic, but he’s moved on to create an entirely new website about cocktails, Coupe de Gras. If you’re at all inclined towards intelligent cocktails or witty banter (or both) I highly recommend you check it out.

I’m all for boozy jams — hence this peach Bellini jam with champagne, or my other favorite, Mandarin marmalade with lemon verbena and Campari — but I’ve never made jam with aquavit. Leave it to Garrett to push the boundaries of what we think jam should conform to, creating something entirely different and worthy of your attention. Truly, that’s what he does best.

Jam is a creation that’s both simple and trying. I don’t say this to put you off attempting it, rather, it’s simply a statement of fact.

Fig jam only requires chopping, stirring, and boiling. Really. That’s it. It’s just that there is a lot of it. Lots of chopping. Lots of standing still and stirring for what can be up to an hour. Lots of slow bubbling and cooking – both the jam itself and the water bath – that turns your kitchen into a veritable sauna. (An environment even more tedious when suffered in the throes of a triple digit heat wave.)

All of this is even more true during summer; the season that brings about some of the most ideal produce for canning. Fresh berries, peaches that weep with juice at the merest touch, and tomatoes of every kind. The potential is nearly endless.

One of my favorite jam recipes is for fig jam. While figs aren’t my favorite fruit, when jammed they make for an excellent partner for cheese plates, sandwiches, grilled meats, vanilla ice cream, addition to fruit pies and so on. Plus, fig jam is a fantastic starter jam if you’re new to canning. It gels easily, has plenty of inherent sweetness, and the number of supporting flavors it marries well with allows the resulting jam to be easily customized to the maker’s taste.

My neighbor has a fig tree so large that the canopy is the size of a house and reaches three stories tall. The shade it casts covers at least 2,000 square feet. Similarly, it also drops about 2,000 square feet of figs every summer turning the street into a sticky and rather fermented mess. The neighborhood attempts to mediate this by picking the tree with eager abandon.

(Not that it does much good. Come August, that corner smells like rotting fruit and bad brandy, with often an inebriated raccoon or four stumbling about as if waiting for the Uber they ordered to take them home.)

This is the roundabout way to say that each summer I have access to plenty of figs to make fig jam from and each year it’s a little bit different. One year I flavored my fig jam with orange juice and zest, another year with cinnamon sticks, and yet another with a generous pour of balsamic vinegar. This year’s fig jam was spiked with aquavit; a Scandinavian spirit flavored with caraway and star anise. The savory whisper complimented the inherent flowery flavors of the figs, resulting in what may be my favorite fig jam yet.

This recipe consists of the basic instructions for making fig jam. You can process the jars in a water bath for 15 minutes, or not. Doing so will ensure you can put the jars up for at least 18 months. Otherwise, the jam should be stored in the fridge and consumed within a few weeks.

The recipe also calls for aquavit for flavoring, but this can be swapped out for another favorite booze. If you prefer your jam sans-liquor, kick it out altogether and add a cinnamon stick, cardamom pods, or another favorite warming spice — like this recipe for fig jam with pear and cinnamon. Fig jam is forgiving, so no stress on adding whatever you think might taste good. 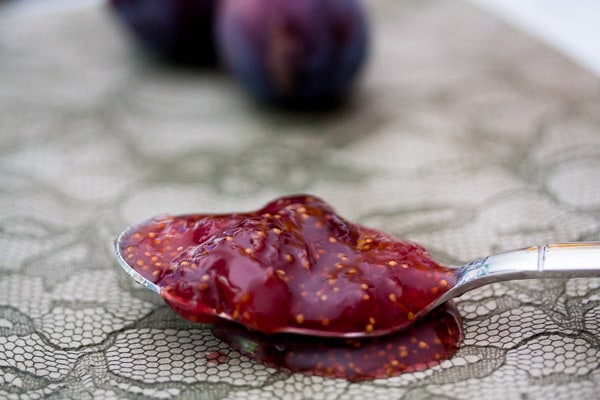 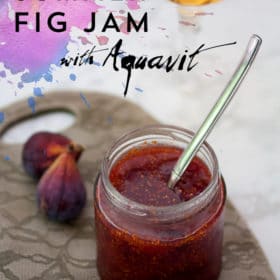 Jars can be sterilized by being run through a dishwasher, being boiled in water for 10 minutes, or heated in an oven set at 200°F (93°C) for 10 minutes. Sterilized jars help ensure your jam doesn’t go funky. This content was originally posted on FearlessFresh.com.

Hey there, I'm Garrett McCord. I love a good cocktail so I created Coupe de Grâce, a blog where I explore the craft cocktail world, something I became truly fascinated with when I wrote my second cookbook, Stewards of Spirits: A Collection of Sacramento Cocktails and the People Who Make Them. In addition to blogging, my work includes freelance writing, recipe development, and copyediting for numerous food, wine, and spirit companies. My first book, Melt: The Art of Macaroni and Cheese was written in collaboration with Stephanie Stiavetti. I have been featured in the New York Times, The Smithsonian, Epicurious, The Sacramento Bee, Gourmet Online, and many other nifty places. I love writing and you can read more about my services at GarrettMcCord.com