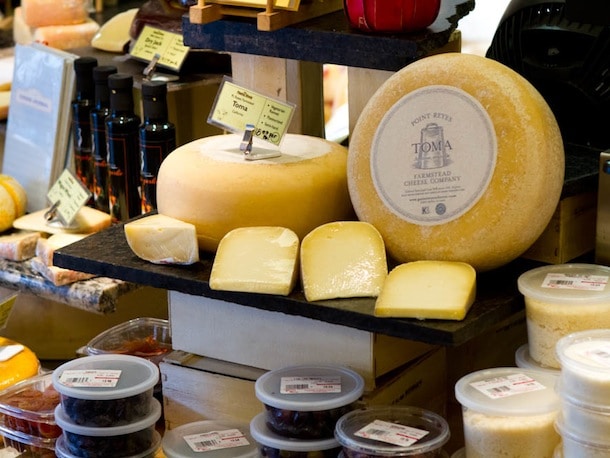 Unless you’re living under a rock where no cheese exists, you’re probably aware that the West Coast is home to many inspired varieties of artisan cheeses. We’ve got coastal breezes, temperate weather, and rich grasses that quite literally spread for days in all directions. Can you think of a better breeding ground for happy farm animals? And of course fat, content ruminants make for stellar milk. Which makes for one killer cheese plate.

Given the number of small-time cheesemakers in Washington, Oregon, and California, these Pacific states churn out an incredible variety of artisan cheeses. Which are the the most reliable favorites? That’s really hard to say, but we’ve all got our favorites–and I’m here to present you with five of my tried-and-true dairy BFFs.

I present you with a cheese plate of five West Coast cheeses you simply MUST try. I guarantee you won’t be disappointed!

Point Reyes Toma
California, Cow’s milk
An award winner may times over, the lovely Toma is a cheese that sits at the top of many cheese connoisseurs’ top-10 lists. Toma is produced along the central California coast, by a small family operation called The Point Reyes Farmstead Cheese Company. This beauty of an Italian-style cow’s milk cheese is semi-hard, with a gorgeously creamy, buttery personality. Toma is a wonderful addition to your cheese plate, but it’s just as readily at home shredded into a baked casserole. (Gratin dauphinois, anyone?)

Mt. Townsend Cirrus
Washington, Cow’s milk
A soft cow’s milk cheese from Mount Townsend Creamery in Washington State, Cirrus is a stellar West Coast version of French Camembert. While this buttery cheese is just begging to be baked and paired with dried fruit, it’s definitely not your mom’s old-fashioned dipping cheese. You’ll find this unique variety creamier than the French version, with a few licks of Pacific-Northwest sea breeze as an added bonus.

Rogue River Blue
Oregon, Cow’s milk
Rogue River Blue is, hands down, one of my favorite blue cheeses. Produced in central Oregon by Rogue Creamery, you’ll find a very assertive personality here, in addition to its unique wrapping of pear- and brandy-soaked grape leaves. Its contrasting textures of creamy and crunchy play across your tongue, releasing the most incredible series of flavors I’ve experienced in a blue cheese: spicy, vegetal, nutty, and, well… wild. If you’re a fan of the blue and want to up the ante, I highly recommend Rogue River Blue.

Tumalo Farms Classico
Oregon, Goat’s milk
Tumalo Farms’ Classico is a semi-hard goat’s milk cheese that pulled a 3rd-place prize in the prestigious U.S Cheese Championship Contest in 2009, despite the fact that the cheesemaker was a relative newbie to the cheese world. This central Oregon hometown hero is goaty without being overly so, with a lingering sweetness that leaves your palate begging for another bite. Perfect on a cheese plate, or in Tumalo Farms’ recipe for roasted chicken penne with arugula pesto.

Nicasio Valley Foggy Morning
California, Cow’s milk
There are not many cheeses I can say I want to fall asleep in a bed of, but Nicasio Valley Cheese Company’s Foggy Morning is such a soft, delicate, young cheese that you might have a hard time not dreaming of a nap in this fresh little pillow of pure dairy love. In its tart fluff you’ll taste layers of grass and wildflowers, maybe a little créme frâiche (of which there is none added, by the way). Foggy Morning is life altering on its own, though I also recommend crumbling it into a fresh green salad with Mandarin oranges and a little sweet vinaigrette.