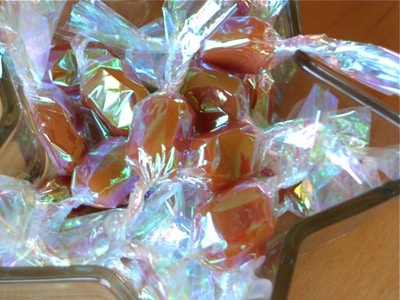 Last year I made a pact with myself to not indulge my consumeristic tendencies by buying my loved ones a ton of stuff they don’t need, and instead opted to make my gifts. After much back and forth on what I should make, I finally decided on a lovely little sea salt caramel recipe made with fleur de sel, or French sea salt.

If you’ve never had caramel made with sea salt – or hot chocolate made with salted caramel – you’re missing out. The fleur de sel creates an amazingly savory layer just beneath the customary sweetness of the candy, making them ridiculously addicting. Can you tell by my proliferation of cheesy adjectives that I’m a fan? Actually, scratch that – I’m hooked.

Word to the wise: making caramel is a serious undertaking. It’s a commitment and you need to pay attention, lest you overcook your caramel and end up with burnt glop. Seriously, folks – all it takes is two minutes of not stirring and your caramel will acquire an icky charred taste. Unless you like that (some people do like the smokiness of slightly burnt salted caramel), in which case, go for it!

Also, hot caramel is dangerous and has a consistency not unlike napalm. If it splatters, spits, or spills, you’ll be glad that you’re wearing long pants and closed-toed shoes, so be sure to put them on. Also, make sure that any free-roaming tots are stowed safely in your overhead compartment (read: far, far away from your work area). Babies and boiling syrup don’t mix.

Now that I’ve sufficiently frightened you off, I have to say that making salted caramel really isn’t that difficult. It’s a lot of fun, and the end result is ridiculously satisfying. When your loved ones pop these little gems in their mouth, the look on their faces will be gratifying enough to fuel your candy-making urges for years to come.

A note on wrapping: do you see those pretty wrappers that I used in the photo up top? That shiny plastic is called cellophane. Cellophane is the only thing, besides parchment, that this sea salt caramel recipe will not stick to. Caramel will stick to glassine, ceramic, plastic wrap, and those cute little mini foil and paper cups you buy at the baking store. Learn from my mistakes and just buy a roll of cellophane, cut it up into 4″x4″ squares, and wrap up your caramels by hand. It’s a really fast process with two people and a system in place.

Finally – make sure not to eat them all yourself. I gained eight pounds and 39 cholesterol points during the month I spent making these as “gifts.” 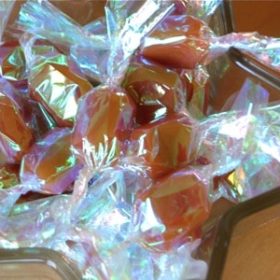