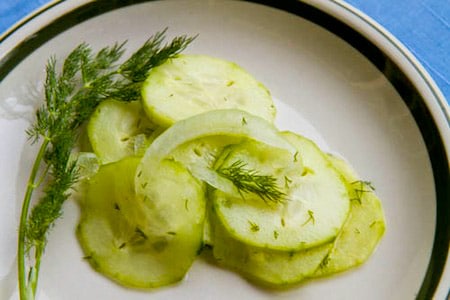 Today’s German pickled cucumber salad recipe – aka Gurken Salat – goes along with a few other German recipes I’ve got here on Fearless Fresh. Be sure to check out this Bavarian torte with nectarines and what I consider to be the most amazing shortbread cookies I’ve ever eaten.

As anyone with a garden will tell you, it’s cucumber season. And they’ll share this fact by dropped a heaping bag of cucumbers off on your front porch and then speeding away before you have a chance to stop them, while you lob a combination of curse words and cucumbers at the back end of their retreating vehicle.

Summer is a simple time, so any food you make this time of year should be equally easy. (Like Sunday morning, amiright?) If you’ve got 5 minutes and a handful of cucumbers, you can put together this cool, insanely refreshing pickled cucumber salad that would also make a great addition to a picnic or potluck.

German pickled cucumber salad – or know by its German name, Gurken Salat – is so simple it’s almost embarrassing. It consists of cucumbers, sweet onions, vinegar, sugar, dill, and… Das ist alles. The only caveat is that it NEEDS to soak for four hours or more, that way the flavour is bursting tart versus sweet, infused in every delicious bite. In a perfect world you’d be able to let it sit overnight, but four hours will suffice in a time crunch.

Cucumbers are pretty easy to pick at the grocery store — get some that aren’t too big, lest they be filled with seeds. For onions, grab a sweet variety like Vidalia or a Walla Walla, though any type will work in a pinch. As for the dill, it can be fresh or dried to suit your preference. Vinegar-wise I use apple cider vinegar, though white vinegar works great as well. I’ve been meaning to try this recipe with champagne vinegar, so if you beat me to it let me know how it goes.

For anyone who happens to be raw onion averse: I can’t stand raw onions (my gut attempts to secede from the nation whenever I accidentally eat some) but the onion really adds to the overall flavor in this salad. I’ve found that the raw onions in this recipe don’t really bother me, since they’ve been soaking in vinegar. However, if you cut the onion into thin round slices, you can still get some of the onion flavor while maneuvering around the raw bits. You can also make this recipe with 1/4 onion to lessen the overall oniony-ness, but I highly recommend you add at least a little to round out the flavor.

There is no need to keep this salad chilled when taking it out to a picnic. If you happen to bring other items that need to be chilled in a cooler, you can chill this too, but it’s not necessary. 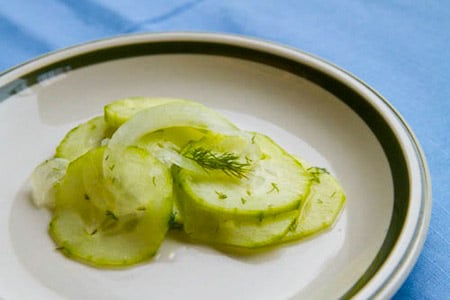 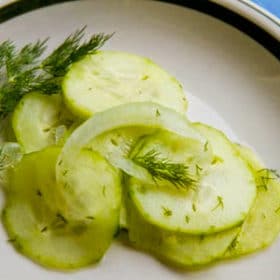