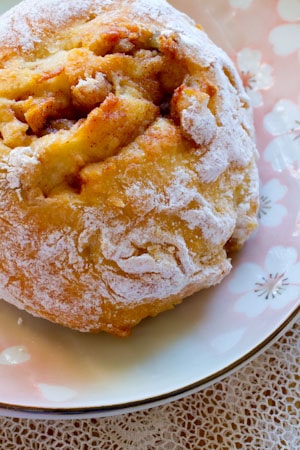 This week I was craving sweetness, so you lucky readers get an all-access pass to my gluten free brioche cinnamon rolls recipe. Clearly I’ve got light, tender baked goods on my mind. What can I say? Lately I’ve been feeling really nostalgic for my pre-gluten-free days, and I miss cinnamon rolls terribly. I long for the big, gooey Cinnabons I used to get at the mall, never mind the fact that besides wheat flour, they’re full of sugar, salt and trans-fat. Ugh.

Last week when I posted my recipe for Gluten Free Chocolate Buns, I mentioned that I lived near the Arizmendi Bakery, which is probably the source of my baked-goods angst. Every freaking morning I smell their breads and cookies, and every time I walk down the street, I get to stare as other people nosh down on some of the best muffins and scones in the neighborhood.

So instead of feeling sorry for myself any further – hey, I’m human, we all do it – I adapted this recipe for gluten free brioche bread to make cinnamon rolls. The first batch I made was ooey-gooey and delicious, but I realized that it wasn’t really what I was looking for. I wanted something a little lighter, a little more “breakfast” and a little less “dessert.” So I made a second batch that still had the sweetness I was craving, but not the sticky-bun factor that I was used to eating all those years ago. I’ll work on the gooey version and post it at some point, I promise!

The base gluten free bread recipe, which comes from Healthy Bread in Five Minutes a Day by Zoë François and Jeff Hertzberg, can be adapted for a wide variety of gluten free buns. Who knows what I’ll come up with next? Actually, I already have a few ideas in the oven (har har).

Note: gluten-free doughs are super, super sticky, and this cinnamon rolls recipe is no different. When the recipe calls to dust with every possible surface with cornstarch, save yourself a lot of trouble and just layer it on. If you don’t, you’ll end up with dough everywhere but in your breakfast rolls. 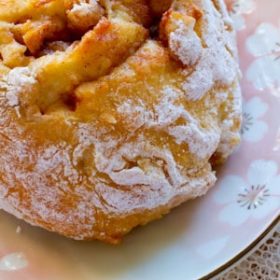