A few months ago, I received a copy of Ready for Dessert, by David Lebovitz. While it’s a gorgeous book with about a billion recipes created by a master of the art of dessert-making, these books always make me a little sad, because I usually can’t eat most of the recipes inside. One day I realized this was silly, and instead of relegating myself to nothing but window shopping through cookbook photos, I decided to start looking through dessert books with a new eye: the de-glutening eye.

Some recipes just can’t be de-glutenized. Others, like cakes and cookies, require a little monkeying, while recipes like pies and tarts often need nothing more than an alternate crust preparation. Occasionally you’ll run across a dish that will allow you to just drop in an alternate ingredient, and then it’s smooth sailing the rest of the way. David’s book has a few of these easy swap-and-pop recipes, and below you’ll find my favorite of the bunch: a gluten free orange almond bread pudding recipe.

I can’t even put into words how good this dessert is. Sure, David’s been at this for years and he’s got baking down to a science, but this bread pudding recipe made me bounce in my seat and brought about a kind of euphoria that you’ll only find with the prefect balance of texture and flavor. Despite the fact that this was made with gluten free bread, David’s orange almond bread pudding still excelled beyond any other bread pudding recipe I’ve ever tried. And that says a lot. 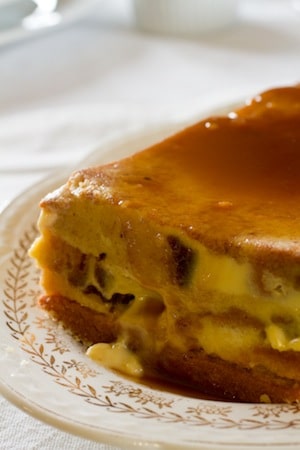 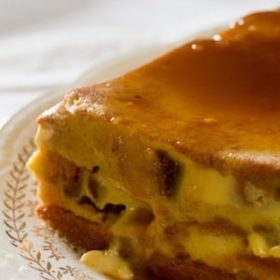 Nutritional analysis does not include sauce of your choice.