Halloween cupcakes are my favorite part of fall! Check out these color little cakes: 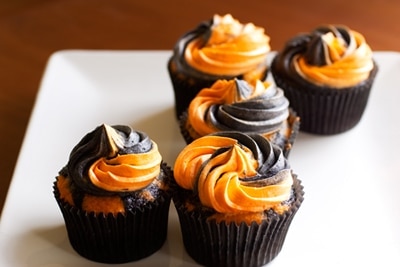 The cupcakes are so easy to make — you just make two different colored batters, then swirl them around in the cupcake cups before baking. Don’t swirl too much, though, or you’ll end up with plain brown cakes! The goal is a marbling effect. 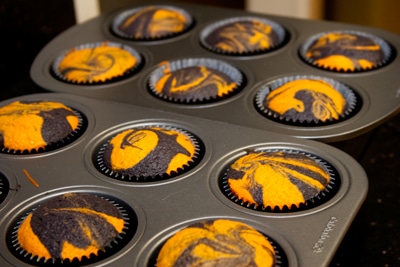 These little cupcakes are almost cute enough to eat without icing! But because we’re a culture of frosting lovers, of course it has to be there. That’s half the fun of a cupcake, isn’t it?

Besides, what else are you going to poke your Halloween decorations into? I love these little bats and cats.

To make the  two-toned orange and black buttercream icing, check out the original halloween cupcake recipe, which also happens to be gluten-free. 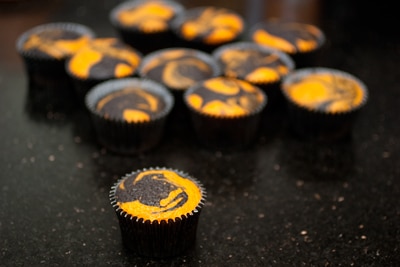 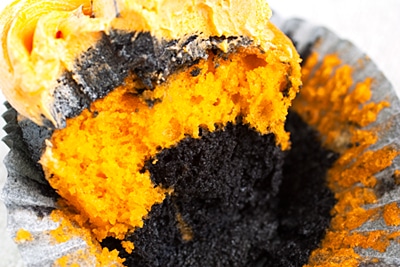 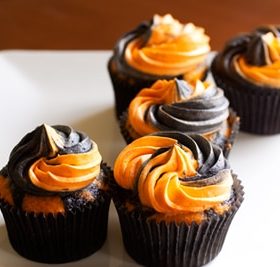 These Halloween cupcakes are mottled with orange and black, making for an awesome display once you bit them open - plus they're super simple to make, and they'll impress everyone who lays eyes on them.
5 from 1 vote
Print Pin
Course: Dessert
Cuisine: American
Prep Time: 20 minutes
Cook Time: 22 minutes
Total Time: 42 minutes
Servings: 12 cupcakes
Calories: 212kcal
Author: Stephanie Stiavetti

Nutritional analysis does not include buttercream frosting.