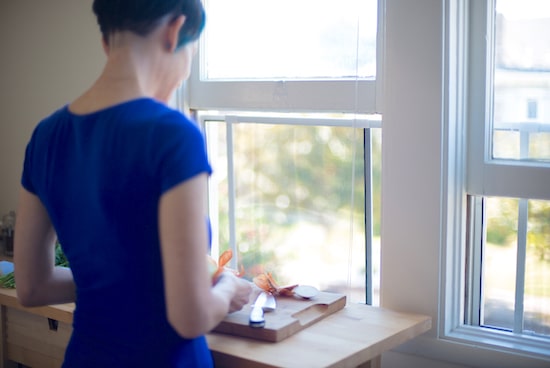 I once had to deliver something to a local student’s house, and after knocking on the door, she invited me in for a cup of tea. I was surprised by what I saw in her kitchen.

This very nice lady had​​ a big shelf full of cookbooks. Like, over 100.

I was surprised because this woman swore up and down that she could not cook if her life depended on it. How was this possible with so many cookbooks?

In our one earlier lesson, ​​she was very timid. She never made a move without me asking her to do something and often apologized for the way she did things. This is super common in cooking classes when a student is a total beginner, but I wondered how she hadn’t gotten a little more comfortable in the kitchen from working with her cookbook.

​​As we sat over tea, I asked: “How often do you cook from these gorgeous cookbooks?”

She blushed and looked at the floor, then took a nervous sip of tea. “I like the pictures,” she said, “but the recipes don’t make any sense to me.”

She explained how she bought these books because she wanted so badly to make the recipes in them, but since she wasn’t familiar with some basic concepts — like how to chop an onions or how to use fresh herbs — she felt intimidated because the cookbooks were over her head. Her cookbook recipes always seemed to end in failure, so she gave up on the cookbooks.

Cookbooks are AWESOME, but they often make assumptions. They assume that everyone has the skills to execute the recipes in the book, when in reality most home cooks are missing key knowledge, and that missing knowledge gets in their way. This goes for advanced home cooks, too.

So many would-be home cooks feel deflated after relying on cookbooks to teach them how to cook. This is because most cookbooks don’t offer a comprehensive education.

What was I dropping off to my student that day? She’d just ordered the mega-bundle set of cooking cheat sheets because she was tired of feeling like a newbie in the kitchen. She wanted to have the printed cheat sheets handy in a binder, and also the digital cheat sheets so she could cook from her iPad at her sister’s house.

​​The good news is my sweet student stuck to the cooking cheat sheets and learned her core techniques in only a few weeks, giving her a solid foundation to build her cooking skills upon. ​​

​​She’s now cooking up a storm with her cookbooks! ​​Last time I heard from her, she’d made a huge leg of lamb and her husband had been so proud that he took the leftovers to work, so he could share with his coworkers and brag about his wife’s new cooking skills. ​​​​​​​​

I wish you a holiday season full of good food and great memories in the kitchen!​