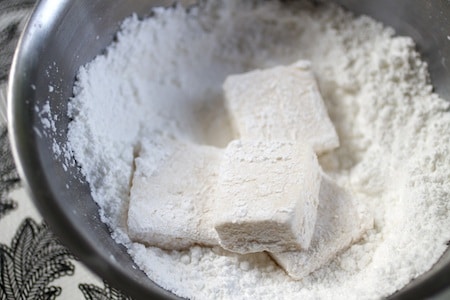 I’ve been wanting to make homemade marshmallows for ages now, but being an avid baker, I’ve never really had a reason. I love marshmallow fluff, but don’t eat the stuff very often — store-bought Stay-Pufts (or their generic counterparts) never really did much for me, with their weird, dry texture and powdery coating (though they were good in a cup of freshly made hot cocoa). And believe it or not, I’d never had a non-store-bought marshmallow in my life.

With the holidays rolling around, I was looking for a sweet cooking or baking project that I could take with me to my family’s house on Christmas. After flipping through a handful of my favorite food blogs, past a billion fudge and holiday cake pop recipes, I came across a tutorial for Peppermint marshmallows on my friend Jun’s site. That little feeling stirred in my gut, the one that tells me that something is going to be fun. I’d found my project.

So I set about researching the art of making marshmallows. The recipes were all similar, for the most part, but there were some variances. Most importantly, some contained egg whites. Having never made homemade marshmallows, I’m certainly not an expert — but I’d never heard of adding egg whites to marshmallows. I decided to make two marshmallow recipes, one with whites, one without, to see if there was a big difference.

The first dish I made was Alton Brown’s from the Food Network which did not use egg whites. This recipe was super sticky and I got marshmallow fluff everywhere, but the finished product was tender and puffy; not as springy as the ones you get from the store, but I’m not a huge fan of those anyways. What I liked best about this particular recipe is that the marshmallows were moist, not like the parched, cottony ones I’d grown up with.

The second making marshmallows recipe I tried was from Gourmet Magazine, which used egg whites to add a little more airiness to the finished product. The reviews on this recipe promised fluffy, flavorful marshmallows and it delivered. Adding egg whites didn’t make a huge difference to the level of puffiness in my marshmallows, but they were very good regardless. These too were tender and moist.

If I had to pick a favorite from these two recipes for making marshmallows, I liked Gourmet’s the best. It wasn’t necessarily more light and airy, but with the addition of the egg whites, these fluffy squares had a better, firmer texture, and were less sticky than Alton’s version. If you’re not careful when making marshmallows, it gets everywhere in your kitchen. You’ll find marshmallow fluff on your clothes, in your hair, and stuck to the counter, cabinets, and sink. There’s no way around it, really, unless you’ve got some serious baking ninja skills. Clearly, I don’t.

After playing around with a few other variations for making marshmallows, I came up with my own recipe using a healthier sweetener – brown rice syrup – instead of corn syrup, though you’re free to use whichever you have on hand. Of course I favor my own over the two above, but I invite you to try them all and let me know which you like best. 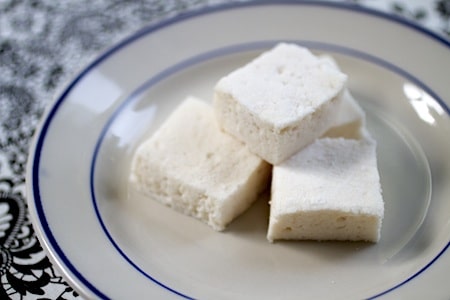 Also, check out this later post for a luscious chocolate marshmallow recipe. 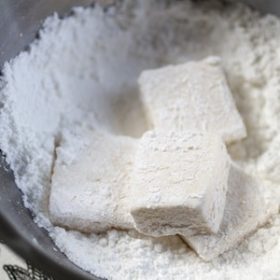 Nutritional analysis is based on using the corn syrup option. 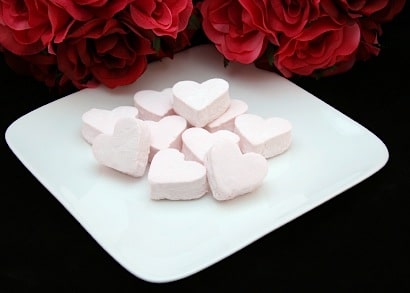 If you like this homemade marshmallow recipe, check out these others: