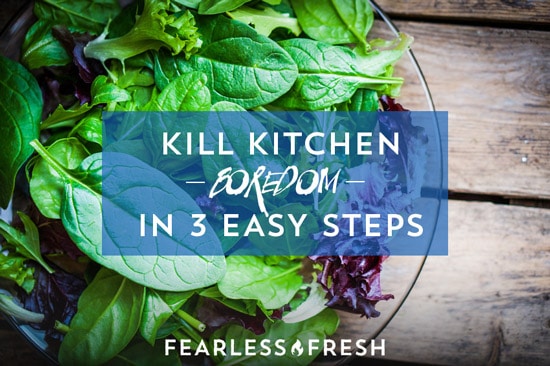 – Cooking at home doesn’t have to be boring. –

We’re officially knee-deep into 2015, and as usual I’m surprised at how quickly time is moving. Do you remember how slowly time used to move when we were kids? The school day took forever to pass, and it felt like a full decade between birthdays. And we never had to worry about what to cook for dinner tonight.

Now I go to bed at night and wake up the next morning to find it’s six years later. How does that even happen? I think about this a lot in those quiet moments of life. I suspect it’s because there is such a deep learning curve as a kid, and absolutely everything is a new experience. As adults we’ve pretty much “been there, done that” for a lot of the stuff we experience everyday, so those moments tend to pass unnoticed. And those moments make up the bulk of our lives.

The reason I bring this up is because I know a lot of folks who end up feeling really bored with the dinners they make every night. Cooking becomes a tedious chore, ideas for dinner dry up, and our nightly meal involves eating the same handful of dishes over and over because we can make them in our sleep. Is it any wonder cooking and eating become so… blah? We end up performing the act simply to survive, instead of a going about it as a source of joy. Like those days when we live on nothing but celery sticks. Because that’s what’s easiest.

I get emails every day from readers who are just plain bored with food. They’re all out of ideas for dinner, and the dishes they make lack anything even remotely interesting. These folks know how to cook, but they’re making the same thing every week, like a broken record. Meatloaf Monday. Taco Tuesday. Leftovers on Wednesday. You know where I’m going with this. And I get it – cooking ennui is something that affects us all at one time or another.

en·nui – änˈwē/ – noun
1. a feeling of listlessness and dissatisfaction arising from a lack of occupation or excitement.

In a perfect world, every home cooked meal would be a fun and exciting every time you step into the kitchen, but that’s not always a possibility in our busy modern lives. That said, even the everyday quick-and-easy meals should bring with them some sense of satisfaction, regardless of how simple the recipe is. How do you do that? With a little intention and a sense of adventure.

Three tips for bringing a little excited into the kitchen:

So, spill it: What will you try to add a little interest to your dinner?