For as much as I love jam, I hate jamming. And by jamming, I mean making jam. It’s a hot, sticky proposition – literally – and one not to be undertaken lightly. So when Thad said he wanted to make jam a few weeks ago, it was with a heavy sigh that I agreed.

Now, Thad didn’t want to make just any jam – he wanted to make Garrett’s jam. My lovely coauthor had sent me home with a jar of his own strawberry-cranberry jam recipe a few months ago, and its bright, bursting flavor captivated the thoughts of my dear boyfriend long after he’d polished off the jar.

After putting off the ordeal for a few weeks, we dug out my favorite jam book: The Blue Chair Jam Cookbook, a goliath tome that by all accounts is the Bible of Jam Making. (Seriously – if you are at all interested in jam, you need to have this book. And Mes Confitures: The Jams and Jellies of Christine Ferber) After re-reading the basics, because it’s been a while and jam is one of those things you really don’t want to screw up, Thad and I set about gathering the proper equipment.

I texted Garrett to find out his strawberry to cranberry ratio, and he replied that he’d used equal parts of both. After some thinking, I decided that I wanted a little less oh my god, my face is turning inside out… cranberry tartness and a little more yay yay ya end of summer strawberries! sweetness. Thad and I opted for a 4:3 ratio, favoring the sweetness of strawberries. At this balance we would still have plenty of natural gelling action from the high-pectin cranberries, and I calculated that we would not need to use any boxed pectin at all. Win! Garrett also referred me a similar recipe on his site for more information – and his method for making jam was far less overwhelming than any other jam recipes I’d found. Maybe it’s because I’m a stressed-out simpleton and he just uses far fewer words to describe the exact same process, but reading his recipe for jam actually made me look forward to finishing the project. He also mentions adding vanilla to create a balancing sweetness to all that cranberry tartness, but let’s face it: Garrett like adding vanilla to everything. Hence the name of his blog.

Garrett also mentioned was that I should use a small amount of butter in the jam to keep it from foaming. Apparently this was a trick he learned from Elise’s mom, and you know what? It really works. That’s one of those little bits of information I’ll file away forever. Thanks, Garret and Elise’s mom!

A few days later, we got to jamming. Being Thad’s first canning experiment, I wanted to make sure he got the full experience (heh) so I sat back and watched him go about prepping and stirring. He was having a great time until the inevitable stage where the cooking fruit bubbles and leaps from the pot in huge blobs of napalmy goodness, but not one to be deterred by a few measly blisters, he persisted. A little while later we were filling jars and setting them to process in a large pot of boiling water.

So, maybe making jam isn’t so bad after all. 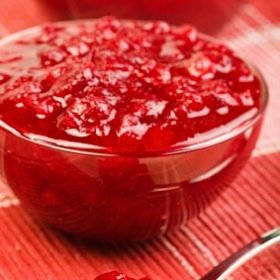