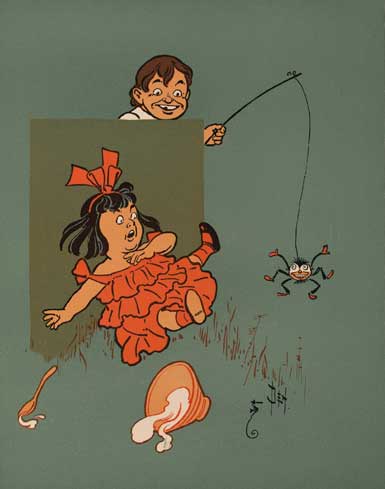 Little Miss Muffet,
Sat on her tuffet,
Eating her curds & whey;
When along came a spider,
That sat down beside her,
And scared Miss Muffet away.

Most children understand the basics of the poem without ever questioning the details. Spider scares girl. Easy, right? In the long run I suppose we don’t really need to know who Miss Muffet is. I mean, come on, it’s a spider. Squoosh the punk and get on with the eatin’. What kid doesn’t understand all of that?

No, the most perplexing thing about this for most children – and, indeed, many adults – is the curds and whey part. What are curds and whey? The terms themselves certainly don’t sound appealing, but surely they must be something grand if little misses are gobbling the stuff down left and right.

Curds and whey are both byproducts of the cheesemaking process and each are parts of the original milk used. You see, during cheesemaking milk goes through a process called acidification, where the milk is made more acidic. The pH level is lowered from 6.7 (milk’s mean pH) to about 4.6-5.2. A lower pH number means a solution is more acidic.

This process is started by adding various bacteria that devour lactose (a natural sugar occurring in milk) and covert it into lactic acid. This acid is what creates the sharpness in cheese and helps control coagulation. The acid also breaks down casein, which is a protein found in milk.

Coagulation occurs simultaneously or after acidification. When rennet, an enzyme needed to make cheese, is added to the acidified milk, curds and whey are produced. This happens because rennet has an enzyme called chymosin in it. The chymosin traps the broken down casein molecules in the milk and binds them into chunks. These chunks are the curds. The milky-colored water left behind during this process is the whey.

The whey is often discarded or used for various other recipes – such as making ricotta cheese – or as feed for barn animals. In home cheesemaking, whey makes a great addition to soups and other savory dishes as well. The curds move along to get turned into cheese.

So what Miss Muffet is eating is just acidic, curdled milk – think chunky, primitive cottage cheese. Is it any good? I have no idea. I haven’t had the chance to try a straight up bowl of warm curds and whey. I know deep fried curds are awesome, so I wouldn’t be surprised if Miss Muffet weren’t punishing a bowl of those along with some jalapeno poppers and a beer. But whatever.