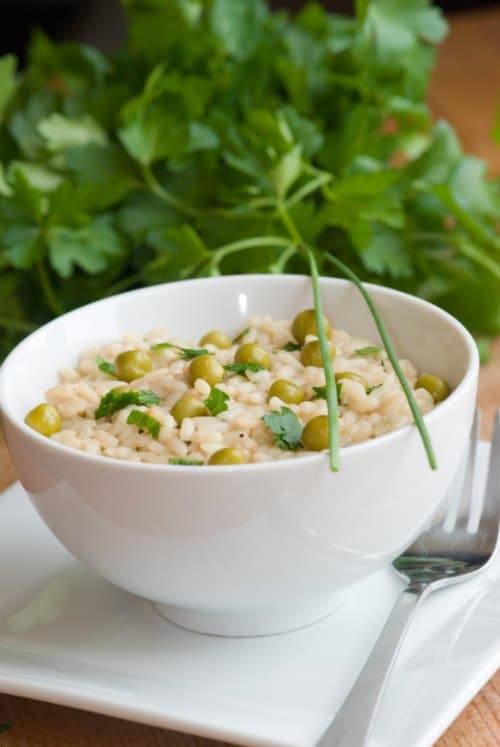 – A bowl of easy lemon risotto – at least one non-evil use for lemons. –

Have you ever had one of those weeks where you want to run around with your arms flailing, head back and gaping, screaming your heart out? I’m in the middle of one of those weeks right now. And the more I think about, the more I realize that this craziness has stretched back over the past month, the past quarter, and almost all the way into the entire first half of this year.

Life loves to throw lemons at unsuspecting bystanders, lobbing little drama-bombs at anyone who happens to be experiencing an unexpected moment of peace and calm. If there’s a Patron Saint of Surprise Crises, I imagine he conducts his affairs as so:

“Sir, you’re looking well. You’ve got a new haircut and are feeling very good about yourself. I’m happy for you. I hereby present you with a lemon! You’ve suddenly contracted some terrible, though temporary, condition that will make all of your hair fall out.”

“Well, good day, madame! You’ve finally saved enough money to buy a new car? Congratulations! Here’s a lemon for you, too, dear. Your dog will fall very ill and require half of your savings to pay his vet bills.

“Aaaah, a buddhist monk. You think that you’ve got it all figure out, don’t you? Some see you as unflappable, but where I come from, we call that attitude ‘smug.’ This is me throwing a lemon at your bald, pointy little head. Watch out for any cars that may just be cruising through the crosswalk without looking.”

Because, you know, life has a hard time balancing solely in regions of good and solid and smooth for more than a few days at a time. There’s always some craptastic problem hiding around the corner, ready to kick your resolve in the gonads and laugh as it lies prostrate in the gutter.

Despite the supernatural lemon-tossing bandit that exists in my head as the purveyor of all life drama, I still like lemons. But I’m tired of making f**king lemonade with all the lemons life gives me. I’m offering up an alternative: lemon risotto.

Because this is a food blog, where I spend an unnatural amount of time thinking about food and relating it to my life in general, I always seem to have a recipe for you. This one is special. It’s a recipe that Thadeus, my partner in crime, made for me because I was having a really hard week. It contains lemons, but not the bitter, hurtful kinds I’ve referenced above. This dish showcases lemons at their best, plucked from the sinewy fingers of that Nasty-Gram Mailman and delivered unto us as something refreshing and perfect.

You need to understand something about Thad. Two years ago this guy was eating processed boxed mixes and whatever sweet junk food was on sale at Safeway, and now he’s developing his own risotto dishes with produce he’s personally selected from the farmers market. I can’t tell you how much that fills me with satisfaction. Not only because I actually have someone in my life who’s willing to cook for me regularly, but because he’s grown as a cook right before my eyes.

On what I think was our third date, we went to a tiny, crappy Thai restaurant on the beach in Capitola. I had no idea he’d never had Thai food before, and I just ordered whatever I felt like. At some point during dinner he picked up a small piece of food from the plate we were sharing, and asked me what it was. I blinked a few times, expecting him to laugh at his own joke. But he was serious.

“That’s a scallop…” I replied and trailed off, surprised that someone in the world did not, in fact, know what a scallop was. Not that there’s anything wrong with that. I had just forgotten there is a whole world of people completely unaware of the food that exists outside of their everyday staples. And I was apparently dating one of them.

Fast forward two years later and he’s developed this dish, his own easy lemon risotto recipe, complete with lemon zest, fresh herbs, and chicken stock that he made himself. A few months ago he perfected the art of the pan-to-oven baked pork chop, creating his own apple juice-based pan sauce and pouring it over freshly made organic mashed potatoes. This week he’s starting work on a galette, a project he’s never tried before but is excited to conquer.

When things get hard — or even downright bad — I have to remember that I’m not the only one here. If I can take a second to poke my head out of my comfy little pity-pot, I can see that other people are learning and growing all around me, creating interesting things that make the world a more delicious place overall. Another perfect example: I’m going to spend next week with my friend Amber, working with a non-profit that helps promote food literacy in California, which she started from scratch and has built into an incredibly noble organization. And I’m going to go to a play at Garrett’s organization, the B Street Theater, where their mission is to “promote education and literacy, social interaction, and cultural enrichment by engaging children in the highest quality theatre arts and playwriting.” On top of all that, Garrett and I are also going to film a trailer for our eager little cookbook, who is just about all grown up. *sniff*

Ok, I get it. Thank you, Universe, for once again spelling it out so plainly that even I can’t miss it. Today’s lesson, written in huge letters across my kitchen wall in red and orange sidewalk chalk: The world is not a cold, dark place.

Just watch out for incoming lemons. They’re no joke. 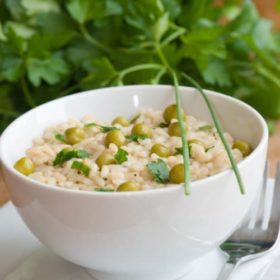 Previous Post: « Decadent No Bake Meyer Lemon Bars, from Bakeless Sweets
Next Post: Life, Honesty, and the Very Best Way to Cook Corn on the Cob »