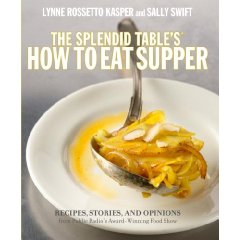 I’ll admit it, I’m have a compulsive cookbook problem. In the past I’ve bought up to three a week, often with very little forethought. I’ve been trying to tone it down as the economy does funny things to my bank account, but I still occasionally splurge – the difference is that now I put a little more thought into deciding which chefs’ pockets to line with my much-needed pennies.

For the past few weeks, I’ve been eyeing Lynne Rossetto Kasper and Sally Swift’s newest book, The Splendid Table’s How to Eat Supper: Recipes, Stories, and Opinions (2008, Clarkson Potter, $35). I’d flipped through it a few times at my local independent bookstore, but I was determined to not cave in to my little compulsion issue. After the third or forth time I’d picked it up, though, I realized that the book and I seemed to have developed a relationship, and that I was no longer in “whim territory.” I finally plunked down the $35 (ouch) and introduced How to Eat Supper to its new home, the precariously stacked pile of cookbooks in my office.

As a regular listener to The Splendid Table radio show on NPR, I had an idea of what to expect out of How to Eat Supper. What I wasn’t expecting, though, was that despite the fact that I’ve had many cookbook loves in my life, this is the first in a very long time to have actually charmed me. The pertinent quotes, the genial stories, and the bravely rampant overuse of font drew me in right away. Kasper and Swift have a delightfully banterous (yes it’s a word, because I say so) relationship and it shines throughout the pages of this 338 page volume. You feel not like a reader but rather a guest in their kitchen, immersed in conversation with these two well-seasoned culinary mavens. Random yet fascinating tips abound – did you know that the color of a hen’s earlobes dictate the color of its eggshells? Who knew chickens even had earlobes? Or that flatfish start out as round fish, and that their bodies morph shapes while one eyeball migrates to the other side of their head? These snippets of culinary miscellany move Kasper and Swift’s book from a mere collection of recipes to bedside reading material, and I’ll readily admit that it’s earned a space upgrade from my office to my nightstand.

Beyond the aesthetics of the book’s format, the recipes included are equally enticing. Nothing I tried was difficult to prepare, and I think that a huge part of How to Eat Supper’s appeal is that it speaks to both picky gourmets and gastronomes of lesser cooking experience at the same time. Most of Kasper and Swift’s dishes are downright easy to make, yet the layering and complexity of flavors scream complicated. Contributing to the ease of success with these dishes are a vast array of tips scattered throughout the recipes, such as “The Pesto Chronicle,” which includes Kasper’s recommendation of using young basil leaves that “should not have even thought of budding,” lest they become too bitter for a “sweet, perfect pesto.”

My personal favorite recipes: the Coriander-Orange-Scented Red Lentil Soup, Edamame and Smoked Tofu Succotash, and Pineapple-Ginger Sorbet. Several dishes weren’t as strong, such as the Almond-Tumeric Potatoes, but for the most part, How to Eat Supper is filled with winners that are not only fairly simple to prepare, but will surely please (and likely surprise) almost any gaggle of discerning dinner guests. You’ll also enjoy Kasper and Swift’s anecdotal style, and it’s not often that you find a cookbook that is a valued culinary text as well as a truly good read.