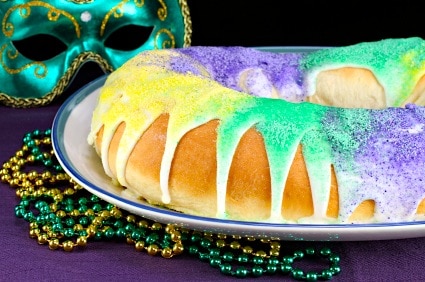 It’s king cake day! Or rather, today is Fat Tuesday, which means it’s time to get your grub on before the Lenten fast begins. Ok, I’m not really going to fast – that tradition died out in my family ages ago. But, in celebration of Mardi Gras, I did dig out my favorite king cake recipe.

If you’re not familiar with king cake, you might be surprised to read that most recipes require you to knead the dough. Dough in a cake recipe, you may ask yourself? That’s because this baked ring is less of a traditional cake and more of a bread. A brioche-like yeast bread, in fact. Despite their yeasty, non-sugary flavor, Mardi Gras king cakes often contains a sweet filling rolled up in the middle, and are then covered with glaze and colored sprinkles. It’s not a super sweet treat, save for the diabetes-inducing glaze and sprinkles. Also, king cake recipes often employ the use of citrus flavoring – like candied citron, orange zest, etc – so they have a very unique flavor.

The first time I made a Mardi Gras king cake recipe, I fought with the dough tooth and nail. I didn’t have a Kitchenaid Mixer onhand, which the recipe called for, so I had to mix everything by hand — not normally a big deal, except for the fact that I also had to incorporate the cold butter into the dough, which isn’t easy using your hands when you don’t have a pasty cutter. I was convinced that the dish was going to fail. There was butter all over the kitchen: on the counter, under the cabinets, smeared across the wall… everywhere but in the dough, it seemed. But still I trudged on, and put the dough out to rise.

Color me surprised when a few hours later, I found I had a perfectly-risen ball of brioche-like dough sitting in my mixing bowl. Hallelujah! But my foibles didn’t end there… I also forgot to add brown sugar to the filling, so my king cake was anything but sweet on the inside (thank god for the super-sugary glaze and colored sprinkles!).

I guess that goes to show that even us cooking pros making mistakes when we’re not paying attention. Ce la vie.

One thing I should mention is that there’s a little plastic baby lodged in the middle of a traditional king cake recipe. This little guy is supposed to signify Baby Jesus, and whoever gets the slice with the baby in it is supposed to have a year of good luck (or, depending on who you talk to, they’re the ones stuck making the king cake next year). Please, for the love of Baby Jesus, do not bake the plastic baby in the cake. It will melt, obviously. You have two options: push the baby into the underside of the cake after it’s cooled, but before you glaze it, or buy a hard sugar baby made for especially for baking.

And for those who want a little background on Mardi Gras itself, this Wikipedia entry will give you the down-low in just a few paragraphs. To sum it up:

In many areas, the term “Mardi Gras” has come to mean the whole period of activity related to the celebratory events, beyond just the single day. In some US cities, it is now called Mardi Gras Day or Fat Tuesday. The festival season varies from city to city, as some traditions consider Mardi Gras the entire period between Epiphany (or Twelfth Night) and Ash Wednesday. Others treat the final three-day period before Ash Wednesday as the Mardi Gras. 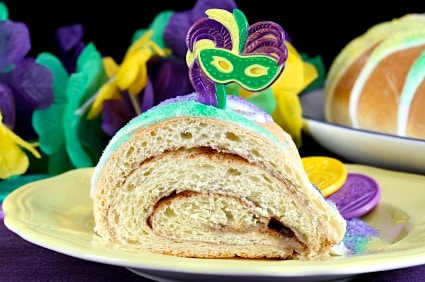 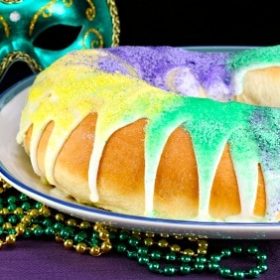