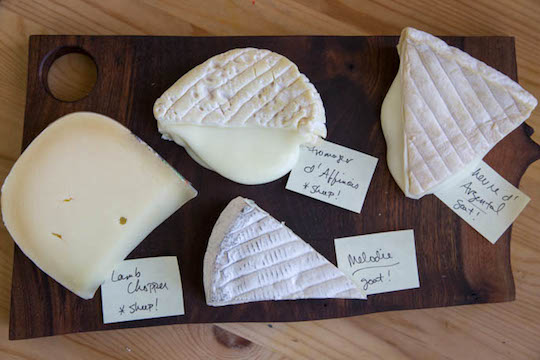 It seemed to us that the best way to really begin a blog about a book would be to give a bit of focus to its subject: macaroni and cheese. Of course, getting down to the nitty gritty of things in that academic way of thinking I’m such a fan of, I figured that perhaps it would be best to discuss milk. (Steph, not so much a fan of my professedly erudite and dull diatribes, has edited out from the manuscript all my furthermore‘s, et al’s, and other words not commonly found outside an Oxford library. Probably for the best, though.)

Then again, the vast varieties of cheese might be an overwhelming task to tackle in one post the same way reading the collected works of J.K. Rowling in a single sitting would be. Simply too much to fuss with.

So let’s break down cheese to its core component. I mean, really.

It’s all about the milk.

Good cheese is made from good milk. Mind blowing cheese comes from the best milk. I hope you’re taking notes.

Good milk comes from happy animals. (the California milk advertisers were right!) Happy animals are loved and have room to frolic. They eat grasses in the warmer months and an assortment of dried grasses and grains in the autumn and winter. They digest this good diet to produce excellent milk for their young–and for cheesemakers to make into cheese. (believe me or any dairy farmer – animals appreciate being milked and will line up for a good milking.)

Goat: Goats produce clean milk that has a very goaty smell and flavor, and some say the resulting cheeses have a minerally taste at times. Goat milk and cheeses can also be rather sour, tangy, and perhaps even a bit spicy. A goat produces about 2 gallons of milk a day, which is very rich and extremely high in nutrients.

Sheep: Sheep produce yellow, creamy colored milk that has a slight shimmer due to the amounts of proteins and fats in it. For this reason, the resulting cheeses are often slightly oily and a little golden in color. The flavor is often barnyard-y and nutty, with scents of dry grass.  While sheep produce roughly 2 quarts of milk per animal, you can actually make more cheese from a gallon of sheep’s milk than with a gallon of cow or goat’s milk due to the high fat and sugar content.

Water Buffalo: Water buffalo only produce about 4 to 6 gallons a day, which is surprising considering their size. The milk is sweet, floral, and aromatic. It’s often described as tasting of flowers, herbs, and grass. It has probably the cleanest “milky” flavor of all the milks. These flavor profiles are reflected in their milk and any cheeses made with it.

These are the most common milks and the ones you’re likely to see cheeses made from, but yaks, camels, and a few other animals can also be milked for cheese. If you come across a cheese made by an animal whose milk you’re unfamiliar with, we recommend you give it a try and see what you think.

Of course, there’s so much more to cheese… rennet, mold, salt, history, biology, chemistry, aging, etcetera and so forth. We’ll cover a lot of these topics here as time goes by. (and in detail in the book!)