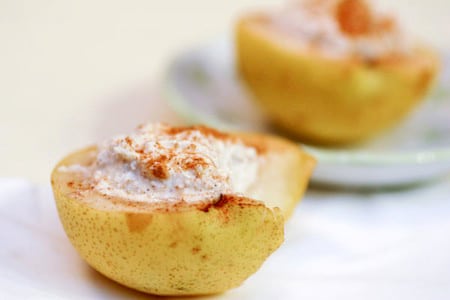 – This ricotta stuffed pear dessert recipe is delicious AND healthy! –

The end of stone fruit season is heartbreaking. All winter long I patiently wait for my first bite of peach, and then just a few short months later, THEY’RE GONE. The whole thing is almost unbearable. <cue the world’s tiniest violin>

It reminds me of a fleeting romance, where the first few weeks of the relationship are perfectly delicious, and then your would-be Mr. Right skips the country.

Only one thing could lessen the blow of such a tragic loss: a replacement. In this case, it’s the beginning of Asian pear season. (Or, a really tasty sugar-free pear jam recipe.)

Late August/early September in California signal an influx of Asian pears (also know as apple pears to some folks). These sophisticated little beauties are more than willing to step up and fill the gap left by their cheeky predecessors. Don’t let them fool you, though.

While Asian pears may seem innocent enough on the outside, inside they’re dripping with a juicy sensuality that rivals even your most luscious nectarine. They may start off as a replacement for your missing mate stone fruit, but they quickly take center stage and captivate you all on their own.

I created this recipe looking for a light and semi-healthy dessert that involved no refined sugar. Pear desserts are right at the top of my list this time of year. The first bite of this dessert was dreamy, and every bite thereafter was kind of a blur. It was so good that I ended up eating the rest of the ricotta filling with a spoon. Because, ricotta.

For this recipe I chose honey over agave since it pairs well with cinnamon, though if you really wanted to you could easily use 1 teaspoon of agave or even 1/2 teaspoon of white sugar if you don’t like honey. Either way, don’t make your filling too sweet. The goal is to elevate the pears so that they sing, so don’t make them compete with your filling. 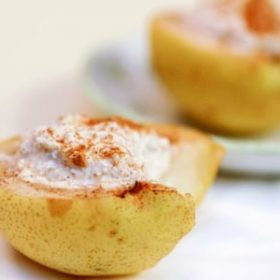