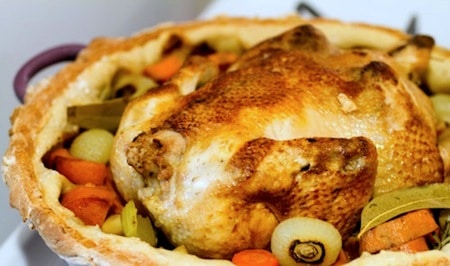 Ever since I received my copy of Dorie Greenspan’s Around My French Table, a lovely gift from Fine Cooking, I’ve been obsessed with the idea of roasting a chicken in a sealed Dutch oven. I mean, just look at the cover photo. That image embodies many of the things I try to convey in my cooking: freshness, comfort, and a thoughtful link to a tender place in all of our hearts.

One of my very best friends recently started learning how to cook, and being at the top of my list of favorite dishes, I was excited to show him how to roast a chicken. And since I’m obsessed with this idea of sealing the pot with dough, what method do you think I showed him?

Of course, my version doesn’t look anything like Dorie’s. Her perfectly smooth dough seal mocks my choppy, crackled version, but I don’t have her years of experience or a professional food stylist at my disposal (and contrary to the belief of some, I think the images in Around My French Table are gorgeous and look perfectly, and edibly, authentic). When I showed Ben how to create the seal, it was clear that I’d hardly perfected the art of the dough seal.

Humbled by Flour and Water

“Ok, you mix the water and flour until you get a workable consistency, like this.” I waved a clubby, mush-covered hand over the dough before turning it out onto the counter. The floury mass landed with an enthusiastic plop, sending a cloud of white floating across the kitchen.

I began to roll the dough into a long, narrow sausage, using my hands to guide and form the shape as it grew across the counter. I continued my explanation to Ben, who stood smartly out of dusting range of the growing white cloud. “It will be sticky at first, so be sure you cover your work surface with flour or you’ll be scraping off dried dough for hours.” I continued working the dough until the sausage exhausted the length of the counter, one end hanging over the edge and the other inching its way precariously towards the sink.

“Hrmmm. Well, I guess we can break it in half and roll two separate pieces, one for each side of the Dutch oven.” I separated the two segments and continued rolling until I’d gotten the smooth sausage-shape to about an inch thick. Together we picked up the dough, but it stretched and drooped, becoming much thinner and less refined-looking that it had just seconds before. We hurried to settle it around the rim of the waiting cast iron vessle. Bits of dough rolled into the pan and onto the chicken, while the other half rolled out and drooped down the side, created a swag of floury stickiness that clung to the enamel.

We squeezed and squooshed, trying to create a seal with at least some semblance of structural integrity. He collected lost dough bits from the counter tried to piece them into the thinner spots, while I stopped and stared, realizing that our seal was only reaching about two-thirds of the way around the pot.

I combined more water and flour, fashioned another sausage-shaped roll, and continued the circus-quality theatrics of trying to get the dough to balance on the tight-wire rim of the Dutch oven, a feat that became more difficult as the dough heated up from the warmth of our hands. Finally, we managed to get the seal to stay put for the half-second it took to get the lid on the damn thing, but a quick inspection of the edges showed a series of empty spots, completely free of sealing medium.

Using the extra of the dough from the second batch, we patched the missing bits to create what we hoped was an effective seal. It wasn’t pretty. It sure as hell didn’t look like Dorie’s.

Ben slid the pot into the oven and we set the timer for one hour. I sighed in relief and spent the next 45 minutes working out my frustrations over a game of Portal 2. When the timer dinged, we broke the seal with a butter knife to reveal a gorgeously tender chicken, at its height of perfect done-ness. Every last bit was cooked through, but due to the seal we’d reinforced around the edges of the pan, there was not a dry morsel to be found.

Somewhere here there’s a lesson to be learned. Maybe it’s that things don’t need to be pretty to be functional, or perhaps this experience says something about perseverance (or, as I just heard in a movie, “You gotta fight for every breath and tell death to go to hell” – though that’s a lot to glean from working with unruly dough). Regardless of the more profound meanings that could be extrapolated from kitchen frustration, sealing your covered cooking vessel with a dough seal earns you one hell of a tender chicken. Dorie might not have been impressed by our ghetto seal, but I’d like to think that she would have thoroughly enjoyed the end result! 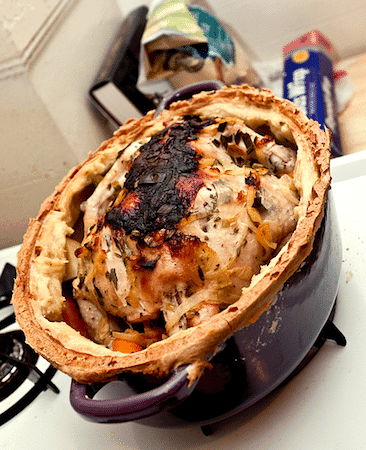 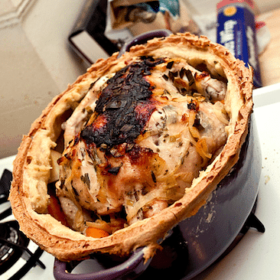