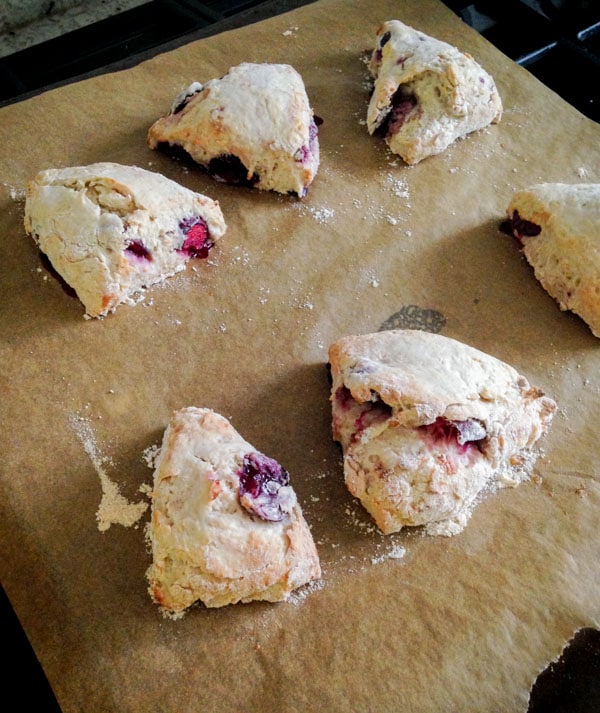 I consider myself a very fortunate person. As lives go, mine is pretty damn good. I’m very lucky to have an abundance of blessings that outweigh any drama that may come my way, though I occasionally have a day where I keep pressing CTRL-Z in my head, praying for an existential UNDO feature.

Despite how senselessly random life can be, there are a few things I’m pretty sure will not happen during any given day. I expect a safe will not fall out of the sky and smash me into the sidewalk; I am fairly certain I won’t turn a corner to discover I’ve been zapped back in time to a Victorian-era coal mine; and I most definitely expect I will not be assaulted by the manager at my local Jiffy Lube while getting the coolant changed in my car.

I’m grateful there are still no flying safes or slave-labor mines in sight. As for the Jiffy Lube assumption… well, what do they say about the word “assumption?” 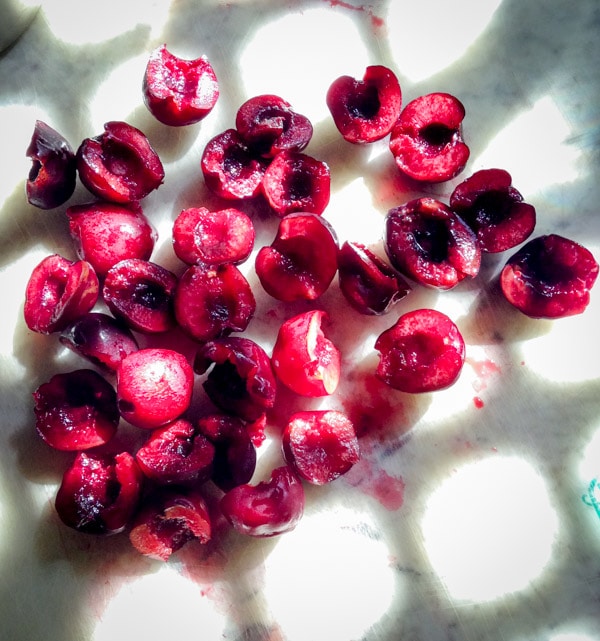 Sorry, you’re going to have to wait a few minutes to get to the vegan scones recipe. I’ve got to share this completely insane story, first.

It was an innocent enough day to begin with. On my way to Sacramento to attend the American Cheese Society conference with Garrett, I went in to Jiffy Lube to get my coolant changed. Because, you know, that’s what responsible drivers do when they’re about to spend a week in 110F weather. I walked into the office after giving my keys to the tech who greeted me, and another man wrote up my work order. Looking at the total on the slip, I mentioned I was told a 10% off coupon would be applied to the fee. The man shrugged his shoulders and told me it’s fine, but this was just the order I should sign to get the work done. He’d deal with the discount later.

Fast forward to 45 minutes later, and this guy is telling me there’s no discount. My response was initially, “Well, why didn’t you say that when I first brought it up? I would have just left and gone somewhere else.” He didn’t have a response, but was still not budging on the discount.

“I am the manager,” he replies.

I sigh. “Awesome. Then I want your boss’ name and number so we can resolve this. I’m not happy.”

Problem is, he refuses to give me the information I’m asking for. Baffled, I ask him what his problem is. He tells me to pay my bill, to which I reply, “I’m perfectly happy paying the bill. I just need the name and number of a person I can contact about this.”

At this point his 6’4″, 240-pound frame is gesticulating wildly as he yells at me, he didn’t come to work to argue, he’s got his wife at home for that! Then he grabs my keys off the counter and takes off out the door. Customers are officially gawking now. I watch him lumber angrily across the work bay and start working on another car.

After a minute of standing there, stunned, I walk out into the work bay and tell him I want my keys back. He says no, I have to pay my bill. I tell him again, yes, I’m totally willing to pay the bill. But he also needs to give me the name and number of his higher-up.

By now the situation is escalating quickly, but he’s got my keys and I can’t leave. Customers are telling me to call the police. The manager walks back in to the office area, goes on again about his miserable home life – clearly what he’s really angry about here is whatever he’s got going on at home with his wife – and demands I pay my bill. He also slipped a very pointed “F— you, b!tch” in the sentence that made the FedEx guy behind me wince. I wave my credit card at him and say, “YES! I’VE BEEN TRYING TO PAY MY BILL FOR FIVE MINUTES NOW!!”

He finally runs my credit card through the machine and gives my keys back. I expect him to give me the name of his boss, who at this point is going to get an earful. He just looks at me.

To say I was flabbergasted would be the understatement of the year. This guy is just digging his own grave but doesn’t seem to be aware of it. I’m finally really, really angry. I tell him he’s being a dick, to which he nearly spits in my face, “You’re a disrespectful redneck b!tch.” He continues to scream and yell for another minute or two, then storms out of the office.

The FedEx guy behind me tells me I should call Jiffy Lube corporate.

“Well, go get in your car, and as you’re about to drive away, take his picture with your phone. Then you’ll be able to identify him.”

I ponder the idea, then worry aloud, “I’m worried he might actually come after me if I do that.”

Looking back, this is probably where I should have just left. But the situation had gotten so stupid at this point that I wasn’t thinking clearly. So I go outside, throw my stuff in my car, put my keys in the ignition and start the engine. Then I turn around and snap a photo of the guy who just called me a redneck b!tch.

The first photo I took was just of this jerk looking down into the engine compartment of a Ford F-150. But the second photo, which my iPhone snapped because I fumbled the camera button, was of 240-pounds of red-shirted, screaming, rabid raging bull charging me from across the work bay, roaring obscenities the entire way. Seriously, I had no idea a man of that size could move so quickly. He grabs for my phone, hitting me in the arm as I quickly swing my hand around behind me and stuff the phone in my back pocket. He stands over me, face just inches from mine, screaming bloody murder.

I don’t know what to say, but now the adrenaline is flowing. I’m feeling 6-feet tall myself. Not so awesome in retrospect. I roar out, “What? Are you f–king crazy? I’m not giving you my phone! BACK THE F— OFF!”

Now he’s waving his hands in my face, threatening that I’d better leave or he’s going to kick my ass. I glance to the side and see FedEx guy hiding in the office, safely behind the windows.

The manager is still screaming at me, calling me names, threatening to do whatever 6’4″ angry men do to 5’3″ 110-pound women when they’re in ego-driven caveman mode. He obviously wanted me to cave, to cower, to cry, to… do something that would affirm his role as a Big Powerful Man.

Cowering and crying are two things I’m not very good at. And unfortunately, in tense situations such as these, my self preservation skills rarely kick in until after the fact. So I stood my tallest, held his hard-ass gaze the entire time, and screamed back, “What, are you seriously going to f–king hit me?? WHAT THE F— IS WRONG WITH YOU??” He roared unintelligibly, borrow a moment of clarity from elsewhere in his currently unplugged psyche, and proceeded to run away, across the work bay, screaming the entire time. A cacophony of F-bombs and redneck b!tches echo from underneath the hood of the truck he was working on earlier.

FedEx guys finally materializes to my left. “I think this is the part where you leave.”

So that’s what I did. I got in my car and left. The adrenaline wore off as I pulled around the corner and the uncontrollable shaking started, making it difficult to think. Call the police! An angry voice inside of me cried. CALL 911! And that’s exactly what I did.

I should also mention here that I was the only woman in the company of two male customers and two other male Jiffy Lube employees. Of these four guys, how many do think anyone stepped in and backed me up while this dangerous animal got in my face and threatened bodily harm? If you guess none, you’d be absolutely correct. The two customers watched from the sidelines while the other two staff guys vanished altogether.

I eventually find my way to Sacramento, where Garrett greets me with a cold glass of iced tea. As I recount the events of the afternoon, he pours in a shot of whiskey. Because that’s what friends are for.

Below are the scones we made that weekend. I was still pretty zonked from the whole ordeal, and a fistful of the world’s simplest vegan scones is exactly what I needed to get back some semblance of perspective over the whole situation. These scones are shockingly easy and can be made in, literally, five minutes. They require almost no kneading; in fact, they’re better if you barely touch them after the dough reaches the sticky, shaggy stage. I recommend you serve them with clotted cream. If you don’t have any – because, who does in the states? – you can make your own clotted cream with this recipe.

And the fact that these scones are made with fresh cherries and coconut milk really makes them a sweet, tart, fluffy experience that will surely soften the edges around whatever drama you’re currently recovering from.

Assuming you’re already out of harm’s way, of course.

And because folks will ask:

Yes, I filed a police report. Yes, I called Jiffy Lube’s corporate office. And yes, I am very, very worried for this man’s wife and children.

Also, it’s worth noting this guy came completely unglued over a $9 coupon. And before anyone asks, no, Jiffy Lube did not offer me any sort of refund for the drama/trauma I had to endure that day. 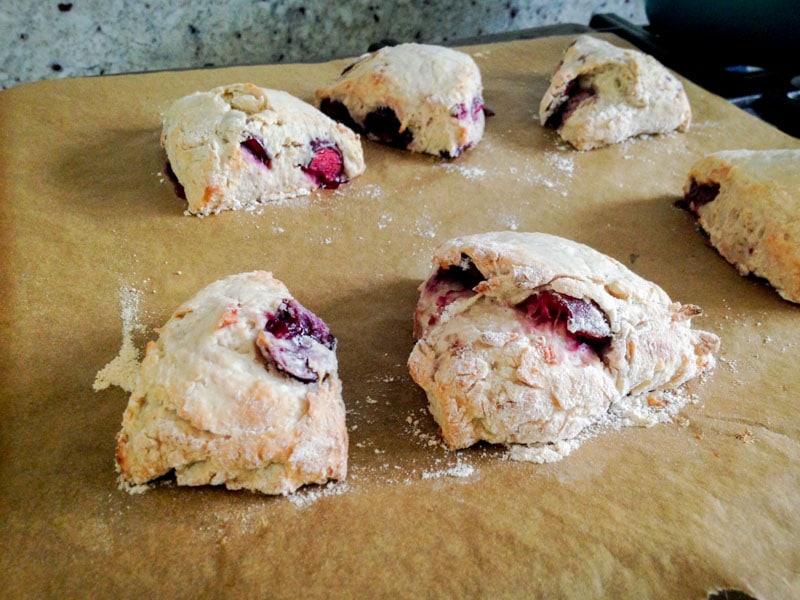 – Oh, right, here’s where I give you the vegan scones recipe. Sorry, almost forgot. – 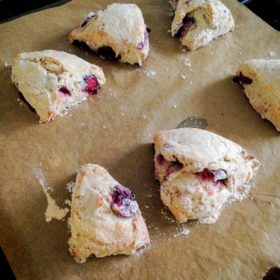 These cherry-coconut scones are the easiest, fastest scone recipe you can possibly think of, and they're vegan to boot (but you'd never know it by the taste or texture). Be sure to not over-knead or your scones or they will be too dense. You literally need to push both palms into the dough, then pull the back of the dough back over itself and push down to squish it into one mass. Fold it in half and repeat the push-pull-squish once more. You're done. Yes, that's it.
4 from 1 vote
Print Pin
Course: Breakfast
Cuisine: British
Prep Time: 10 minutes
Cook Time: 15 minutes
Total Time: 25 minutes
Servings: 6
Calories: 265kcal
Author: Stephanie Stiavetti

You can use regular flour over bread flour, if you like. There will be a slight textural difference, but not by much. Don't over-knead your dough or the scones will lose their fluffy texture. You literally need to push both palms into the dough, then pull the back of the dough back over itself and push down to squish it into one mass. Fold it in half and repeat the push-pull-squish once more. Then stop. Yes, really!

Previous Post: « Chicken Pasta Salad with Feta, Kalamata Olives, and Balsamic Vinaigrette
Next Post: How to Make Cottage Cheese at Home in 5 Minutes »