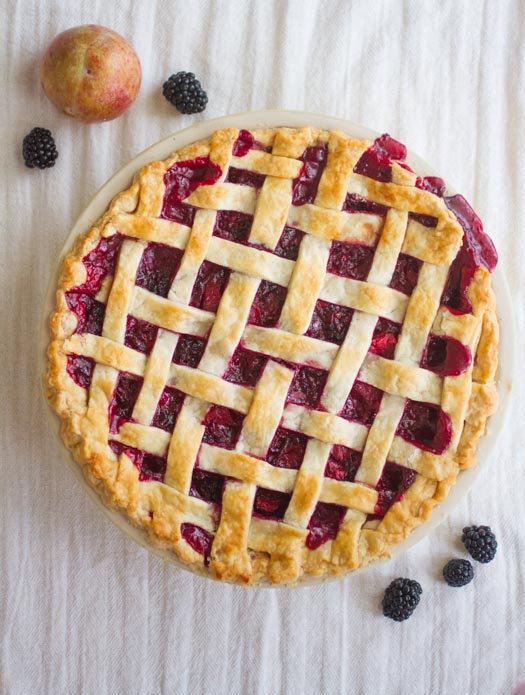 – This easy pie crust from scratch is almost un-screw-up-able. –

Pies are a year-round pastime. Whether you’re making a fresh strawberry pie in June, a savory buttermilk and tomato pie in August, or even a delicious-but-morose-sounding Amish funeral pie in April, there’s no time of year that people don’t make pie. But during the months of November and December, pies seem to explode out of every kitchen. Home bakers go into pie hyperdrive and all varieties of pumpkin pie, pecan pie, and chocolate pies (or awesome hybrids like this chocolate pecan pie) start stepping out like RuPaul.

What do all pies have in common? Crust, of course. And that’s exactly where most would-be pie makers fall short. Pie crust is generally a really simple recipe – with just flour, fat, water, and a little salt – but as with most simple recipes, how you treat that short list of ingredients is super important.

Making pie crust is easy, for sure, but as with most things in baking, there are a few caveats. Because there are so few ingredients, you can’t hide bad technique behind fancy flavors or other distractions. If you want to make a perfect pie crust from scratch, it’s all about patience.

Here are a few important tips for making a perfect easy pie crust from scratch, every single time: 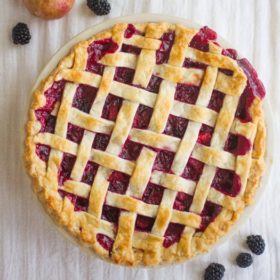 This super easy pie crust from scratch is one of the simplest, most successful pie crust recipes I've developed. It makes two crusts, so you can either make a single pie with a top and bottom crust, or two pies with just a bottom crust. Make sure to read the post above for a list of tips and tricks for pie crust success.
0 from 0 votes
Print Pin
Course: Dessert
Cuisine: American
Prep Time: 40 minutes
Cook Time: 1 hour
Total Time: 1 hour 40 minutes
Servings: 2 9-inch pie crusts
Calories: 125kcal
Author: Stephanie Stiavetti

If you've got time, consider grating your butter with a cheese grater instead of cutting it into 1/2-inch cubes. Don't forget to put it back in the fridge until you're ready to use it. This pie crust is super easy to make and perfect for any sweet filling you want to throw at it. If you'd like to make a savory pie crust, omit the sugar and add 1/4 cup grated parmesan cheese. (Make sure the cheese is cold, straight from the fridge!) You can also add a teaspoons of your favorite chopped herb to give your savory pie a little extra boost in the flavor department. For a truly epic pie crust, use a combination of 50% butter and 50% lard. (Available from your local butcher.)