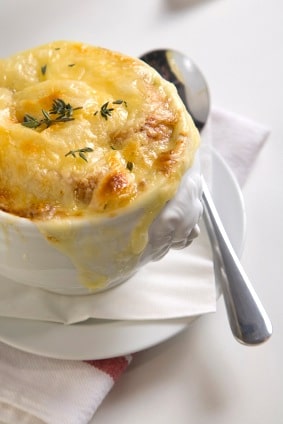 – This traditional French onion soup recipe is simple and amazing. –

I’m a great lover of French onion soup, but for some reason, I’d never actually made it myself. I know, right? It seems silly, but really, it’s just one of those things I’d never gotten around to making.

A few weeks ago, I received a copy of Ruhlman’s Twenty by Michael Ruhlman, and the first recipe I flipped to was French onion soup. As luck would have it, I had a huge chunk of Gruyere in the refrigerator and a whole bag of sweet yellow onions had just arrived earlier in the week from my local CSA. I occasionally toy with the idea of fate, and that night, all signs pointed to my first time making French onion soup.

Before I go into the soup itself, I’d like to talk about the book, Ruhlman’s Twenty. As a food writer, Michael Ruhlman in a unique creature. He doesn’t write cookbooks, or at least not cookbooks in the way that most people consider them: a compendium of recipes. Instead, Michael produces books that help readers build skill and savvy, eschewing linear, recipe-type cooking for a more personal, thought-driven approach. He did this when he wrote The Elements of Cooking: Translating the Chef’s Craft for Every Kitchen, and when he wrote Ratio: The Simple Codes Behind the Craft of Everyday Cooking. And now, with Twenty, he’s done it again.

Obviously, there are recipes in Twenty. Otherwise, how would I be posting the below French onion soup? With this book, though, you’ll find a lot more. Twenty encourages something that a lot of people are afraid of in the kitchen: thinking. So many Americans are terrified of cooking, believing they are unable to create their own dishes, which keeps then bound to recipes for the rest of their culinary lives. What Michael tries to teach his readers in his most recent book is the ability to break free of recipes, to play in the kitchen, and to embrace the creativity that should come with cooking.

Twenty is divided into 20 chapters, each outlining a technique that Michael believes is necessary for a confident home cook to master. The first thing you might notice is that his definition of “technique” is different from the standard. As he explains:

When you look at my list of techniques, you’ll notice that some appear to be ingredients rather than techniques. While they are ingredients, they are also tools, and the best tools have multiples uses. … Understanding all of the uses of a single ingredient is like pumping steroids into your cooking muscles.

So, then, butter is a tool. As is sugar. And the egg. They’re just as important as Twenty’s other, classically technique-driven chapters, such as braise, poach, and sauté. And in learning to use these tools and techniques, you will become a better cook.

It’s also worth mentioning that Michael’s wife, Donna Turner Ruhlman, has packed the book with valuable food photos that show you what you’re supposed to see when cooking. Twenty has gorgeous photos, sure, but they’re not doctored by some off-frame food fluffer. Donna’s photos are real, and they illustrate what you should be experiencing when you make a dish. In cookbooks that’s an unfortunate rarity, as many home cooks become discouraged when their finished product doesn’t live up to the sleek sheen of what they see printed next to the recipe they’re following.

So what’s the final word on Ruhlman’s Twenty? Get it. It will make a great Christmas gift for anyone who wants to learn to cook, or those that have earned some kitchen cred but want to take their skills closer to a level of mastery.

This recipe for traditional French onion soup is a perfect example of an impressive dish that really doesn’t take all that much work, as long as you’ve got a handle on a basic culinary skill – in this case, caramelizing onions. Rich and flavorful, this dish is about as simple as they come. While it takes a few hours to actually get to the eating part, the amount of actual work is minimal because the most time-consuming part is caramelizing the onions. If you’re unfamiliar with how to caramelize onions, check out this video. 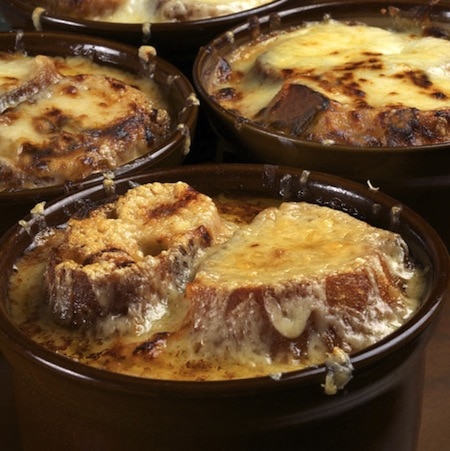 This recipe for French onion soup is a perfect example of an impressive dish that really doesn’t take all that much work. Rich and flavorful, this soup is about as simple as they come.
0 from 0 votes
Print Pin
Course: Soup
Cuisine: French
Prep Time: 20 minutes
Cook Time: 2 hours
Total Time: 2 hours 20 minutes
Servings: 6 servings
Calories: 488kcal
Author: Stephanie Stiavetti

Nutritional analysis is based on, using 8 onions and does not include optional vinegar and wine.