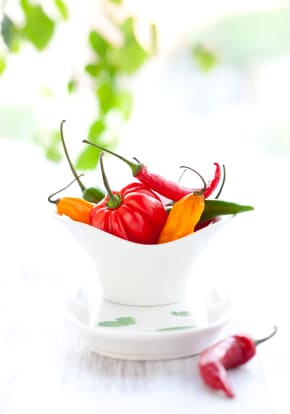 Today’s guest post is compliments of Terry Jones, also known as Thad’s Dad. Terry shares with us his tale of how he came to explore the food world beyond his native Iowa eating habits, thanks to the Air Force and African peppers. Enjoy!

Please bear with me as this narrative will eventually relate to my dinner, but there is a bit of a story that goes with it.

I was born in Spencer, Iowa in 1945. Spencer was, and still is, a major Iowa metropolis in the extreme NW corner of the state (pop. 8000). Finally fed up with long cold winters, my family relocated us to Sacramento when I was 13.

I guess if you are from Iowa, it comes naturally to want to get away and see what’s out there beyond the flat corn-filled horizon (the travel writer Bill Bryson is from Iowa). The Air Force seemed like a good idea, and since I didn’t have a marketable skill from college, the AF made me a pilot. Most would probably think that the pilot ranks would be filled by engineers and other technically skilled endevours. The reality is that the AF couldn’t afford to waste that kind of talent on a pilot, so the pilot ranks mostly consist of English, Music, and History majors. My Geography degree qualified me.

I was working at the Pentagon when I retired, and though my almost 30 years with the Air Force involved extensive travel – 3 years in England, 1 in Thailand, 10 in Germany, and numerous short trips throughout Europe, Asia, and Africa – I wasn’t ready to turn in my passport. After retiring, I went to work for the State Department in their International Security Assistance Program. I spent 11 years with them filling in my passport visa pages. My goal was 100 countries, and I finished with 105. Bandar Seri Begawan anyone?

Now I am totally retired and I just drift around the country, flying my personal plane, and visiting with my sons and granddaughters. And yes, as my oldest son suspected, by the legal definition I was a spy while living in Germany.

In the early 90’s I consulted with the State Dept on a variety of assignments.  During this time I found myself in West Africa on several projects.  At dinner, most restaurants offered a spicy hot condiment served up with a French baguette.  Locally this condiment went by various names most often harissa or peri peri.  Please don’t confuse this with Moroccan harissa or Swahili peri peri as these sauces were strictly local and not related.  After several inquiries, I traced the main ingredient to a hot pepper found in the local markets.

This pepper was ruby red, about the size of a habanero, and outrageously hot.  In 1992 I brought back seeds (please don’t tell the Dept of Agriculture) and raised a plant which bore a profusion of beautiful but fiery hot peppers.  Unable to allow this pepper to freeze in our Northern Virginia winter, I potted my pepper and brought it in for the winter.  This plant survived for over 8 years before it finally succumbed to old age.  Throughout its life it produced wonderful hot peppers which I used as a condiment on almost all my dishes.  I never did find out what I had for sure, but I suspect it was a Congo Red Habanero.

Thus was born my love of hot peppers.  I now raise all varieties of peppers and distribute them to friends and family fresh, dried, pickled, and sauced.  Unfortunately I have found that my tolerance for heat in my food has diminished considerably.

We’re almost there.  When I was raised in Iowa, in the 50’s, the state was held by a predominately farm economy.  As a kid, the big meal was at noon and invariably consisted of meat and potatoes.  Vegetables were almost exclusively peas, beans, and corn.  When my family moved to Northern California, I was exposed to a wider range of cuisines but didn’t really like anything unless it fell within my “Iowa food groups.”

In 1967 I married a gal of Southern heritage and to my dismay discovered that for her, a proper meal consisted of at least 3 vegetables, most of which I had never heard of: okra, squash, kale, turnips, collard greens – you get the picture.  Over the years I resisted this incursion into my Midwestern diet and stuck with peas, beans, and corn.  However, with my discovery of peppers that all changed. Now I’ll eat anything as long as I have my sauce or dried flakes at hand.

Now to today.  I am visiting my son in San Jose this week but he deserted me so he could visit with his girlfriend.  Left to my devices, I whipped up a simple but filling meal. I took a chicken leg, rubbed it with salt and pepper flakes and popped it into the oven along with a potato at 350 degrees.  I took a couple florets of broccoli and mixed them with sliced onion, garlic, and Mexibell peppers (this is a new hybrid of bell and hot pepper I am growing in place of hotter varieties, due to my reduced tolerance for heat).  After 45 minutes, I placed the broccoli mix with the chicken leg and baked for another 15 minutes.  Result was a nice Iowa hybrid meal in one dish for one person – no fuss no muss.