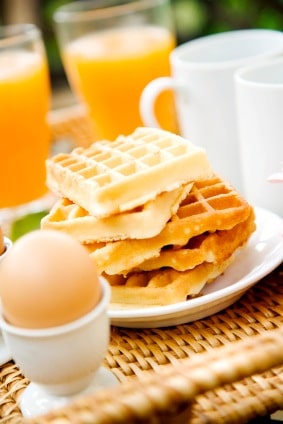 I don’t have any memories of my mom and dad making breakfast for me as a kid. I’m sure it must have happened, because really, can you think of a parent that’s never, ever made their children breakfast? The blank space must be a trick of my memory. At least, that’s what I keep telling myself to get through therapy without jumping off a bridge.

Regardless of any grand pancake and egg breakfasts that may or may not have existed in my past, most of the time my brother and I were on our own for that all-important first meal of the day. There was a lot of cereal, as I recall. To her credit, my mom never bought us sugary junk – we always had Kix, Corn Flakes, Rice Krispies, Raisin Bran, and the like. Even after growing up and buying whatever groceries I like, my mom’s cereal influence stuck hard and fast. I have never in my life bought a box of Cocoa Krispies or Fruity Pebbles. Given my insane penchant for sweet things, I’m surprised whenever I consider this weird little fact.

Amid my missing memories of breakfasts past, I do recall one particularly epic childhood breakfast. I was six years old. My godmother had stayed overnight at our house with my god-brother Joshua, who was a wee lad of roughly four. In the morning we woke up well before our moms, who were probably a little hung over from their “girl time” the night before. My brother Bobby, just a few years younger than Josh, wanted fruit salad for breakfast.

In my family, “fruit salad” is a very specific dish my grandmother makes for every holiday – a creamy, fluffy mass of Cool Whip and canned fruit cocktail. The Cool Whip mixes with the juice of the canned fruit, turning an ethereal pastel color that seems to contain every hue known to man. To this day I can never remember if it’s pink or if it’s green. It always seems somewhere in between.

Like any good kids of single parents, Josh, Bobby, and I decided to fend for ourselves. Being the tallest, I climbed on top of the counter and into the highest cupboard to grab a stainless steel mixing bowl so large that we might have all fit in it if we huddled together. Into the bowl we excitedly threw all the fruit we could find: sliced bananas, apple chunks, and a few cans of cherry pie filling we’d dug out of the pantry. After rooting through the refrigerator, we added a few more colorful goodies that we thought might make our salad even better: celery, carrot sticks, and a potato we hastily hacked up with a butter knife.

At that point we had all the fruit components, but none of the creamy fluff. After much digging for Cool Whip, we turned up nothing but some milk, butter, cornstarch, and a box of tapioca pudding. Being good little chefs, the three of us decided to get creative and add completely random amounts of each.

A taste test told us that we weren’t quite done yet. Something was missing. Peanut butter? Sure. Brown sugar? Of course! A can of petit peas? Well, they’re sweet, aren’t they? In they went.

I’m not sure what else we added but when our moms woke up two hours later, we’d made not only one hell of a breakfast, but one f**k of a mess. There was cornstarch everywhere, smashed peas on every wall, and enough puddles of cherry filling to make the kitchen look like someone needed to call the local forensics team. I don’t remember getting in trouble, but I can still very clearly see the look of shock and bewilderment on my mom’s face. And then a lot of laughter. I might have edited in the laughter, but I’m happy with that memory so I’ll leave it.

Our creation never ended up tasting very good, but we were incredibly proud of it. It was a work of abstract art. Sunken within the thick, pinkish-brown sludge my mom found a whisk, three serving spoons, a jar of cinnamon, a wooden paddle, her favorite spatula, a set of measuring spoons, two measuring cups, a whole orange, the salt shaker, and a mailbox key no one had ever seen before.

Years later, I perfected my breakfast skills. I learned how to make Dutch babies, soufflé pancakes, and a whole host of breakfast buns. Waffles were something I’d never thought to attempt, though. Then I spent the night at Garrett’s house a few weeks ago, and the next morning he threw together a plateful of lemon poppyseed waffles recipe that he made up on the fly. I was surprised at how quickly they’d come together; for some reason I’d always thought waffles were a pain in the arse.

Inspired and curious, I set to digging out my own dust-covered waffle iron the following Saturday morning. Thad awoke to the sound of clanging in the kitchen – always a good sound when I’m involved – and shuffled out of the bedroom to find a plate of waffles I’d throw together with a few things I had on-hand: limes, coconut oil, coconut milk, and a little vanilla to bring a sweetly floral note to the party. The resulting waffles recipe was so good and so sunny-tasting that it’s gone into my “favorite weekend dishes” file. And that, my friends, is not an easy position to earn.

This vanilla coconut lime waffle recipe is a perfectly light, fluffy dish with a touch of tropical flavor. To feel extra luxurious, serve them with creme fraiche and a squirt of tart lime juice. 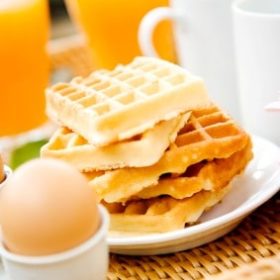 Nutritional analysis does not include toppings.