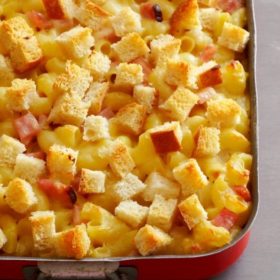 Gruyère, named after the Swiss district of Gruyère, is a lovely, hard cow’s milk cheese known the world over for its seductively melty personality. Luscious and smooth, Gruyère is often paired with Emmentaler to make what can only be described as a superlative fondue.

With Gruyère and Emmentaler intertwined in a heady embrace, we toss Black Forest ham into the mix, making for a sultry ménage à trois of flavor and texture. Topped with chunky cubed sourdough for crunch, this casserole is more than delicious—it’s sinful.

These cheeses are available pretty much everywhere, though you can use all Gruyére if you want, or all Emmentaler. You could swap out Gouda or cheddar for the Gruyère, and plain Swiss cheese or Monterey Jack for the Emmentaler. In other words, use whatever damn cheeses you like in this dish, as long as they're melty and decadent.

Note: you can find Gruyère and Emmentaler cheeses at Trader's Joe's, Whole Foods, Costco, or most natural food stores and artisan cheese shops. I've even seen them at some Fred Meyer, Safeway, Albertsons, Kroger, and Lucky's, though it will entirely depend on the ordering habits of the store's cheese buyer.
If you're hoping to beat the Thanksgiving kitchen craziness, I recommend constructing this dish the day before, including everything but the cubed sourdough topping (we don't want those lusciously crunchy little cubes to get soggy, do we?), and then keeping it tightly wrapped in the refrigerator. Pull the casserole out of the fridge about an hour before you bake it to let the dish come to room temperature. Then, as soon as you pull the turkey out of the oven, add the bread cube topping to the casserole and slide it into the oven to bake while the turkey rests.
Course Entree
Cuisine American
Prep Time 20 minutes
Cook Time 30 minutes
Total Time 50 minutes
Servings 4
Calories 1307kcal
Author Stephanie Stiavetti

You printed Gruyère and Emmentaler Macaroni and Cheese Casserole with Ham and Cubed Sourdough from https://fearlessfresh.com/gruyere-emmentaler-macaroni-cheese-casserole-ham-cubed-sourdough/