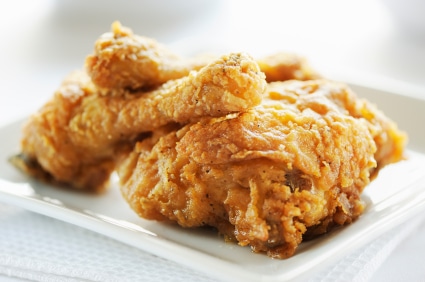 In memory of Gourmet’s passing, I’d like to talk about one of America’s late, great food writers, Laurie Colwin, who used to write a column for this similarly passed (and prized) magazine. And with that, her famous fried chicken recipe.

Even though she wasn’t known for her food writing to begin with, Laurie Colwin is one of our culture’s great culinary writers. Laurie wrote about food on the side while producing novels, and, as the years progressed, she amassed a collection of essays that would infuse American food writing with an inalterable sense of character and compassion. Her words were more than a treat to the senses – they brought heart into the kitchen, helping readers to understand that with great food comes great love.

Her first collection of food essays, Home Cooking: A Writer in the Kitchen, is a brilliant book that has inspired many readers and cooks over the years. Laurie’s writing is warm and inviting, and she’s one of those wonderful women that can laugh at herself (and everyone else) while still sounding sincerely genial.

I think Clotilde Dusoulier put it best when she said, “I felt so full of fondness for the author that I suddenly had tears well up in my eyes, thinking that she was no longer alive, nor cooking, nor writing, and that I would never ever get to meet her.” (from a post to Chocolate and Zucchini, dated May 8, 2006)

Laurie’s southern fried chicken recipe appears in Home Cooking, and to date, it’s the best fried chicken recipe that I’ve yet to find. I’ve followed her directions countless times with regular old white flour, and once I developed a gluten intolerance, I set to finding a way to making the recipe gluten free. So far I’ve discovered that chickpea flour (or a chickpea and fava bean blend) provides a nice texture with a lovely, hearty flavor. This will doubtlessly be one of those recipes that I update for years to come, adjusting it here and there as seems interesting.

Here are Laurie’s tips for making the perfect fried chicken:

If you find a version that works well for you, please leave a comment and I’ll be happy to add your discoveries to the post. Awesome gluten free fried chicken recipes are tough to come by! 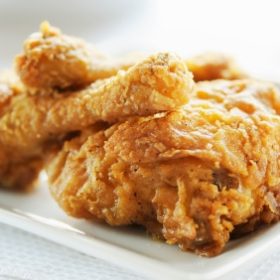