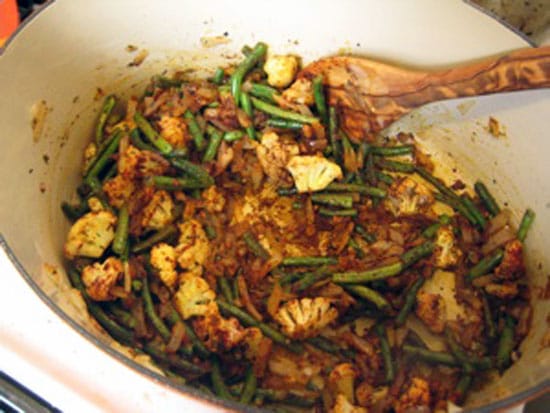 This recipe was also from Lynne Rossetto Kasper and Sally Swift’s How to Eat Supper. I made it last week (see? I lag!) and was very excited to try my hand at a tagine. Tagines are a specific type of Moroccan stew, made in an oddly-shaped cooking dish of the same name. Tagines come in many styles and sizes, but generally adhere to a common shape that creates a semi-seal around the pot, locking in moisture. The steam travels up the conical lid, where it cools and condenses, dripping back down into your food. Because of this process, you can use minimal moisture and still get very tender food out of the thing. Tagines made in a tagine are usually super moist and infused with flavor, and the earthenware body of the dish makes for great heat radiation. A few companies, such as Le Creuset, make enameled iron models as well.

Got it? Good. For a quick primer beyond what I’ve explained here, try the Le Creuset site.

FYI, a good dutch oven will act as a respectable tagine (the dish) stand-in. You won’t have the trippy conical thing going on, but it will still create a decent seal and keep moisture in. This is what I used, as a tagine is one of the few kitchen accouterments that I don’t actually own – my husband has threatened all-out global thermonuclear war if I bring home any new cookware while I have scads that sit here collecting dust.

First of all, the book said that this recipe had a fifteen minute prep with forty minute stove time. That wasn’t my experience, and I had to boil the damn thing for over half an hour to get the liquids to evaporate. Generally a tagine is made with a very small amount of liquid and the conical shape of the dish makes more efficient use of the moisture, but even using a dutch oven I found that the recipe called for too much. Granted, it says “add water as needed,” but with 1/3 cup each of red and white wine in addition to the liquid from the canned tomatoes, the stew was too soupy for a while. Your mileage may vary though, especially if you use fresh tomatoes. If you want to see what it actually looked like cooking, scroll to the bottom of the post to see the video I’ve included of it bubbling away.

Overall, this was a very, very good dish, but in the end I felt like it was missing something. Perhaps you can figure it out because I couldn’t, and I’m usually pretty good with MacGuyvering missing flavors into a recipe. My husband said it was missing meat, which made me think that it’s missing more of that hearty, fatty flavor that comes with a solid chunk of lamb (more traditional to Moroccan cooking than beef, most of you know that lamb has a very fatty, gamy flavor that’s difficult to duplicate). I’m still convinced that it can be made more well rounded without the red meat, which I can’t digest anyway, but I haven’t been able to find a way yet. Let me know if you think of something. 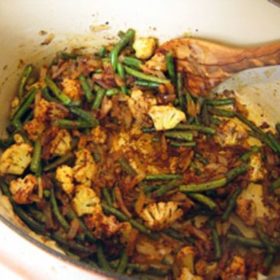 FYI, a good dutch oven will act as a respectable tagine (the dish) stand-in. You won't have the trippy conical thing going on, but it will still create a decent seal and keep moisture in. This is what I used, as a tagine is one of the few kitchen accouterments that I don't actually own.
0 from 0 votes
Print Pin
Course: Sides
Cuisine: Moroccan
Prep Time: 15 minutes
Cook Time: 50 minutes
Total Time: 1 hour 5 minutes
Servings: 4 servings
Calories: 258kcal
Author: Stephanie Stiavetti