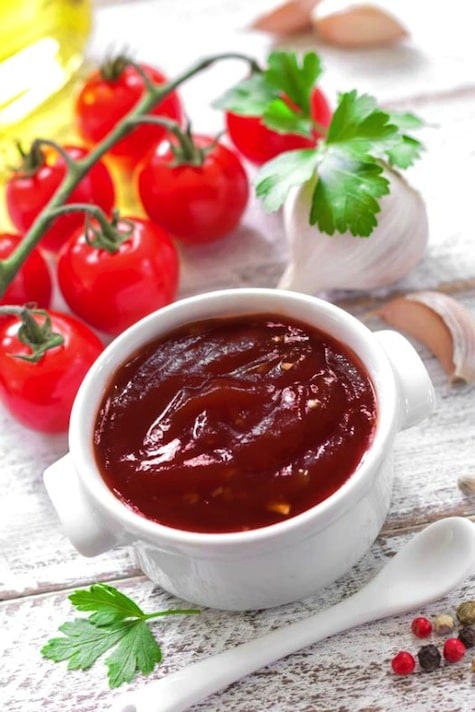 – A recipe for enchilada sauce that brings a little heat and a lot of flavor. –

I have two separate enchilada recipes on my site – one vegan enchiladas recipe with potatoes, Swiss chard, and toasted pumpkin seeds, and another super hearty enchilada casserole with chicken and brown rice –  but no enchilada sauce recipe of my own. So last week I posted a recipe for making super easy homemade enchilada sauce from scratch, and that recipe used tomatoes. Oooooh, that post caused all sorts of drama with the purists!

Anyone deeply familiar with Mexican cuisine knows that traditional enchilada sauce doesn’t actually contain tomatoes – as several folks flamed me last week to remind me. Traditional sauce is made with dried chilies that have been rehydrated and then toasted until they take on a nice, hot, smoky flavor. While dried chilies are indeed more traditional method of making the sauce, the standard American palate is used to tasting tomatoes in red sauce, and every time I’ve made traditional enchiladas for my friends and family, they don’t take to it right away. Americans love their tomatoes, and that’s the whole reason I developed my easy enchilada sauce recipe to begin with. Since it’s been repinned on Pinterest over 4,000 times, I’d say it’s doing pretty well!

Now, I’m not a food snob – I want people to enjoy the food I make. So when people give me flack for putting tomatoes in a red sauce and calling it “enchilada sauce,” I don’t really care. It’s a tasty recipe and that’s all that matters.

That said, I have a huge appreciation for traditional recipes. As I advance my own tastes, I find myself liking new flavors and textures that aren’t familiar to many American tastebuds. But I still need to feed the ones I love, and if they won’t eat it, where does that leave me? Or you, my reader, for that matter? I’ll tell you where: Nowhere.

So I set about developing a hybrid enchilada sauce that uses both tomatoes and dried ancho chilies, calling it [Mostly] Authentic Mexican Enchilada Sauce. This recipe has the tomatoes Americans appreciate, while adding in a handful of the smoky, slow-burn chilies you’d find in more traditional dishes.

I hope nobody takes offense. If you do, please don’t flame me. My index finger cramped up from deleting all the bummer comments last week.

You can make this red sauce as hot as you’d like. As it stands now, it’s not too spicy but will give you a little bit of a sweat if you’re not used to spicy food. If you want to take it up a notch (or five) use a total of four or six dried chilies while keeping the rest of the recipe the same.

I love this recipe because it’s the best of both worlds: It’s familiar while encouraging folks to try new flavors. Consider this a “gateway sauce” for those that want to start exploring more authentic Mexican flavors without jumping cannonball-style into the pool. Serve up your enchiladas with a hot plate of freshly made beans – yes, you can indeed make bean easily without getting them from a can – and you’ve got yourself an incredibly delicious, healthy, and non-boring dinner. Huzzah! 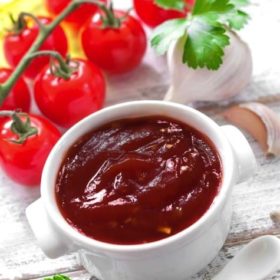 If you're looking for authentic enchilada sauce, this recipe is a good cross between Mexican and American tastes. Cumin, oregano, and ancho chilies bring the Mexican flavor, while tomatoes add a tart layer that Americans have grown to love.
You can make this red sauce as hot as you'd like. As it stands now, it's not too spicy but will give you a little bit of a sweat if you're not used to spicy food. If you want to take it up a notch (or five) use a total of four or six dried chilies while keeping the rest of the recipe the same.
I love this recipe because it's the best of both worlds: It's familiar while encouraging folks to try new flavors. Consider this a "gateway sauce" for those that want to start exploring more authentic Mexican flavors without jumping cannonball-style into the pool.
0 from 0 votes
Print Pin
Course: Entree
Cuisine: Mexican
Prep Time: 15 minutes
Cook Time: 20 minutes
Total Time: 35 minutes
Servings: 6 servings
Calories: 49kcal
Author: Stephanie Stiavetti