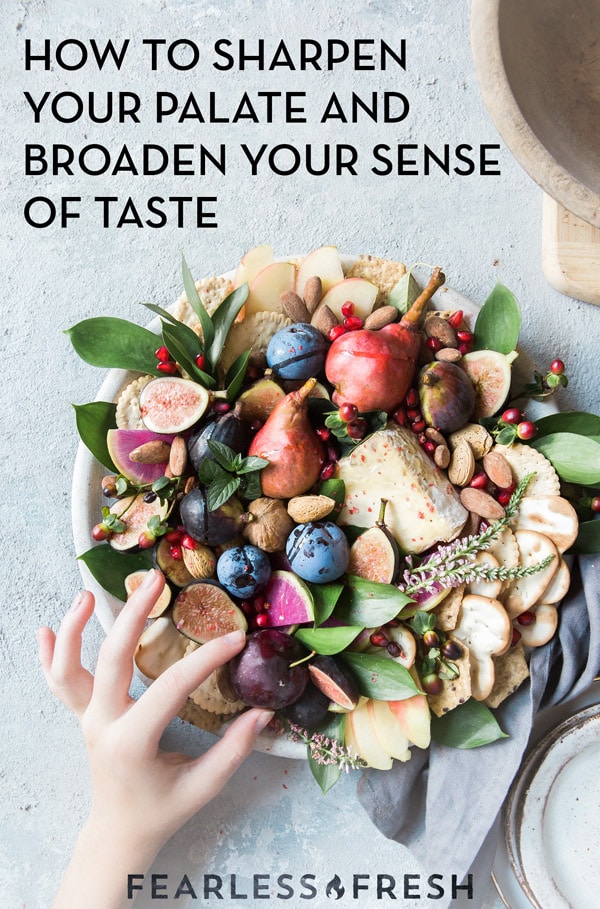 If you’ve ever wanted to develop your palate so that you can become one of those super-taster-y types, the you’ll love this post by Fearless Fresh contributor Robin Donovan. She’s got all sorts of ideas for how you can strengthen your sense of taste and be able to detect more subtle flavors. If you’ve got questions on taste and flavor, drop into the cooking support group on Facebook and get them answered!

When I was growing up, my dad had this weird theory about food. It goes something like this: All food is “good” because otherwise, it wouldn’t be considered food. Someone somewhere must have tasted it and had a favorable reaction to feel like eating it again, and then feed it to his or her family.

My dad said he learned it from a philosophy professor when he was an undergrad at UC Berkeley, but I suspect he just made it up to get me to eat “All The Things” when I was a kid. The thing is, though, it kind of makes sense. Your sense of taste is part biology, part preference, and part experience.

If there is something you think you don’t like, you just need to keep trying it over and over until you “get” why it is good. The theory actually went a little further, saying that you should try foods repeatedly whenever they are offered in a situation where you are having a good time, like at a party. That way, my dad’s theory went, you would start to associate that flavor with happy, good feelings. Eventually you would start to like broccoli, or cilantro, or raw onions. Your sense of taste could actually change, depending on your experiences.

I disparaged this theory for years. There was no way I was ever going to like broccoli (even with these tips on how to make vegetables taste amazing). And don’t even get me started on raw onions or cilantro. But my mom kept serving those things and my dad kept going on about his theory on how I could change my sense of taste.

Then something weird happened. One day when I was a teenager, I was with some good friends and we were having a blast. There were chips and salsa loaded with cilantro. I ate it and…. It was good! Now I love cilantro and cook with it nearly as often as my mom did when I was growing up (a lot).

I told a friend about this theory. Turns out, back when we were in college, she didn’t like olives. Guess what? Now she loves them. I have even come to love broccoli, too. I’m still working on the raw onions. It’s a process.

Improving your sense of taste

Why does your sense of taste seem to change over the years? There are actually two things going on here.

One is that the more you taste, the sharper your palate becomes. In other words, the more you expose your senses to different flavors and aromas, the better you become at discerning the subtleties between them.

But the second part of the equation is even more compelling to me, the fact that by tasting a food repeatedly in situations where you are enjoying yourself, you create taste memories that associate those flavors with positive feelings. Those positive feelings then get transferred to the flavor itself. The next thing you know, just like Pavlov’s dogs salivated at the mere sound of a bell, you start to crave those feel-good foods like chopped liver or bell peppers or that dreaded cilantro.

Coaxing your sense of taste in new directions

I recently explained Grampy’s wackadoodle theory to my 9-year-old son. He’s not really buying it either, but I have to say he has started to eat things he never would have touched a couple of years ago. And it got me to thinking about how this theory could be useful, not just for picky kids and the parents who are legally required to feed them, but for anyone who wants to broaden their horizons and develop their sense of taste.

Start by choosing one food that you don’t care for—say anchovies or Brussels sprouts. Every time this food is available, and you are in an enjoyable environment, force yourself to have just one taste. Keep doing this and eventually, I can almost guarantee, one day you will realize that the flavor isn’t so bad after all. And then the magic happens; one day you’ll realize that you actually want to eat more than just one bite.

Even if you’re not a picky eater, this can be useful in developing your sense of taste and pushing yourself into unfamiliar territory. For instance, what if the next time you’re at a restaurant with friends and having a fabulous time, you notice the menu has a lobster ravioli in vanilla cream sauce and you think, “Wow. What a weird combination. I can’t imagine what that would taste like.”

Your natural instinct may be to skip over it and go for the herb-roasted chicken with mashed potatoes and green beans, but don’t do it. Order that weird dish. Who knows, it may be the beginning of a lifelong love of the combination of vanilla and seafood. If not, at least you’ll have first-hand knowledge of how vanilla and seafood and cream taste together. ?

The best part of all of this is that as you sharpen your palate, expand your sense of taste, and widen your range of “good” flavors. As a result, you’ll become a better cook because you’ll have a clearer understanding of the full range of tastes and how they combine with each other. Plus, you’ll be able to enjoy more foods more. The palate-bending flavor journey never ends.

Robin is a food writer, cookbook author, and recipe developer who is obsessed with creating easy recipes for delicious dishes. She has written dozens of cookbooks including the bestselling Campfire Cuisine: Gourmet Recipes for the Great Outdoors and The Deceptively Easy Dessert Cookbook. Read her food blog, All Ways Delicious.