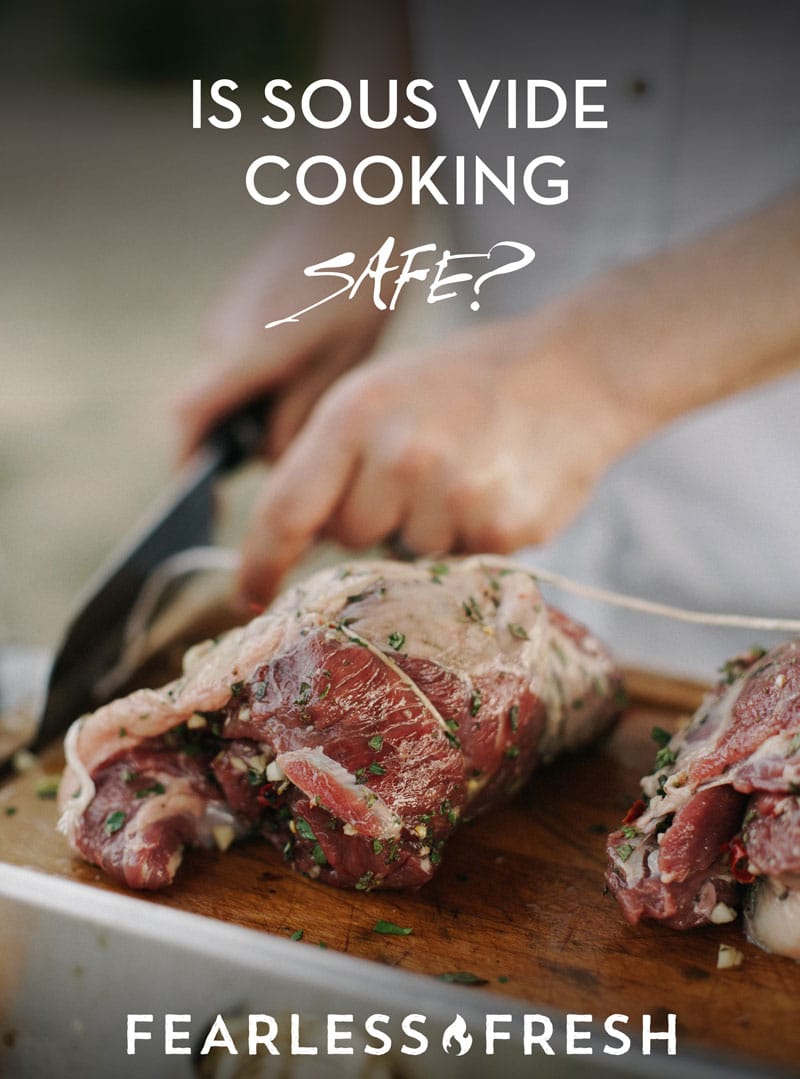 Sous vide safety question: when can it be safe to eat meat cooked at lower temperatures than the FDA recommends, such as in sous vide cooking? (A great example recipe would be Julie’s 24-hour barbecued baby back ribs.) This was a question I stumbled upon on Facebook, and I thought it might be fun to post my response here. The initial conversation started when someone was cooking a roast at 129°F for 72 hours and someone else balked about sous vide safety, saying it was dangerous. It went like this:

This second person was quoting the 4/40/140 rule, a food sanitation rule that states that certain bacteria-friendly foods can’t be kept in the temperature range of 40°F (4°C) and 140°F (60°C) for more than four hours, or they need to be reheated to a safe temperature before serving. This rule exists so that restaurants don’t leave food laying around before serving it to diners, which would make people very, very sick.

And while this rule is true, when it comes to sous vide safety, there are other factors at work.

Foods that are particularly bacteria-friendly are called TCS (Temperature Controlled for Safety) foods, and they’re classified as such because they’re the perfect breeding ground for food-borne illness. TCS foods include foods like eggs, dairy, shellfish, fish, cut melons, meat/meat analogues, and cooked starches like rice and baked potatoes. So it makes sense to be concerned when preparing these foods, because sous vide safety is really important.

So, given that the “danger zone” for bacterial growth is between 40°F (4°C) and 140°F (60°C), and anything that sits at this temperature for longer than four hours need to be reheated, how can someone safely eat meat that’s been sitting at 129°F for three freaking days?! Surprisingly, it can be fine. I’ll explain the sous vide safety principal.

First off: Deciding what to eat is a personal choice for everyone. I am very much NOT telling you that you’ll be fine if you eat under-cooked meat. All I can do is give you some information, but there is always a risk when eating foods that are not cooked to FDA-recommended temperatures. Eating anything cooked below sanitation-approved temperatures can make you sick.

There are a few factors at work when it comes to sous vide safety, the two most important being temperature AND time. So, while you only need to hold red meat at a core temp for 4 minutes at 145°F (63°C) to make it “safe,” you can hold it at other temperatures for varying amounts of time to still reach a similar degree of safety. Here’s a time table for red meat roasts (numbers from the 2013 edition of the FDA-approved ServSafe Manager Textbook):

This list dictates that the lowest temperature you’d want to take a beef roast to would be 130°F (54°C), as long as it’s held at that temperature for minimum 112 minutes. 129°F (54°C) is obviously lower than 130°F (54°C), but it’s pretty close. This is where personal preference comes in. You need to decide for yourself where your safety boundaries are.

There’s also variance between cuts of meat. So, the above times/temps are for a roast, but a chop could be held at temp for less time since there’s less mass. This is an important distinction when it comes to sous vide safety.

Other TCS foods are also likely to harbor bacteria — such as eggs and carb-based foods, such as starches — and need to be cooked to at least 135°F (57°C) to kill off pathogens. That said, if you’re reheating them a second (or third) time, they should be heated back up to about 165°F (74°C) to account for the new moisture you added and structural changes that took place once you cooked them the first time.

Note: If you mix your meat with something like eggs or starchy foods, you need to respect the safety temps of the highest risk food in your dish. So, if you’re reheating a shepherd’s pie, you’d need to cook it to 165°F (74°C) to sanitize the potatoes, NOT 145°F (63°C), which would just sanitize the meat.

It’s also important to note that when sous vide cooking chicken, turkey, or pork, you need to adhere to the specific temperatures of those meats to keep yourself safe.

Another important factor in sous vide safety is where you get your meat and how it was handled. You reduce your risk of contamination if you’re consuming animals that were humanely and health-consciously raised, dispatched, butchered, and stored. Think about it: there are millions of people who have been eating steak tartare for  hundreds of years, and only a very small percentage of them have a tapeworm or other food-bourne parasites/illnesses.  ? If all raw meat were contaminated, how are these people not dying in droves?

In general — and not just in sous vide safety and cooking — you also reduce your risk by consuming meats that come from a single animal, as opposed to pre-ground meats (especially mass-produced ground meats) which contain the bacteria of 346878623^3 animals in every pound. There’s a reason that the generally accepted “safe” cooking temp of ground beef is 165°F (74°C) while that of a roast is only 145°F (63°C). It’s because the risk factor has increased.

Some populations are more sensitive/susceptible

It’s also worth noting that robust, healthy adults are at lower risk for food-borne illness. Other people are at a waaaaaaay higher risk for getting sick: small children, the elderly, and the infirmed/immunocompromised. If you’re cooking for kids, old folks, or anyone who’s health is generally flagging, you need to be more careful.

So, while I’m perfectly comfortable eating steak tartare if I trust both the chef and where she/he sourced the beef, I would most definitely not serve it to my grandma, my little niece, or my aunt with Ulcerative Colitis… regardless of where it came from. It’s just not worth the risk.

Would I eat sous vide cooked meat left within the danger zone for a long period of time?

Well, sort of. This is where sous vide safety and personal preference collide. I tend to be more liberal with temperatures if I know where the meat came from, but in a 129°F (54°C) recipe I’d probably set the temperature to 132°F (56°C) because the difference in texture by 3° won’t make a huge difference. It also allows for variance of thermometer accuracy and temperature fluctuations due to thermodynamics/water convection currents, which can be important depending on the size of your sous vide cooking vessel.

So, is it safe to eat a sous vide cooked roast that sat at 129°F (54°C) for three days? It depends on all of the factors I outlined above. You have to make the choice for yourself, and in order to do that, you need to consider all the angles.