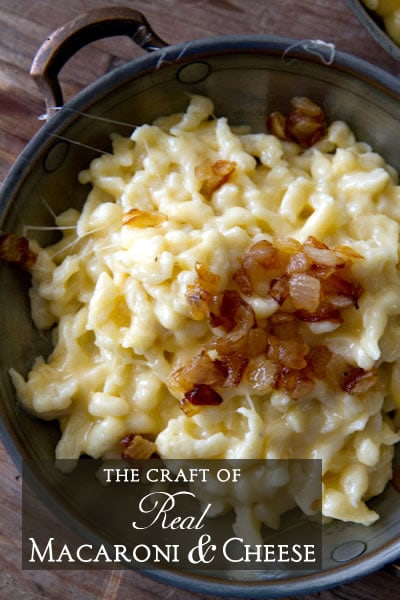 Today I wrote a guest post for October Unprocessed, an awesome event hosted by Andrew Wilder over at EatingRules.com. This year, over 14,000 people have taken the pledge to avoid processed foods for the entire month of October. It’s not nearly as difficult as it might sound; in fact, it’s a lot of fun!

My post outlines how to retool your thinking about macaroni and cheese, especially if you’re used to the stuff that comes in the ubiquitous blue box. If you’re curious about breaking free from that nuclear-colored flavor packet, or even if you’re already comfortable with making macaroni and cheese from scratch but want to take it to the next level, then you should check out this post that explains the basics of making a superlative mac & cheese.

If there’s one processed food that holds the record for the most appearances at America dinner tables, it’s probably macaroni and cheese. I grew up with that very same blue box most of you did, with its starchy, duck-orange “cheese” powder and strangely comforting chemical flavor. If ever there was a flavor that I’ve grown to associate with the color orange, it’s that little Kraft flavor packet.

As I got older, I indulged in what I thought was a much more gourmet version: the yellow box (cousin to the blue box), which contained not an envelope of boring dried powder, but rather a squishy pouch of nuclear-orange goo. I very nearly lived on this sludge for years, completely enamored with its over-the-top saltiness and the fact that I didn’t need to add a single thing to the sauce to make my dinner. For me, this weird pouch of gluey “cheese” was macaroni at its best.

At some point someone taught me how to doctor my macaroni packets, adding hot dogs, potato chips, and even real spices to the goo. Woo-wee! I was living the life of a true gourmet!

Then at 23 years old, I had my cholesterol tested. I’m a relatively small person – only 106 pounds on a heavy day – and pretty active. You can imagine my surprise when my doctor, who didn’t even want to test my cholesterol until I pushed for it as part of my physical, alerted me to the fact that my cholesterol was nearly 300. My doctor was appalled. “What the hell are you eating?” he demanded.

This day shall go down in history as the point in life when I first recognized that there was a difference between processed food and real food. I grew up on the worst of diets – everything I was fed as a child came out of a box, a can, or the freezer. My mom, being a single parent with two kids and a crap job, did the best she could to get food on the table; many nights dinner consisted of concentrated soup or instant ramen, a can of generic green beans, and boxed mac and cheese. I had no idea that I was eating like crap, because in the 70s and 80s, everyone ate that way. It was just what I knew to be normal.

Fast-forward 15 years and I’ve got a very different philosophy on food. Nearly everything I eat now is in its whole-foods form, ideally organic, and most likely cooked from scratch by me or someone very close to me. That includes soups, stews, vegetables, and countless other things I used to eat out of a box, bag, or can. In fact, I can barely stomach processed food these days – the level of salt in sugar completely overwhelms my palate, making it tough to get down more than a few bites before I feel bloated and gross.

Perhaps the most profound change, though, was how my perspective on macaroni and cheese evolved. I went from being a young adult that subsisted almost entirely on dried pasta and powdered cheese, to being the author of a cookbook that creates inspired mac and cheese dishes out of fresh ingredients and small production, artisan cheeses. That’s quite a jump, isn’t it? Now that I’ve been exposed to the world of real cheese, there’s no turning back.

A lot of people believe that creating macaroni and cheese from scratch is difficult, when in reality it takes very little effort and yields results that are a thousand times tastier than anything you’ll get out of a box. If you know how to heat milk and shred cheese, then you’ve got the skills necessary to create a supremely creamy stovetop mac and cheese dish from scratch. The best part is you don’t even need a recipe. Here, I’ll show you the basic ratio:

That’s it. Really. Oh, and some pasta, of course.

Here’s a base recipe for creating a macaroni dish that is both gorgeously decadent and way healthier for you than boxed versions. Down with the powder packet and squishy pouch!
To find out more about October Unprocessed, check out the original post. 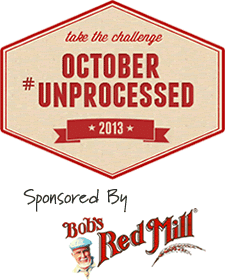 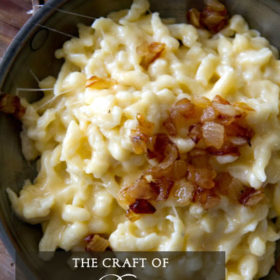 Thinking Outside the Box: the Craft of Real Macaroni and Cheese

This dish is so easy to make, yet tastes like you’ve been slaving away for hours over the stove. You can be creative in your choice of cheese, combining two, three, or even four different cheeses, as long as they’re capable of melting into a sauce. You can also add a handful of cooked vegetables, if you like – in fact, this is a GREAT use for leftover veggies! A few tips: be sure to remove the sauce from the heat before adding the cheese, as heating cheese too quickly will cause it to separate. Also, hold back on the salt until after you’ve added the cheese to the sauce – the variety of cheeses you use will greatly affect how much seasoning you’ll need to add.
0 from 0 votes
Print Pin
Course: Entree
Cuisine: American
Prep Time: 10 minutes
Cook Time: 15 minutes
Total Time: 25 minutes
Servings: 4
Calories: 634kcal
Author: Stephanie Stiavetti

Nutritional analysis based on using a mix of cheddar and Gruyere cheeses and chopped broccoli for the vegetable.

Previous Post: « The Word on Curd: Four Insanely Creamy Soft Cheeses Worth A Mountain of Gold
Next Post: Red Hawk Macaroni and Cheese with Prosciutto and Raspberry Jam »