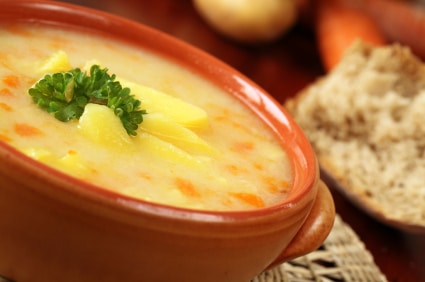 This week I’ve got a special guest post for you – say hello to Heather from Heather in SF as she reinvents the standard potato leek soup recipe. Heather is an accomplished foodie in many ways, and one of the reasons I respect her gastronomical abilities is because she has a knack for taking something old and making it new again. The recipe below is a perfect example of her tasty skillset. Enjoy!

As winter recedes and spring takes her dainty steps forward, we yearn for spring flavors but are limited to winter produce. Sometimes, the best solution is to simplify and intensify the brightness of our chilly weather vegetables.  In this mood, I focused on the bright green sprightlyness of the humble leek.

I found an enormous specimen at the market; fresh, oniony, and fatter than the circumference of my wrist. I sliced it thinly and washed it well in ice water, separating the slices into lacy rings.  Some I scattered on a small baking tray, drizzled with fruity olive oil and Maldon salt, to be roasted until crispy in a slow oven.

In my favorite soup pot I melted a knob of butter and tossed in the remaining mound of leeks and a sprinkling of salt.  They caramelized slowly and filled my little kitchen with the sweet onion aroma unique to the leek. I peeled and diced a fat Russet potato, adding it to the pot along with a few pints of cold filtered water. An aromatic bay laurel leaf was tossed in, bounty from a recent hike, along with the tiniest dash of earthy cumin and a grating of nutmeg from a friend’s vacation in Jamaica.

By the time the soup had finished simmering – until the potato was tender and the aliums succulent – the leek rings had finished baking and were lightly golden and crispy.  A few quick bursts of the immersion blender and my dinner was ready.  I plopped into the bowl of creamy, soft green soup a dollop of tangy sour cream, a few fat curls of sheep’s milk Pecorino and a tangle of crispy leeks.  Each spoonful of this humble pottage yielded a different mouthful of the essence of leek and a promise of spring. 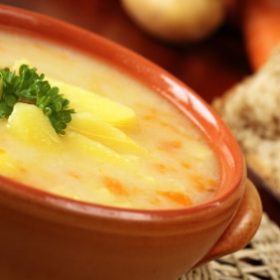 The creaminess of this soup comes from the potato and the addition of sour cream at plating. This recipe is also wonderful without the dairy for a vegan entree or starter. And best of all, this recipe is gluten free!
0 from 0 votes
Print Pin
Course: Soup
Servings: 4 servings
Calories: 86kcal
Author: Stephanie Stiavetti

Nutritional analysis does not include sour cream or Pecorino cheese for serving.