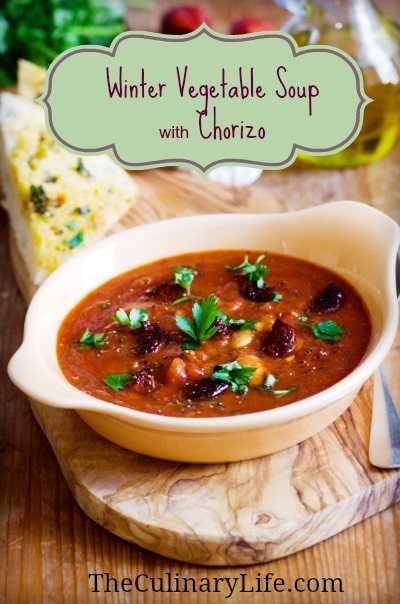 I went out of town right after my veggie box arrived last week, and when I returned home, I had a whole drawer full of vegetables that needed to be used, like, three days ago. I needed a recipe that would make use of broccoli rabe (aka rapini), celery root (aka, celeriac), leeks, carrots, and potatoes. After considering slicing and stir-fying everything together, I opted for a hearty vegetable soup recipe. It is winter after all, and what’s winter if not soup season?

This recipe is vaguely based on a Portuguese soup I’ve made a few times with potatoes, kale, and chorizo. I leave the skin on the potatoes because A) I like the texture, and B) I’m lazy. Feel free to peel them if you’re so inclined and have some free time. You can also easily veganize this recipe by using olive oil instead of butter, veggies stock instead of chicken, and soyrizo or other vegan sausage in place of chorizo.

Oh, and FYI – this simple recipe gets most of its seasony flavor from the chorizo, so if you like it spicy, make sure you get a really strong sausage or use more than I called for. You can even add some cayenne or  chopped Anaheim chillis, if you like. As it sits now this is a nice, mellow winter soup, but you could certainly turn it up a notch by upping the chorizo to veggie ratio or dropping in a tablespoon of pimentón dulce. 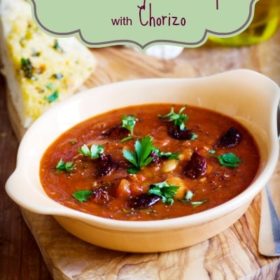 This warming vegetable soup recipe is made with dark leafy greens, beans, and spicy Spanish chorizo. A perfect soup for those cold days when you want to stay in bed. This dish gets most of its warming flavor from the chorizo, so if you like it extra spicy, make sure you get really strong chorizo or use more than I called for. You can even add some cayenne or chopped Anaheim chillis, if you like.
0 from 0 votes
Print Pin
Course: Soup
Cuisine: American
Prep Time: 5 minutes
Cook Time: 20 minutes
Total Time: 25 minutes
Servings: 4 servings
Calories: 454kcal
Author: Stephanie Stiavetti

Nutritional analysis does not include cheese.

Previous Post: « What Is The Difference Between Macarons and Macaroons?
Next Post: How to Make Yogurt at Home »