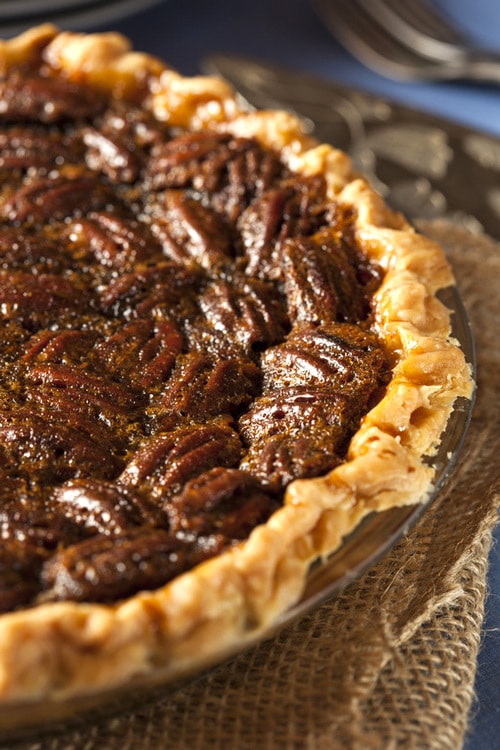 If you’ve never met my famously easy chocolate cream pie recipe, which comes complete with sour cream custard and pecans, please allow me to introduce you.

I have a thing for chocolate and pecans, which you might have noticed with this chocolate pecan pie recipe I posted a few years ago. This pie is a little different, though. This one is a creamy chocolate custard pie, and it’s made with sour cream (because clearly I have a thing for sour cream-based custard pies). It’s playfully tart with loads of chocolate flavor, plus a layer of pecans for crunch. It’s also CRAZY EASY to put together, which is a big plus during the holiday season.

The custard in this pie is seriously to die for. Like, it made me a little lightheaded, like I’d been hanging out in the back room of a recording studio for too long. It’s not often a recipe is so good it makes me high, but this is one of them.

I can’t remember where this chocolate sour cream pie recipe originated from. I was visiting my friend Jack Czarnecki up in Oregon, and after an afternoon of stormy truffle hunting (and tracking truffle poachers, an added bonus!), we went back to his house to shed our soaked, muddy layers and warm up with a cup of hot tea. Jack’s wife, Heidi, had made a chocolate cream pie, to which she’d added a layer of walnuts to gussy it up a bit. She offered up a slice and I dove in face first.

Heidi wasn’t all that impressed with the pie, but I was in love. Maybe it was the fact that I’d spent the previous four hours freezing my ass off while gleefully digging in the mud, but this pie was the first comforting thing I’d eaten all day. She gladly passed along the recipe.

Later that same year I decided to make this chocolate cream pie for the holidays, adding pecans and a healthy dose of sour cream to give it a little more kick in the flavor department. Despite the fact that it comes together in 15 minutes or so – a little longer if you opt to make your own homemade pie crust – it met with rave reviews. I’ve had a few folks ask me for this recipe, so here it is.

I love this chocolate pecan pie recipe because it’s got a luscious chocolate sour cream custard that SHOCKINGLY good. it’s so simple, but with the addition of sour cream and pecans, it takes on a festive air with a touch of tart attitude. I suppose you could also add a tablespoon or two of Makers Mark to the custard during the final mix, though I’d add an additional teaspoon of flour to compensate for the extra moisture.

This recipe calls for a parbaked pie crust, which means you need to bake it for a bit before adding the filling and baking it again. This allows the pie crust to stay crisp even with the moist filling in place. While you can use a store-bought pie crust, I’ve got a recipe on my site that I adore. I’ve also included a handful of seriously pastry-chef level PRO PIE CRUST TIPS so you can totally up your pie game. Check it out: 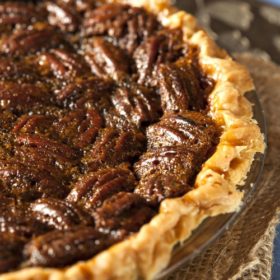 This easy chocolate cream pie recipe with pecans and chocolate sour cream custard (omg) is CRAZY EASY to make. It's playfully tart with loads of chocolate flavor, plus a layer of pecans for crunch. If you don't want to use pecans, you can use walnut halves. They're just as good, just a little different! Check out the post for an excellent pie crust recipe you can use.
0 from 0 votes
Print Pin
Course: Dessert
Cuisine: American
Prep Time: 30 minutes
Cook Time: 45 minutes
Total Time: 1 hour 15 minutes
Servings: 8 servings
Calories: 410kcal
Author: Stephanie Stiavetti

Note for this Easy Chocolate Cream Pie Recipe with Pecans and Sour Cream Custard: You may use 1 cup whole milk plus 1 teaspoon white vinegar as a sour cream substitute. Just add an extra tablespoon of flour to make up for the extra moisture.
This recipe calls for a parbaked pie crust, which means you need to bake your pie crust for a bit before adding the filling, then you baking it again. This allows the pie crust to stay crisp even with the moist filling in place. Trust me, don't skip this step.
If you don't have pecans, walnut halves work just as well. Nutritional analysis does not include crust or garnishes.