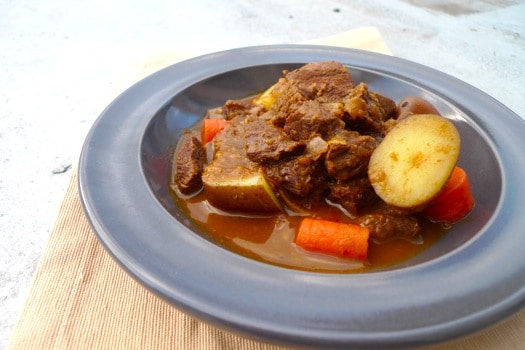 This story starts with a bittersweet memory that still haunts me. When we moved into our apartment in San Francisco, one of the biggest selling points in my neighborhood were both a Japanese restaurant and an Indian restaurant within a few hundred feet. The week we moved in we noticed a sign on the Japanese restaurant saying that they would reopen in three weeks (it’s been well over a year, and they are still closed). And the Indian restaurant? It achieved a feat I thought impossible from south Asian cuisine: boring, bland, blah.

I desperately needed something to spice up my life, so to remedy things, I picked up a copy of Ruta Kahate’s 5 Spices, 50 Dishes at Omnivore Books. My attention was initially grabbed by the book’s aesthetics. Sometimes in life, you can judge a book by its cover. With it’s warm colors, pleasant font choices and thoughtful layout, I felt compelled to take it home with me. 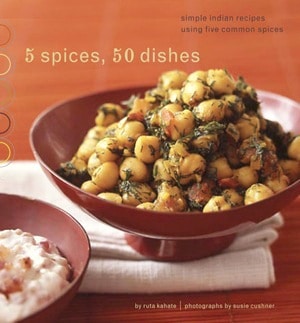 Within the first few minutes of flipping through its pages, I already had a mental list of dishes I wanted to try. The concept is fantastic: an entire repertoire of Indian dishes made with only five easily findable basic spices – coriander seeds, cumin seeds, mustard seeds, ground cayenne and ground turmeric. (The cookbook also happens to be color coded by spice, a useful design addition).

The author, Ruta Kahate, lives in the Bay Area where she leads Indian cooking classes, culinary tours of India and is dedicated to demystifying Indian flavors and bringing them into everyone’s kitchen. Throughout the cookbook her anecdotes evoke memories of a childhood in India, eating her mother’s cooking, traveling and developing a love for food. The writing is warm but spirited. ‘5 Spices, 50 Dishes’ is just as much a pleasure to read as it is to cook from, and many of the recipes center around flavors from Western India: her native Maharashtrian flavors, and dishes from her husbands Goan childhood, an easy entrance into fresh, flavorful and accessibly easy Indian cooking.

The first part of the cookbook is a thoughtful introduction, giving an overview of the flavors, important ingredients, and one particularly useful technique of creating a tadka, a method to give great depth of flavor to the food. She also empowers the reader – encouraging them to use the book as a starting point and allowing for some freedom to experiment.

Included in the introduction, Kahate gives a few good ideas for menu planning to easily incorporate these dishes into one’s repertoire. The book is full of flavorful, accessible dishes that need not be part of a complete Indian meal, but could easily be served with whatever is on hand – for example, a leafy green salad, some store bought chutney or a hot crusty baguette. Many of the side dishes could make great complements to a barbecue or potluck. 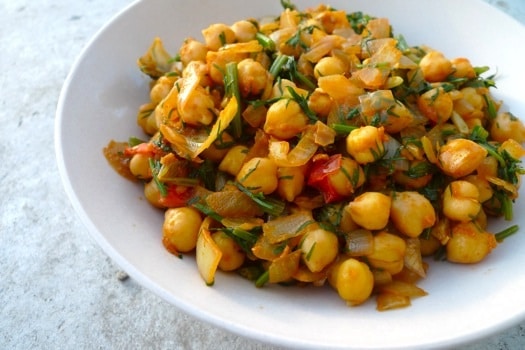 Easy Indian Cooking for Everyone

I ended up cooking several recipes from the book, including the sauteed beets with mustard and lemon juice (p. 31), the black-eyed peas in a spicy goan curry (p. 41) the chickpea curry with fresh dill leaves (p. 42), the Indian brown beef stew (p. 47) and followed her useful recommendations for making a perfect cup of chai (p. 127). It was perfect.

I was actually quite happy with all of the dishes that I tried.

The chickpea curry was light, flavorful, and exactly what I wanted to be eating. I was intrigued that this dish used dill in the traditional Indian way more like a vegetable than a herb.

The Indian brown beef stew actually made *two* appearances at our dinner table this week, once as a topping for a big bowl of spinach, served with some naan bread, and the second time modified slightly with Kahate’s suggestion of carrots. This is one dish that is going to become a staple in my kitchen. 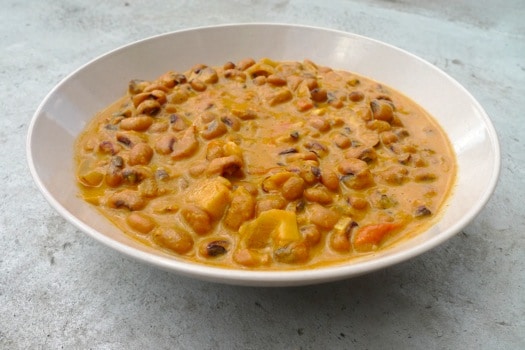 Despite the books overwhelming charm, there are a few minor details that call for comment.

For those familiar with Indian cooking, this cookbook may seem a little simplistic, and indeed Kahate does explain in her introduction section that she purposely avoids certain oils as to not scare off the novice with aggressive flavors. Some amendments I ended up making on my own were using coconut oil instead of canola, dried chickpeas instead of canned and fresh turmeric instead of dried. But seen as a starting point, ‘5 Spices, 50 Dishes’ is sure to encourage anyone tentative about Indian cooking to jump right in and get cozy with these flavors in the kitchen.

Secondly, while Susie Kushner’s beautiful photography makes you want to jump right in and eat everything, not all of the recipes have photographs. This can be daunting for someone who might be nervous about cooking something they have never tried before, but I would argue that after a few successful attempts at her other recipes, trust will be built to try any of the dishes presented.

‘5 Spices, 50 Dishes’ is one of those Indian cookbooks that I see myself actually going to again and again for simple, satisfying weeknight meals, and easy Indian cooking. 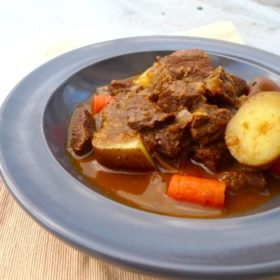 This is what you would call an "everyday" meat curry in India. It's simple to put together, but you'll need to simmer the beef for an hour until tender. Indians accomplish this in approximately one-third that time with a pressure cooker - an indispensable tool in every Indian kitchen. If you have a pressure cooker you inherited from Grandma, dust it off and put it to work; this curry would be ready in a mere twenty minutes. If you favor carrots over potatoes, feel free to substitute them.
0 from 0 votes
Print Pin
Course: Entree
Cuisine: Indian
Prep Time: 15 minutes
Cook Time: 1 hour 30 minutes
Total Time: 1 hour 45 minutes
Servings: 4 servings
Calories: 380kcal
Author: Ruta Kahate's