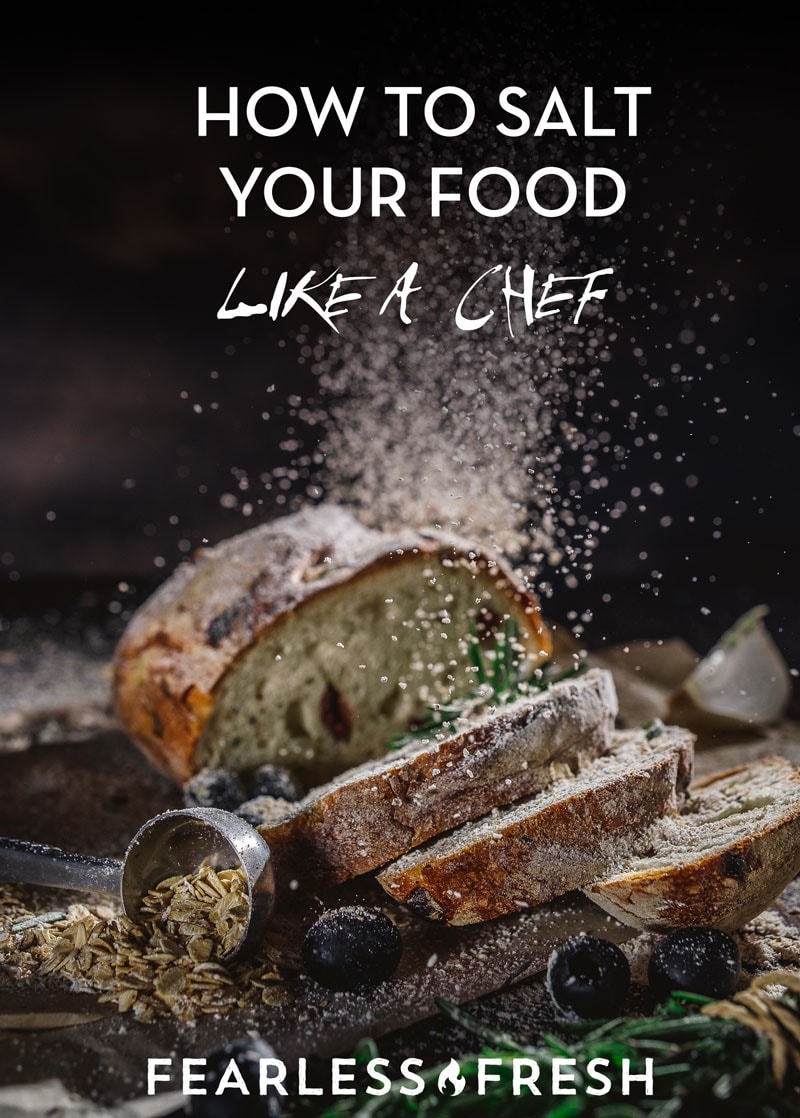 There’s one BIG thing that will make the food you cook taste as good as the best menu items at your favorite restaurant. It’s so simple that I’m almost embarrassed to share it with you.

Yes, seriously. That’s it. There’s a story below that will explain why it’s so important, but I want to share some practical information first.

Salt isn’t just salty — it changes other flavors. While it does indeed have a salty flavor, salt also awakens some flavors while making others less noticeable. Salt makes sweet things less sweet and highlights the sugar that is already there. It also makes tart things more balanced, and helps cancel out bitter flavors. Awesome, right?

The lesson here is simple: Salt will wake up the flavor of your food. How much salt is enough salt? You’ll know it when you taste it. If you taste a dish and it feels “meh,” pause to intentionally taste for the salt. Are you detecting it at all? Then add another large pinch. Taste it again. Keep doing that until you taste the dish and feel a *ziiiiiing!!!* That’s when you know you’ve got enough salt.

In restaurants, chefs know how to salt food properly. That’s what makes the food taste so good, and what keeps people coming back. I even salt my jam when I make it, and you’d be shocked  how much it can accent the sweetness of the fruit. It’s incredible.

But also, be careful. You can’t un-salt food, and if you add too much, that’s a quick way to make it super gack-worthy. If you add a little too much salt you can try adding more sugar or acid to balance it out, but ultimately, it’s better to not add too much to begin with. You do this by adding a good pinch at a time, then tasting. Don’t add a bunch of salt and then taste, which is a recipe for disaster.

I was teaching a baking class once and asked the students in one group to make fresh whipped cream. They combined the heavy whipping cream and sugar, then set it to whip in the mixer. When the cream was almost whipped, I went to add a little salt. The students shrieked… because they thought I was going to ruin their whipped cream.

So, I stopped the mixer and asked them all to taste the whipped cream. They did, and all agreed that it tasted like whipped cream should taste like. Then I added a fat pinch of salt and whipped it for another 30 seconds before asking them to taste it again.

The look on their faces was hilarious. It was like someone had handed them a surprise $500 check.

“OMG!” One student exclaimed. “This tastes WAY better than it did before. All it took was salt?”

Yup, the salt I added not only added a nice balance of gently salty flavor, but it also punched up the sugar in the cream, making it taste super well rounded. So instead of just tasting sweet, one student pointed out that the whipped cream now “tasted like sweet plus something special.” That’s the perfect way of putting it.

But wait. Some salts are saltier than others.

In order of saltiness, this is the order they go in:

Sea salt — the least processed, cleanest flavor, flakey/irregular shapes, great as a finishing salt after food is cooked, also the most expensive of the three.

Go ahead, prove me wrong.

Don’t believe me? Try it. Get a box of kosher salt and some table salt, then taste them side by side. Try one salt, letting it sit on your tongue for 15 seconds before swallowing so you can focus on the flavor. Look not only for saltiness, but for other flavors as well. How strong is it? How minerally? Do you detect any chemical flavors?

Now, swish some water around your mouth and spit, then taste the second salt the same way you did the first. Do you notice a difference between the two?

I generally recommend kosher salt for ALL cooking needs. While I like a good box of Maldon salt, the Trader Joe’s generic kosher salt tastes great, too.

So, watch the video to learn what a REAL pinch of salt is, and start keeping this in mind when you cook absolutely anything!

PROTIP: Add a generous pinch of salt to your morning smoothie and marvel as the flavors come alive in your mouth. It’s kind of mind-blowing all the places salt makes everything a lot better.