You might be surprised about the title of this post. “Hippy crack” isn’t exactly what one thinks of when wanting something warm and cozy to eat, especially since, where I come from, the term is reserved for the curious little nitrous canisters that recently took down Demi Moore. Back in my younger days, Whip-its were all the rage for anyone looking for a quick buzz – and even as an adult, I occasionally see someone hiding in the back corner of a party, passed out on the floor and drooling on themselves, surrounded by little silver bullets of laughing-gas love.

But this blog isn’t about inebriants, and least not of the illegal sort. Let’s get to the tasty part, the part about the raspberry flax and almond flour muffins.

Not too long ago, I was befallen by a virus of the worst kind; the type that wears you out for weeks on end, dragging your energy levels to subterranean levels, almost never to be seen again. I essentially laid on the couch for two weeks, eating nothing but pineapple and cantaloupe (when I get sick, those are the only things my stomach will hold). I was so tired that I could barely hold a book long enough to read, and even watching television was an exhausting exercise in having to concentrate far longer than my weary brain was capable of.

When all was said and done, I lost 8 pounds in two weeks. While that may be cause for celebration for some, I only weight 106, soaking wet, with bricks tied to my ankles. So, as you can imagine, losing 8 pounds was not only a bummer, but cause for alarm.

First off, I was suddenly freezing all the time. I’d wrap myself in layers, even in 60-degree weather, and still curse myself for not wearing wool socks. Second, none of my clothes fit. My jeans hung off my hips like the kids I see standing around outside the liquor store down the street, so that I had to pull my pants up by the belt loops 874928749 times a day. It was so bad that I ripped the belt loops clean off one pair of jeans. Fail.

I needed some weight gain, and fast. Still too weak to cook anything of substance but not wanting to resort to McDonalds and Kraft macaroni and cheese, I remembered that nuts and seeds are sources of healthy fat, but that en mass, they could account for some pretty serious poundage for those that were hoping to keep it off. Re-appropriating that weight-loss knowledge for the opposite effect, I made myself a batch of blueberry almond flour muffins. They were good, but I wanted something that would keep my still-sluggish digestive system moving. And when the world calls for fiber, the nutritional god rains down flax seeds from the heavens.

I dubbed these hearty raspberry flax and almond flour muffins “hippy crack” because they are so completely addicting that you can’t stop eating them, especially when they’re fresh from the oven, steaming hot, with a big pat of butter melting down into their nooks and crannies. They contain not a lick of flour or other grain, and consist entirely of whole ingredients (hence the ‘hippy’ reference). Dense and satisfying, these muffins are lushly tender, with a sweet nuttiness that makes them nearly impossible to stop eating. But beware: since each muffin contains a hefty dose of nuts and seeds, I recommend cutting yourself off after two, lest you end up wishing you could crawl into bed for a two hour nap. 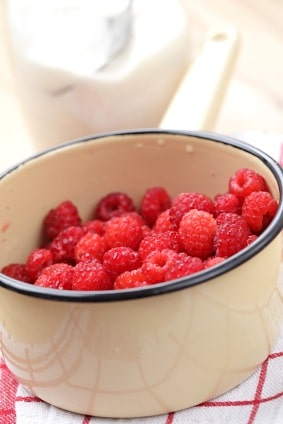 This raspberry flax and almond flour muffins recipe is perfect for breakfast, hot out of the toaster oven, smeared with butter and honey. I’ve been known to eat three at a time, then moan in delight. There is no flour or grains in these little nuggets of heartiness.
0 from 0 votes
Print Pin
Course: Breakfast
Cuisine: American
Prep Time: 20 minutes
Cook Time: 25 minutes
Total Time: 45 minutes
Servings: 12 muffins
Calories: 200kcal
Author: Stephanie Stiavetti