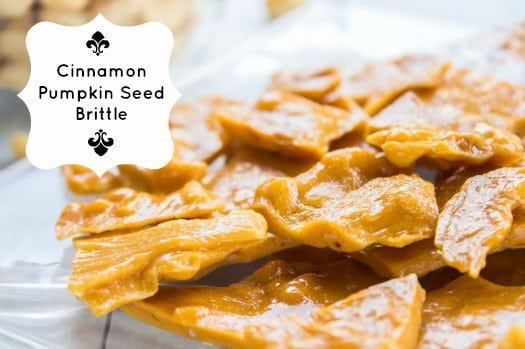 – This cinnamon pumpkin seed brittle recipe is for the discerning brittle lover only. –

Today, the intrepid Melanie McMinn is back with another sweet, tasty recipe – cinnamon pumpkin seed brittle. This exotic candy makes a great gift when wrapped in a nice gift bag and tied with a bow.

Take it away, Melanie!

Do you feel guilty throwing away pumpkin seeds? If you are like me, you pull them out of the pumpkin and say to yourself “I’ll definitely toast, roast, or do something else fabulous with these. Garnish soups with them, yeah. I know they’re good for you, I can’t just throw them away!” Two weeks later,  you find the greenly molding mass in the back of the fridge THEN throw them out. Until now.

With this stylish cinnamon pumpkin seed brittle, you’ll be showing your pepitas off. You may even find yourself heading off to the nearest Latin grocery store to pick up some for extra batches. And if you aren’t a fan of cinnamon, you can easily substitute cayenne or cumin for more exotic versions.

Most recipes you find for brittle call for corn syrup, but I adapted this recipe to remove that not-at-all-natural ingredient. If you haven’t heard, high fructose corn syrup (HFCS) is pretty nasty stuff. Take a look at a great post called Icky Ingredients: High Fructose Corn Syrup at Allie’s Answers. I knew I couldn’t find Karo down here in New Zealand, but I didn’t know HFCS is banned in a number of countries until I read that post. Learn more about HFCS from the great list of links at Daily Kos: Americans Consume 98 lbs Refined Corn Fructose/Yr. 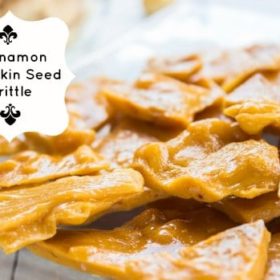 A note on cleanup: Once you've poured out your candy mixture and sprinkled your salt, put water in the pan you were cooking in and bring it to a boil. Use the boiling water to clean any other implements, spatula, thermometer, etc. If you use boiling water, clean up is a breeze. If you try to clean up with regular “hot” water, you could be scrubbing all day.

Previous Post: « Formica’s Best Slow-Cooked Beef Stroganoff Recipe
Next Post: What Is The Difference Between Macarons and Macaroons? »