– A super-fast orange chicken recipe for those “I don’t want to cook” nights. –

I have a ridiculous number of cookbooks – over 700 at last count, and that was over a year ago – so at this point I’ve become very discerning over which cookbooks I’m willing to spend my money on. I mean, you can only own so many baking books before you see the same brownie recipe pop up 15 or 20 or even 50 times. To say I have cookbook ennui would be an understatement. Or maybe it’s not ennui; it just takes a lot more to give me excited about a cookbook these days.

In case you think I’m kidding (and these are just the ones in the bedroom):

When I buy cookbooks now, I tend to look for those that are unique in some way, or teach me something I don’t know. Some of my favorite books cover a single subject exhaustively, diving deep into one topic and ferreting out everything there is to know about it. I never used to be a fan of single subject books, but now they’re the ones I look to the most.

Last year I found a really awesome German cookbook from two authors I’d never heard of before – it’s called The German Kitchen, by Christopher and Catherine Knuth. I featured it in a post about European cookbooks as Christmas gifts over a year ago, but since then I’ve had a chance to dig in and really give the recipes a workout. I’m always on the lookout for quick and easy dinner recipes that will make my life a hell of a lot easier, especially after a long crazy day, and one dish really stood out and became one of my weeknight dinner time staples. W00t! I love it when that happens, and it happens so rarely these days. (See above mentioned cookbook ennui.)

The dish below is an insanely easy-to-make orange chicken recipe that takes literally 15 minutes to put together. Seriously. And it’s so simple that even the cooking phobic can manage it without too much intimidation. I call it a “mini-braise,” and it’s a great intro dish for people who are terrified of cooking raw chicken. It’s a little sweet, a little herbal, and a lot comforting. I’m not sure if this is traditional German food, but for me it’s the epitome of quick and easy comfort fare for busy weeknights.

By the way… this is the first post that I’ve written using the dictation feature on my Mac. I’m still having a bunch of issues with my neck and arms, related mostly to spending time on the computer, which seriously sucks when you’re a busy adult living a digital lifestyle. A bunch of people recommended the program Dragon Naturally Speaking, but it’s mostly built for PCs and the Mac version leaves something to be desired. So here I am using the standard dictation feature that comes with the new Yosemite OS. Welcome to the 21st-century, I guess.

I’m really curious to find out if you think this changes my writing voice at all. I imagine it does, because you use different parts of your brain to talk than you do when you type. I’ve noticed that my grammar is different when I speak into my computer, and I definitely see a more”chatty” tone with lots of extraneous words and the vocal segregates. Also, this stupid thing tends to capitalize Random words for no reason, which is maddening, and occasionally adds and deletes spaces to match its own bizarre grammatical whims. Seriously, WTF is up with this thing?

And you know what’s really funny? It knows what WTF it is. And when I say “W00t,” it automatically inserts zeros where the Os would go. Heh.

So, spill it. Does this post have a weird tone to it? Do I still sound like me? I genuinely want to know. 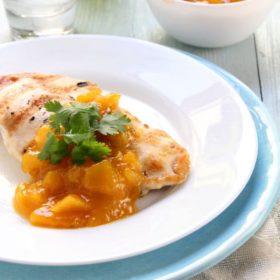 Called Orangen-Honig-Hähnchenbrust in German, this zesty, aromatic orange chicken recipe is low in fat and simple to prepare. You can easily throw this dish together in less than 20 minutes, making a healthy, easy weeknight supper when you're looking for something delicious without a ton of work. Serve with baked potatoes and fresh apples if you're really looking to spruce it up with almost no additional effort.
0 from 0 votes
Print Pin
Course: Entree
Cuisine: German
Prep Time: 5 minutes
Cook Time: 15 minutes
Total Time: 20 minutes
Servings: 4
Calories: 362kcal
Author: Christopher and Catherine Knuth, modified by Stephanie Stiavetti